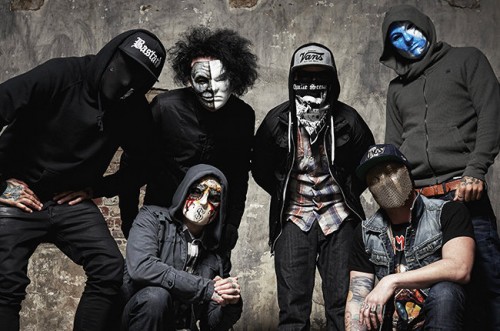 Sirens are blaring somewhere outside a venue in Chicago and I ask Danny from shock rap rockers Hollywood Undead if the po po are coming for him?

I’ve just checked in with Danny by phone while he lingers outside The Underground in Chicago on the band’s tour in support of brand new album Day Of The Dead. Their fourth record is a big, smart AND dumb blend of dance music, rap and hard rock elements with the band being able to take the piss and also still try to connect to fans on a real level at the same time.

“Jordan was like, you’re way more metal than me, man. You talk to Metal Riot,” jokes Danny. “It’s lookin’ good for tonight. We’re playing a nice sold out show. It’s been a fun tour so far. We all have our own ways to get ready for a show. I bring in my stereo and have spotify mixes. Usually before we go on we put on funky shit like James Brown. That’s been the ritual for like three or four years now,” he laughs.”

Today I was reading a gross article on Lambgoat about how Disney has banned outstanding fast thrashers Warbringer (one of the hardest working bands in METAL!) from playing a House Of Blues show due to content and imagery. What a complete dis to the subculture. That kind of gestapo-mickey mouse behavior on Disney’s part not only makes me nervous the new Star Wars movies will suck but also is pretty pathetic from a corporation that bought family friendly Miramax (There Will Be Blood, No Country For Old Men, Pulp Fiction)! Oh, I forgot it’s “Ok” to discriminate in the USA now. So…YEAH… it warms my heart today to be promoting a record that has fun with slow blunt smoke, glitchy ear rattling electronic elements and lots of cussin’. 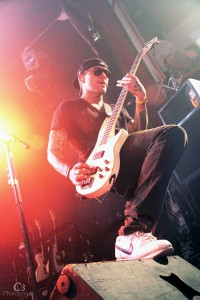 Seriously, fucking stop the bullshit America. Can we all please get along and have a good time. David Draiman of Disturbed will be on Twitter calling out the Trevor Noah dude replacing Jon Stewart on the Daily Show for being anti-semitic one minute for Noah saying in a tweet joke that Jewish girls don’t like to give oral sex, but then Draiman defends the free speech angle in #Gamergate of some gamers who are seriously fucking bullying, homophobic and sexist. I’m not poking a stick or taking shots at Draiman like a lot of media outlets do. I think he’s well meaning and I’m a big fan of the Device debut (and some Disturbed, which most journos who write about black metal AND/OR doom most of the time would never admit or feel). Just saying that on numerous sides we all need to take a deep breath and try and lighten up a little, though also respect one another as different people/genders/faiths or none, etc. 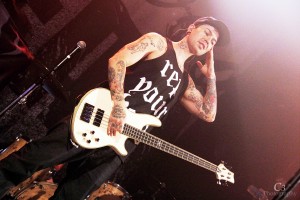 Hollywood Undead’s hooks and party choruses bring people into their songs even if more of the raps are hard edged or bolder language/themes than some people are accustomed to. There’s a lot of violence in the country and very sorely hurt feelings. How do we remember to party together and that not all words shuld cause us to fight one another? Like some people think White People should never rap or that all cops are bad or that it’s ok to racial profile black men. It’s all fucked up.

“Totally, man,” reflects Danny. “We’ve got all kinds of fans. Every nationalities. Every show we play I see different ethnic groups. We try not to get too involved in that kind of shit. We do what we and write the kind of shit we like and the fans get it. We’ve got a cool following. They’re die hard for sure. We’re really stoked to have them. It’s a trip. It’s a really good feeling, a crazy feeling. I feel blessed like we’re all one big family, kinda thing.” 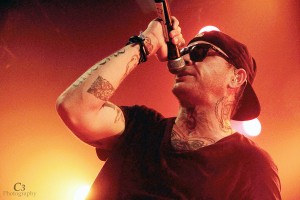 With new album Day Of The Dead, has the HU sound crystalized to place they’re happy with?

“Yeah, man. Over the years we’ve really honed our sound,” Danny says, brightening up. “Day of the Dead is a fun song to play live. It’s one of those songs that really comes across live to. There are songs sometimes that sound great on the record but you have somethig missing for the live option. This one sounds just like the record or better live. Fast tempo, keeps the crowd going. I really love playing it.” 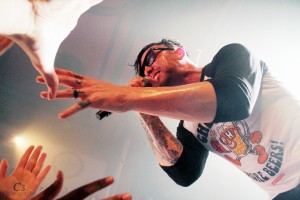 Some of their songs are more Scarface cinema type songs or others like boastful club songs.

“There’s something for everybody but on this record it’s a lot more straight forward, I think. We’ve been opening up with the song “Usual Suspects” from the new album. It’s really going off live. A lot of us in the band listen to all different types of music. Some people have been saying it sounds like dub step but to me it’s all guitars, not fuckin’ around with that one. From top to botom about thirteen months went into this record. Three of us have studios in our houses. We demo our songs like that. Johnny has a lot of great chorus ideas too. Everybody comes in together. We bring our songs to the table and whatever ones we feel are tunes we should take to the next level, we bring ’em to the producer and start to get them beefed up. About six moths towards the end of the last record cycle we were writing.” 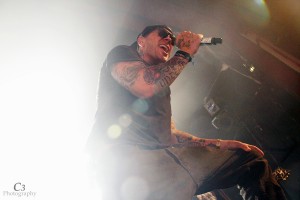 How’d it feel working as a team on this? With so many vocalists involved or members, it makes it more of an experience or group effort, I’d imagine. I can relate to the work ethic acts like Mushroomhead, Slipknot or Hollywood Undead put in.

“Yeah. We sit down and have the song first. We critique each other on whatever the parts are calling for. We try not to let anything get away without being the best it can be before it’s put down on wax and recorded, y’know?” 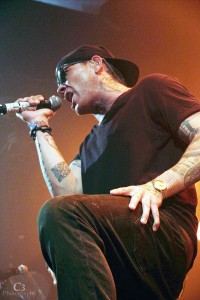 The Hollywood Undead vision continues to corrupt the you on Day Of The Dead, a fun and energized record fans of everyone from Linkin Park to P.O.D. to Ty Dolla $ign to Sleeping With Sirens could dig. Big hooks, a mash up of styles and a horror rap/rock image. 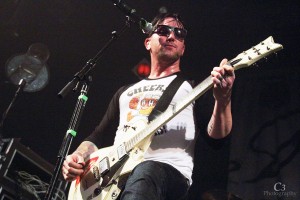