Interview: Ides Of Gemini – Back to Life, Back to Reality 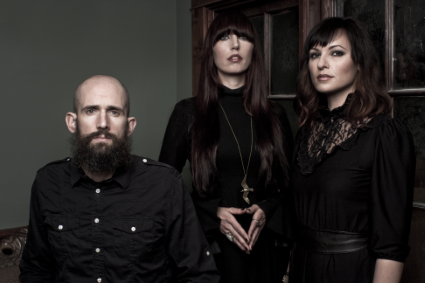 Ides Of Gemini are a constantly evolving mosaic, a poem of high magnitude and natural reverence.  Listen to “Seer Of Circassia” from new Neurot release Old World, New Wave and you will marvel at how both history repeats itself and everything changes. While comparisons to Sub Rosa or Dead Can Dance have some merit, there has never quite been music like this before.

It was a pleasure to speak with IoG’s Jason Bennett (also of Decibel Mag) about the deep alchemy of this musical brew, ideal  for both celebration and brooding. 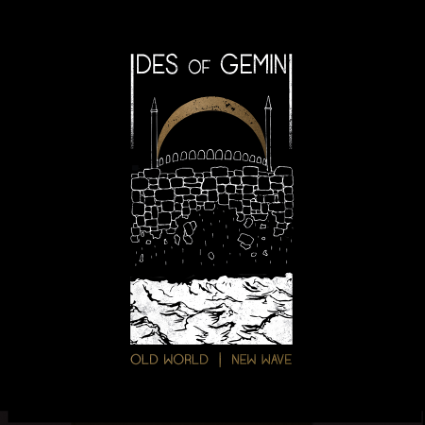 Long first question, buddy. Someone like J Mascis from dino jr., deep wound and witch is allowed to do whatever he wants (and rightly so), on any instrument, for example. But for a long time there was more of a taboo or it has been less frequent to see musicians who also write in recent times. But the late great genius mick farren, the legendary lydia lunch, richard from drugs of faith/agoraphobic, rollins…they all crossed that barrier. What drives you to both make the art and critique it as a writer? I find myself in the same boat, a singer and music journalist for 20 years and have worked with some of my biggest heroes like bad brains or getting to meet the son of jazz great lionel hampton and jam with him. Just cool shit. I remember reading a Rollins thing once where he was talking ’bout how some people in his life never understand why someone would be, say, obsessed with obscure Blues 45’s or Howlin’ Wolf, but that it is a valid way to live, if people understand or not.

The drive to write about music comes from the need to avoid a regular job at all costs. I worked many a shitty job when I was younger, and I realized pretty early on that it wasn’t for me. I also knew that I had very few marketable skills and that music is one of the things I enjoy most in life. I seemed to be able to write decently—at least as well or better than many of the folks who were writing for the local music mags at the time—so I figured I’d take a crack at it. Except for the whole money situation, it’s worked out pretty well.

As for the drive to make art?  I don’t really consider myself an artist. Sera and Kelly are the artists in Ides Of Gemini. I view what I do, which is largely composition and arrangement, as a trade—not much different from what a carpenter or a mason or a blacksmith would do. Skilled labor, essentially. Though I suspect the “skilled” part is up for debate in my case.

Is it a valid way to live? For me it is. And it’s too late to turn back at this point, anyway—even if wanted to. Which I don’t. So I appreciate Hank’s sentiment there. No flies on that guy.

Early Ides, from what I’ve heard, seemed to be a bit more vocally oriented, while now the emphasis seems to embed the vocals within the full soundscape a bit more. Do you feel that’s accurate or is it a generalization on my part? Also, what is your favorite song on Death’s Symbolic, haha? Just curious.

I think that’s a fair assessment of the early Ides material. Sera’s vocals will always be the most important thing in this band, at least as far as I’m concerned. It’s her voice that inspired me to start making music in the first place, and every song I write for Ides is done with her in mind. I think the difference between the old material and the new record is that we’re all better at what we do now, and we work much better together as a team.

I couldn’t even tell you the last time I heard Symbolic. I’ve always been more of a Spiritual Healing kind of girl. 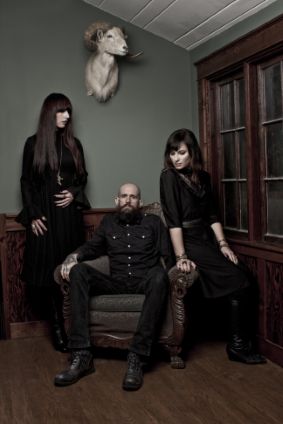 Karen Durbin wrote a famous piece, “Can The Stones Still Cut It?” in 1975. Village Voice. It was about how women on the tour had to play by certain rules. How far do you think gender progress has been made in the “industry”? Is this beaten to death as a topic? I like how a journalist like our mutual friend Kim Kelly has made it a point to kind of re-assert that people classify all musicians as musicians first and their gender as a secondary issue.

The topic might be beaten to death, but it could always use a few more kicks to the ribs just to be sure. The idea that we’re suddenly living in some sort of bullshit “post-gender” utopian society where nobody takes note of anyone else’s sex organs—no matter how prominent they may be—is rosy but unrealistic. People are welcome to identify themselves however they’d like, obviously, but audiences definitely notice when it’s a woman up onstage instead of a man. The local steakheads still yell “show us your tits!” and that’s probably not gonna change anytime soon. But progress? Sure. The proof is in the pudding: There are more women playing hard rock, punk and heavy metal than ever before, and I think it’s likely that they’re taking slightly less shit for it as well. But I think most of the progress comes from more women not giving a fuck about what people might think or say than mass audiences changing their own behavior.

What can we expect from live performances during this stage of the band’s ongoing development/chrysalis?

Definitely better. Hopefully bigger. I want it to be a real spectacle, with pyro and lasers and flying unicorns and shit, but I’m guessing I’ll get outvoted on that score.

How do you feel about the rootsier, more Americana side of folk metal taking on more life in the public eye the last few years with Musk Ox, some of what your band does, Blood Ceremony, Panoptikon? Even some of the Wolves In The Throne room less cosmic and more foresty stuff. Sabbath Assembly also come to mind,who are such a huge force for musical good. Harmony/disharmony working in conjunction. I remember I dropped out of a sociology class to open for Orange 9MM once with an old band of mine, Fuse. My teacher gave me an ultimatum that it was a mandatory test day, the day of the gig. I never went back and got into music journalism more instead, guerilla style/D.I.Y. Because I realized our music scene IS sociology and I needed to be more embedded in it.

I don’t follow a lot of that stuff, to be honest. But I do enjoy Blood Ceremony quite a bit. Their song “Goodbye Gemini” was a big hit in the van on the last Ides tour—for obvious reasons. We met them and hung out with them a bit in Toronto on that tour, which was not only a treat but also a nice little notch in the lattice of coincidence that holds us all together. I can only add that I saw Orange 9mm play at the Middle East Club in Cambridge, MA, in 1996 or 97.  If memory serves, my review of that show was the first thing I ever had published.

Nice! Do you think of Ides as directly in conversation with your environment or the places you live and frequent, or is it more to be seen as a ritual or excerise in the art inhabiting its’ own space, like walking into Jumanji with Robin Williams, to use a bad example, hahaha. (note: these questions were sent to the band well before news broke of Robin’s passing and J. got them back to me after the fact).

I’m typing this about three hours after learning that Robin Williams has killed himself. What a huge bummer. The man was a true talent, one of a kind. Did you ever see World’s Greatest Dad? If not, you should stop reading this interview and do so immediately. But to answer your question, I’m not really sure. I never saw Jumanji.

Is the making of art, itself, an assertion that taboo is silly and creativity is paramount? Is there any merit in some conservative concerns, obviously not ones that escalate into huge religious wars or class schisms? Can we fast forward to the Age of Aquarius soon or is all this bullshit still really necassary? I’m just so tired of living in Purgatory with human kind and trying to keep the PMA, y’know? fuck, man…

You mean conservative concerns like the ones Tipper Gore had about, like, Twisted Sister? No, none of that shit is valid. Hydra Head Records had a fantastic slogan when they were around: “Don’t like it? Don’t buy it.” If everyone had that attitude about music and art and literature, the world would be a better place. Not to mention a far less shrill and annoying one.

I love Twisted Sister. Ojeda is a nice guy. “The Chalice & The Blade”. Can you discuss the song’s composition or the themes or Tarot significance?

I could tell you what I think it’s about, but I didn’t write the lyrics so I should probably keep my trap shut. I suspect Sera wouldn’t want it explained outright, anyway. Sucks the mystery right out of it. But she reads tarot for a living, so I’m sure there’s some heavy symbolism going on in that department.

Compositionaly? I’d just sound like an asshole trying to explain how I imagine it. But the intro riff has an obvious influence that somehow didn’t occur to me until after it was written. And I nicked the title from a book that Sera was reading at the time. I’m not sure if the lyrics actually have anything to do with the book, though—I chose the title before she wrote the lyrics. Sometimes I’m a fascist like that.