Interview: IKILLYA – Taming the bullshit with endless riffs and drive 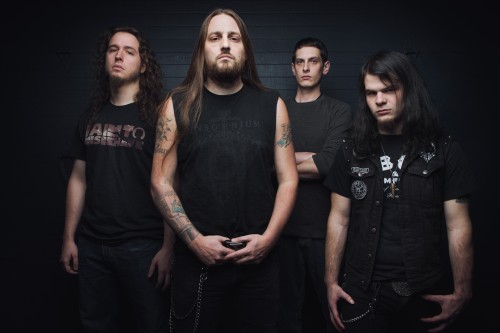 “I’m hoping as a culture we can be better than to stoop to rap feuds. It’s all of us against idiots like the Westboro Baptist Church. Let’s not let the tiny difference between Grind and Thrash get in the way of that.” – Jason Lekberg (Vocals)

IKILLYA are a band really on point with their press kit, drive and pro but genuine and simultaneously self-invested but scene supportive methods. Talented vocalist and industry navigator Jason Lekberg has some serious knowledge he drops in this interview and I’d recommend all metal fans, bands or industry types read and heed his words in regards to goals, artist development and persistence BELOW.

1.What is an iconic heavy metal song intro or riff that caught your ear as a kid? I honestly was pulled in by “Sweet Child O Mine” and the intro to “Livin’ On A Prayer”.

Jason (Vocals)—The first band that really grabbed me was The Beach Boys. Though they’re not metal, their innovation in melody and song writing was integral to my evolution. The first rock song that grabbed me though was “You Give Love A Bad Name” by Bon Jovi. When I discovered Metallica and GNR though – it was all over. It wasn’t as much songs with them. It was albums. They just slayed me.

2. We’re cut from a similar cloth then, pal. What was the most valuable lesson in presentation or professional discourse with business types as someone interested in underground and mainstream metal that you learned during your time working with a Major Label and bands like Mudvayne and Lamb Of God?

J —Though it won’t always mean you get what you want, the most important thing I learned was a reaffirmation of the value of honesty. There are many times when you will encounter people who are dishonest in this business and it will be enticing to do things like lie about your draw or to try and inflate hype about your band. At the end of the day though, you have to deliver on all of those things and it will catch up with you. Be patient and focus on being great. There are only 3 possible outcomes. 1) people love you 2) people hate you or 3) people don’t understand now, but will later. If you’re an artist, the only response to all 3 of those is “keep going”. So keep on truckin baby.

3.I could not agree more. That should be Band 101 lesson for acts these days. And honesty/trust are the best commodity.  As a pretty high energy performer, do you find movement affects how you nail a note or if you get tired and can’t? Or is it not a problem when screaming more?

J — First, thank you! I am honored to be viewed as a high energy performer. I spend a lot of time working on being more active. It absolutely effects the notes I sing as being too active means I’m out of breath. The type of screaming I do requires just as much air as singing so it’s all the same. I try to work out and stay healthy as well as have spent many years working on my singing/screaming so that I can keep increasing my energy level. I feel that as a singer the notes I hit are more important than running around so if I get tired, I’ll stop moving and focus my energy on hitting the notes. I owe almost everything I know to Melissa Cross as well. If you’re a singer, she’ll change your life. 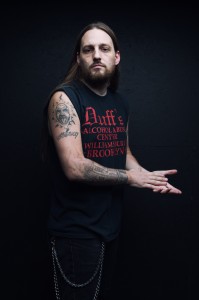 4.Could you pontificate on where you think metal is headed and why you prefer the style that you play in IKILLYA (as well as why it “feels” right for this band)?

J—I have absolutely no idea where metal is headed. My favorite part about metal is that every other genre is represented within it so I’m just looking forward to more of that. Though I’m not a big fan of most of the Djent bands, I love the fact that it’s really bringing the focus on musicianship. Metal has always had great players so it’s awesome to see a younger generation really celebrate them. As far as why it feels right to play IKILLYA’s music, it’s just because it’s honest. We do a bit of discussion about what kind of band we are and want to be but there are no limits on what’s brought into the writing sessions. We have a set of rules that hang in our rehearsal room and #2 is “every idea gets tried”. I love writing with these guys because the different opinions create music I would have never written on my own which pushes me as a singer. I prefer to listen to a piece of music and think “what the hell am I going to sing over that?!” I like to be pushed. We don’t really write to fit a sub-genre. We just write what moves us and hopefully people dig it.

5.Are you writing songs currently? What’s up?

J — We are! We’re 6, almost 7 songs into the new album already! I already feel like this will be the best album I’ve ever been a part of. It’s always been a dream of mine to write albums with a focused theme. Not concept albums, but albums that are cohesive. The first 2 IKILLYA albums, for a myriad of reasons, ended up being a bit more like a collection of songs. I love both of the albums and am proud of them, but they weren’t as focused as I’d like. This new album started from a thematic inspiration and the whole band is really excited about it. It’s going to have a lot of interstitial soundscapes so that it really feels like an album experience. I don’t want to get too specific just yet as we’re still building it but it’s feeling really good right now. We’re hoping to record it later this year and release it early in 2016.

6.People in metal are banding together more with large, multi sub-genre package tours and stuff to sell merch and keep metal knowledge alive and financially viable in an age where touring is often how band’s make or break it and survive in the days of less music compensation. But often you still see fighting between thrash fans or grind or deathcore or whatever. IS that just inevitable, like hip hop feuds seem to be? Not that you don’t have Russell Simmons or Kendrick, Vulkan The Crusader or Pharell and others with a good social message and less emphasis on fighting.

J — Humans are tribal and I believe that is exacerbated in an underground culture like metal. Metal is a lifestyle, not just music. The bands you like define how you feel about yourself and many times what you wear, how you look and who you hang out with. Unfortunately, that means that some people will take it to the extent that they need to define tribes within metal. My experience is that within the musicians this is far less the case. People like Jacoby from Papa Roach will hang out with Vinnie Paul from HELLYEAH – and have mutual respect. I hope that those who are fans of metal will look to relationships like that and follow their example. Anyone who is willing to make the sacrifices needed to be a professional musician has the same dedication and passion for their art you do. If for no other reason, you can respect that. I’m hoping as a culture we can be better than to stoop to rap battles. It’s all of us against idiots like the Westboro Baptist Church. Let’s not let the tiny difference between Grind and Thrash get in the way of that.

7.What is a metal fashion style that you find hysterical? It is often funny at NEMHC Fest and other fests how almost every single person is in a black band shirt.

J — I don’t really think any of them are hysterical. (Author’s note: I’d rock a Manowar loin cloth to the local Mall). I definitely understand how silly many of them look. Hell, I wear a wallet chain and have a jacket covered in patches. Some people would view that as silly. I’m glad to see people who are passionate enough about a genre to make it part of their physical appearance. When I was a kid if you didn’t have long hair and boots I didn’t want to know you (unless you were female) but that was just due to my own insecurity and need to feel surrounded by people who made me feel normal. Now days I like good people – no matter what they look like.

8.Would you rather have deadly riffing or a sick guitar solo? Or is it just not enough to have one without the other?

J — That’s a tough choice! I actually prefer riffs that are so deadly they’re actually a sick solo at the same time. haha. The stuff Eric is writing now definitely falls into that category. I will say though that I’m all about dynamics. A simple riff will help that intricate solo have much more impact. I’m thinking about this as I’m writing, so I guess if I had to choose, I’d say a riff over a solo. I listen to several bands that don’t have solos but not many that are all solos. So yeah, that’s my answer. ha!