Interview: Insect Ark – Playing with lights in the darkness 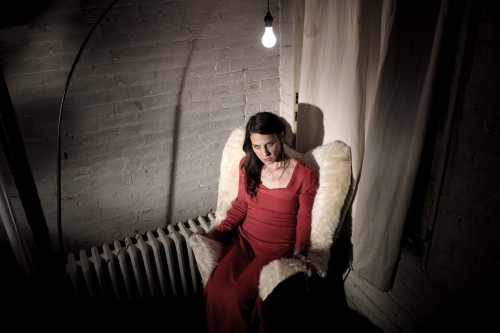 I’m probably the last person on earth who can tell you what Insect Ark sounds like. Maybe it’s my mirror of the world, which I see as beautiful and threatening at the same time.- DS

Dana Schechter (Bee & Flower, Angels of Light) has begun a new chapter with her Insect Ark project, a thrilling foray into mysterious and unnerving experimental, doom influenced music. First album Portal/Well is sure to put the goosebumps on the arms of any listener with the cajones or wanderlust and courage to travel along with Schechter on this freaky trip. Unison, Locrian, Swans, Tearist, Rasputina, KK Null, Helen Money, Scorn or The Body fans…anyone with an ear for the uniquely unhinged, needs to check this project out NOW.

Read this exclusive interview BELOW.

How are you today? Portal/Well is a real adventure. The cover art reminds me of Narnia or Through The Looking Glass, kind of a willful step into the unknown that is on some levels “known”, the deep psyche. But some of the music really is also physical. What was it like crafting this? The art is for a 6 panel cd? (Artwork by Nicole M Boitos Hayworth/Simple Box Construction/Dana Schechter).

Hey Morgan, I’m fine, thank you. I just got back from an all-day rehearsal, my drummer Ashley & I are leaving tomorrow for a batch of US & Canada tour dates.

For the album artwork, I wanted to find something that made you feel like you were inside looking out – or outside looking in. It was an effort to visually manifest the place that I feel the music lives – half in a floating dream, half running headfirst into a brick wall. I like to make weird little pieces of music, and heavy, crushing songs as well. I enjoy the balance that creates.
For the album art, first I asked my friend Nicole Boitos Hayworth if she could make a diorama inside an egg, which was based on drawings that I’d done; she built the diorama in a goose egg, and sent me the photographs from her home in the UK. I contacted Kamil Antos (aka Simple Box Construction/ A Death Cinematic) and asked if he’d allow me to use some of his tree photography. I took these elements and I built a digital composite, out of layers of tree photos and Nicole’s egg diorama. I’m fans of and friends with both of these artists, and I’m really happy with how the final art came out.
How does it differ writing for this as opposed to Bee and Flower or with Gira? I mean, obviously they involve different roles or sounds.

From writing for Bee and Flower, it’s not drastically different. By that I mean, I sit down to write, and if something good happens, I follow the thread. In a way, the similarity kind of stops there. The structures are very different; Insect Ark is more open-ended and less ‘song’ based than Bee and Flower. Another major difference has to do with being able to perform the music at shows; since I’m constantly switching instruments and the the goal is to play it live, this brings certain limitations – and certain advantages. But yes, I do compose differently than if I had bandmates who also help define chordal and melodic structures.
With Gira, we built our parts around the structure of a song he’d brought in, with the song’s form already predefined. He also had ideas about how he wanted the song to sound, so that alone is quite a change from starting from zero, when you write alone. That said, the process of responding to things as they develop and building on them – whether you write it all yourself, or in a collaborative group setting – is pretty much the same in all cases.

I personally love the weird corners where folk, trance, noise and heavy music meet. Like Locrian’s records or Merzbow working with Full of Hell or Tool. Or even cellist Helen Money touring with Agalloch. Does it feel like a good time for these weirder strains of musical plants to grow? For me I grew up in Woodstock, NY and always had the folk or The Band side, but was trying to explore darker sides in my band’s sounds growing up. But doesn’t mean I had to HATE other more mellow stuff, y’know?

I know what you mean, and I feel that the metal community is really open minded to music that doesn’t neatly fit into any certain genre or camp. I’m a fan of many different styles of music, but I don’t really analyze my own work at all: half this, part that. I don’t often sit down to write thinking, I want to write something heavy or something soft. Of course once a riff or a section feels good and has its legs, I’ll steer it into a direction, but it’s more about helping a song find it’s way. Sometimes I just feel like a vehicle; with some patience, the sounds and shapes reveal themselves.

I love that parts of “The Collector” remind me of like Steve Albini era Pixies drum sounds on a weird loop with ambient noise and this building doom. It has that kind of “Wave of Mutilation” sexy ghost surf shit going on at some weird level buried in there, IMO. It still has this forward momentum or groove like in some instrumental or soundtrack stuff or like DJ Shadow, lol. But you’ve got all these ear and mind opening textures in there/ I can imagine this creeping out of a subway tunnel, the noise growing louder and startling people.

That’s an interesting take on it. I do enjoy layering sounds and textures, and playing with dynamics and experimenting with form. I take it as a compliment if someone tells me the music makes them feel uneasy or disturbed. But I don’t mind how people interpret it, I’m not trying to tell them what it “is” or how it should make them feel. One of my favorite things about instrumental music in particular is how it lets a listener define their own narrative.

Did you ever listen to Stereolab or like , on the louder/harsh end, any Scorn stuff? Feel like there’s a cool thread between what you’re doing with sound composition and layering or even some kind of dub/trance influences at the base of it.

Stereolab, not so much, but Scorn, for sure. I love art forms that transports you and consumes you. It doesn’t matter if a song takes 30 seconds or 10 minutes to build momentum and hit its stride, or if it is a series of simple repetitions.

Are you looking forward to your upcoming Brooklyn show? Sorry, that’s a softball. What’s the most fucked up thing that comes to mind when you think of NYC? Now the loveliest?

Oh yeah, absolutely. It’ll be the record release show for Portal/Well. It’s also Ashley’s first NYC show on drums, as well as the last show of the tour. I can’t think of a better place to do it than St. Vitus.
There are a lot of problems with trying to live in this kind of urban environment. I try not to dwell on it, but the rate of urban development and gentrification is crazy. NYC is far from perfect, but it suits me. I like the crazy energy it has, and when i get pessimistic, i think of the sense of history here, all the feet that have walked these streets. It’s like a living, breathing map of humanity. 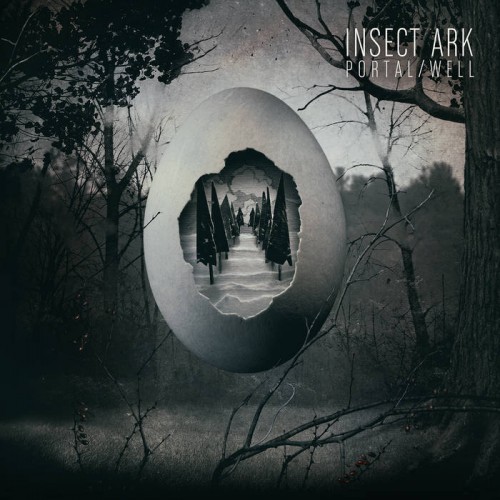 What do you intend intuitively for this project to represent in your life? Kind of a chapter of expression, I guess like all bands? Or an ongoing sort of love story with this cinematic fevered kind of collecting of sounds? Do you ever feel like a reporter when writing? Like revealing things less known?

I’m probably the last person on earth who can tell you what Insect Ark sounds like. Maybe it’s my mirror of the world, which I see as beautiful and threatening at the same time. Right now, this feels like the sounds I had been searching for inside myself for a long time, but I know it will keep developing. I like not knowing where it will go. Making any kind of art is a lesson in patience and self trust.

When you are watching a film or even if is silent and you’re outdoors somewhere, do you ever get a jolt from some impression and have to go run and create or jot the idea down? Or is it more a building up of momentum for you that is released upon deep reflection and delving into the “Portal/Well” of your creative center?

I get inspiration from all over the place. I don’t listen to a lot of music, really. Art and film leave their marks emotionally, if not with sound. The sonics of nature and city – water, the sound of a bird’s wings, trains, machinery, people’s voices – they all seep in and go into a subconscious hidden corner of the brain. I’m suspecting that these elements get all smashed up & influence each other, and how they manifest themselves is a mystery I enjoy, and don’t aim to question. That said, it seems to begin with how you experience the world and how you let it filter in, and how you shape it when it comes back out of you.

thanks!!!
Thanks to you too Morgan!