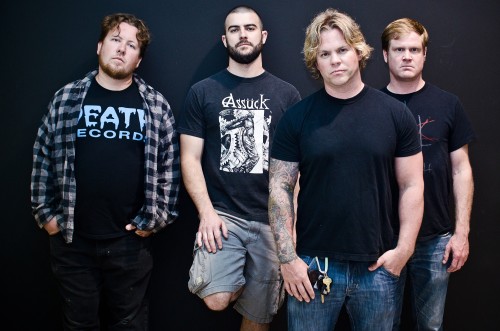 What is there to say about grind titans Pig Destroyer that has not already been said at this point? In my estimation, they are one of the most interesting and innovative bands currently residing in extreme metal. With Scott Hull’s schizophrenic, pummeling and tasty licks, Adam Jarvis’ inhuman skills behind the skins, and of course J.R. Hayes’ demented vocals and top notch lyrical ability, these guys remain a force to be reckoned with after more then fifteen years as a band. As far as I’m concerned, whatever these guys are having for breakfast can be considered news.

With the addition of their first bass player, John Jarvis (Cousin of Adam). it seemed like as good a time as ever to see what’s new in the Pig Destroyer camp. Just a little over a year after the release of their latest Relapse album, the crushing Book Burner, the gents from outside our nation’s capital (Scott Hull for President anybody?) show no signs of slowing down with new tricks up their sleeve. Frontman and wordsmith, J.R. Hayes was kind enough to take five and answer some questions regarding the decision to add a bass player, the band’s plans for the upcoming year, and other various business.

Being a fan throughout the years, it seems that with each new release that more press and anticipation follows them. What would you attribute the increased buzz to if you had to guess?

I think the band has enjoyed a slow, steady climb over the years. I’d like to attribute it to quality releases, a good live show, an absurd name, and our amazing fans who are so passionate about the band. Maybe it’s just dumb fucking luck.

How long had you been talking about acquiring a bass player? What made you decide after 16 years as a band to add one?

Not very long, actually. It was kind of a gut move. I shot the idea by Scott one day just to see what he would say, and he said he had been thinking the exact same thing. That kind of thing happens a lot with me and Scott. We figure, if we’re thinking the same thing at the same time, then there must be something of substance there, something worth pursuing. It’s been a lot of fun so far.

3. I heard you recently mentioned doing an EP of slower material. Would this be in the vein of Natasha or separate songs?

I wouldn’t put too much stock in those hearsay comments. We always talk a bunch of shit about doing this EP, or that split with band X. We can make all the grandiose plans in the world, but when it comes time to write, you just have to go with what moves you at that moment. We could sit down with the intention of writing a doom record and then five minutes later want everything to sound like the Circle Jerks.

What has inspired that direction? Any bands/releases influencing that decision?

We’ll have to figure out what direction we want to head in before I can answer that. We definitely want to utilize the bass effectively and bring more of Blake’s chaos into the mix.

Being as you had covered Void’s Who Are You and that you are from the Baltimore/DC are with a rich heavy music history from old hardcore to doom; How much have those bands/genres influenced you over the years?

An immeasurable amount. Bad Brains, Minor Threat, Deceased, The Obsessed, Fugazi…the list is as long as my arm. 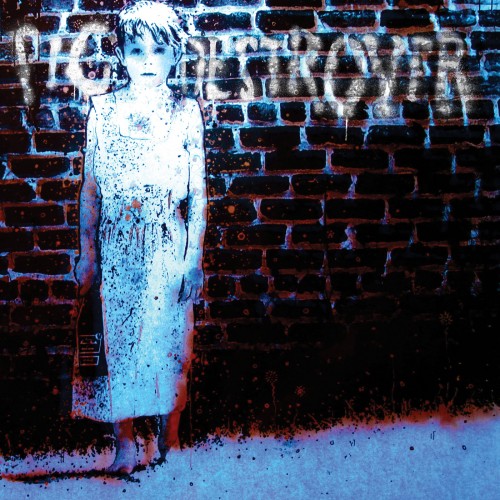 With Book Burner getting rave reviews all around, do you think you will try to capitalize on that album’s momentum and get a new full length out within the next couple years or do you prefer going at your own pace regardless of buzz, etc?

For the most part, we always work at our own pace. The record gets done when it gets done.

Do you think you will expand upon the leaner, grind sounds of  Book Burner or are there other avenues and styles you are looking to explore?

We’ll have to cross that bridge when we come to it.

What new songs are you finding the most fun to play live?

With some of the lyrics of The Baltimore Strangler, it sounds like you are addressing the accusations of misogyny thrown your way over the years through the character in the song. Have you felt compelled to explain your lyrics to avoid people’s misinterpretation?

As far as I’m concerned, there is no such thing as misinterpretation, there is only each individual’s subjective interpretation. It means whatever they want it to mean. That’s what art has always been to me.

What sort of feedback do you get from female fans about your lyrics?

For the most part, it’s been very positive, but I’m sure there’s plenty of ladies out there who are not happy with me at all.

For Scott, how is the new Agoraphobic Nosebleed coming along? You have mentioned that you have been influenced by Am-Rep bands for the new one. What bands from that era have you been listening to that made you want to take the new material in that direction?

Knowing Scott, he’s probably been rocking some Jesus Lizard, some Unsane, probably some Blast and Black Flag. I’ve heard some of the stuff and it’s totally sick. I think there is going to be an EP centered around each member of the band. The Scott EP in particular is pretty out there. I think some minds might get melted.

What can we expect from Pig Destroyer in 2014?

Hopefully an EP of some sort and some more cool shows.

Any shows/tours lined up for the new year?

We’ll be in NYC at St.Vitus in January, beyond that I think things are a little fuzzy.

Any parting words to your fans?

Just thanks for supporting us! And check out the State Property EP by Sex Prisoner. The most exciting powerviolence band I’ve heard in a good long time.

Thanks again for your time. Look forward to catching you guys again when you hit NYC.

Thanks for the interview. Cheers.