Interview: Jucifer – The Object Of Power 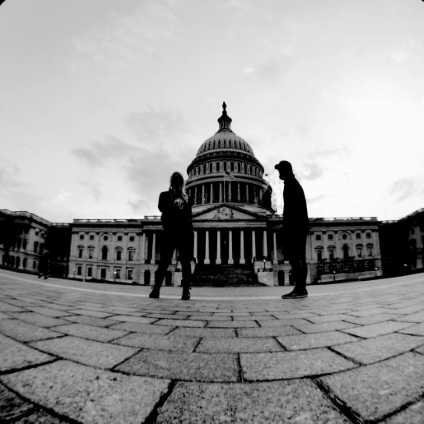 When I was a kid, like in the early 80’s, I observed that fucked up stuff in history often seemed to happen near turns of centuries.  So I’ve been predicting for much of my life that stuff here was gonna get dicey right about now. – Gazelle Amber Valentine

Jucifer are back with the all-killer District Of Dystopia. Perhaps their rawest record ever, the album focuses on Washington, D.C. and the shitty political environment (each song responds to laws passed by Congress and/or to presidential Executive Orders). This 4 track recorded face melt fest was recorded by the band themselves in their RV and is heavier than the bulk of 2014’s actually pretty stellar recorded metal output. 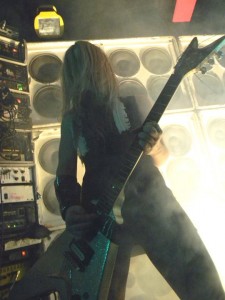 District Of Dystopia lands at a critical time for our country, but amidst an environment people are perhaps failing to rise to the occasion and smartly face. Is the spirit of protest still strong or is the spirit of apathy perpetuated by powers interested in keeping people off the streets? When will “patriots” learn about the class war and Ben Stein realize his fake packaged version of the U.S.A. is just a side of meat for the Federal Reserve to carve chunks out of?
Historically, apathy seems to prevail among people in the mainstream — until suffering becomes too mainstream to ignore.   When I was a kid, like in the early 80’s, I observed that fucked up stuff in history often seemed to happen near turns of centuries.  So I’ve been predicting for much of my life that stuff here was gonna get dicey right about now.  There does seem to be a lot of strife and tension, for sure.  We have a sort of emergent youthful revolt against oppressive forces, helped along by social media… then of course there’s the backlash, driven by fear and reinforced by those who benefit from status quo, of folks who think they’re “moral” or “normal” or “right” to impose discrimination against other folks.  Many of us on the anti-oppression side wonder how it’s possible that we’re re-fighting battles for women’s rights, for disabled and LGBTQ rights, and against Jim Crow reminiscent voter I.D. laws and escalating police brutality and xenophobia.  When will humans learn?  Maybe never.  Our track record basically sucks.
Mid term elections just happened. Why do people run back to the Republican lies when things go bad for a sitting Democrat? That’s the worse of the two bad options! Why do people believe the bs and forget the manipulation?
When people only have two options, the mind by nature wants to pretend they are different and opposite choices.  Also, propaganda really seems to work.  Truth be told, Republicans and Democrats these days differ little and serve the same corporate masters.  I do find it really strange that people go for the Republican concept of “get big government off of me” while never seeming to digest that Republicans are the ones trying to legislate Christian doctrine onto all of us and to blatantly remove all kinds of Constitutional protections of citizens.
That Tupac movie Gridlock about junkies also kind of makes me think of society in general…and definitely Congress! Gridlock, gridlock, gridlock. How can we get a flow of energy moving again in a sane manner that allows people to function and heal our bodies from all the modified foods and chemicals we’ve been told to eat, to find a normal rhythm again, etc?
I’m not sure if it’s possible.  Maybe we’re just a civilization in decline, you know?  According to a lot of science, we’ve got the planet pretty screwed up.  And again with the historic trajectories… once we left the hunter-gatherer lifestyle we became a species seemingly hellbent on its own destruction.  Which is weird because at the same time, humans are incredibly creative.  Maybe, just maybe some of us will figure out some next level shit where we can fix what we’ve broken or transcend our physical bodies.  Otherwise, we’ll be fossil fuels for whatever comes along after us.
[youtube]http://youtu.be/16b0wFwb2Qs[/youtube]
Do you feel that this release somewhat is closest to the Jucifer live sound? Doing the Nomadic Fortress release thing, is it easier to have total control or do you feel you’ve always released with other labels that “got” the band in some way? The 4 track recording of this stuff is so killer. I loved how on Stag the Melvins would have a 4 track song thrown in and it would still work. For you two, the energy translates so well. It is as mean as some fired up Germs demo or hearing a punk band playing through the cracks in the wall of some basement somewhere!
Thanks!  Yeah.  It’s really basic, y’know, just us playing.  So it’s very live and real.  And the songs’re all definitely the kind of songs we play live, whereas on a lot of our records we put in songs we loved in that context but would never wanna have in a setlist.
It’s definitely easier to have total control by doing stuff on our own.  We’ve always worked with cool labels that did at least mostly get us, but every time you take out a middleman with putting out a record you get a shorter path to achieving your own vision.  The main thing on this album is just to do it fast.  With other people’s labels you have to get into the queue. 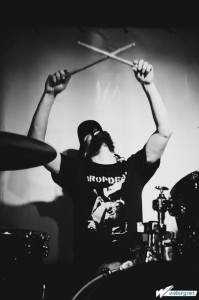 How did you know it was time to focus on the United States again for this record? Have you been watching Sonic Highways, The Foo fighters HBO show that focuses on different American cities’ musical history? It’s quite great and has Minor Threat and Bad Brains on the D.C. episode. Do you identify with D.C.’s complex past?
It was just a gut feeling and where we wanted to go right now.  I think part of it is that we spent almost half of last year on tour in Europe and Russia.  We’ve been so engaged with the histories of other places while also being physically removed from the U.S. that it made us find new interest in our own home country.  Edgar grew up around D.C.;  some of my ancestors were Natives of that region whom others of my ancestors usurped.  Those ties pulled us to it emotionally as a topic.  Also it’s the hub of American-ness.  Like nothing is more symbolic of our nation.  And for both of us growing up, the punk scene from there meant a lot to us.  Even if some of that was probably just hype, haha.
Haven’t seen that TV show, but yeah we definitely are moved by D.C.’s past.  There is so much idealism in the way it was founded, but it’s so fuckin stained with hubris and oppression.  It’s really pretty strange to have such sort of noble imagery about freedom and equality attached to ruthless imperialism.  This ability of humans to compartmentalize, lauding liberty while owning slaves type shit.  Seeking sovereignty for your own nation and denying it to nations that preexisted on land you conquered and stole.  I can’t imagine learning such history and not feeling strongly about it.
“Decapitating the Regime” is the standout track here with seriously gnarly performances from you both. It’s like grindcore meets black metal Flipper or something! Shit yeah! Why do crust punks just want to drink cheap beer and fall off trains? Can everyone get organized again? Am I just out of the loop now?
Thank you!  Haha, I don’t know.  Maybe the bane of total human interchange through technology is that there’s too much nuance.  Everybody can find their differences — there’s endless subcategorization.  Maybe that keeps us from organizing like we used to.  And maybe it makes us too overwhelmed to act.  Or maybe we just romanticize social movements and music scenes of the past because we weren’t there?  Maybe the ratio of activism to apathy has never changed?  People seem to have to learn the same lessons over and over again.  Generations don’t build on what went before.  It’s like we’re condemned to travel in a circle.  A Mobius strip.
How did it feel to do this record after the acoustic solo album “Devil’s Tower”? Is it hard to switch modes or is the variety of music always inside you? L’Autrichienne kind of showed the most sides of the band on one release, perhaps.
The variety is always there.  For us it’s just part of being alive, to have furious aggressive moments and quiet introspective ones and some in between.  I guess it’s weird among most bands to deviate as much as we do from one sound to another, especially since we don’t do the same deviations live, but it’s just who we are.  We feel and express the full spectrum.  It would be very hard to switch drastically during a show, but it’s easy to change focus between recordings.
За Волгой для нас земли нет was released on double vinyl by Alternative Tentacles,an album of your Russian experiences and a contemplation of the Battle of Stalingrad. Was JelloBiafra super syoked to put it out? He is, in many ways, still one of the freest and most important voices in America and the punk movement and Jucifer’s pairing over the years with Jello’s label makes total sense.
Jello is amazing. (And AT is putting out the vinyl of District of Dystopia too btw!)  It’s a huge honor for us to work with him.  Whenever we get to cross paths, we have fascinating conversations…afterward I always think about being fifteen and hoarding Dead Kennedys tapes, and just bug out on the fact that Jello Biafra is putting out records I made.  He’s absolutely still a great thinker and voice, and completely riveting onstage.  A formidable presence who’s also down to earth and real.
When constantly traveling, how do you retain sanity when faced with various influx of flu causing germs, required paperwork for border crossing, etc?

I believe living rough keeps immunity strong.  Try not to over worry about germs and all.  Paperwork, paying bills and stuff like that is a huge pain in the ass to maintain, but you have no choice.  Lack of sleep, hard work, cuts and bruises and some sorts of chronic pain and stress are just the norm.  For us it’s the difference between life and half-life.  When you take on life in full, it’s not gonna be smooth.  But trudging through the valleys you just gotta keep thinking of that next epic mountain view. 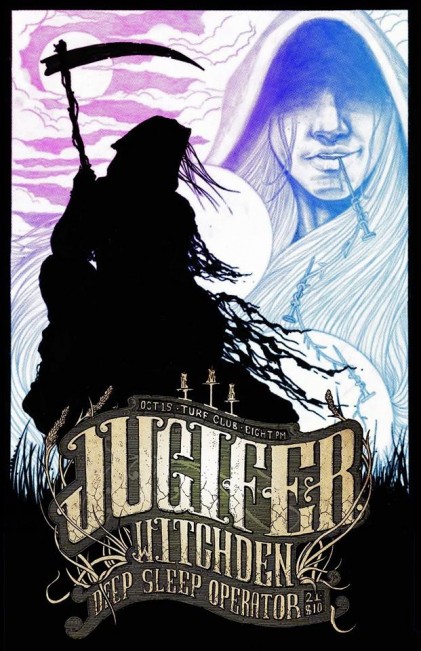