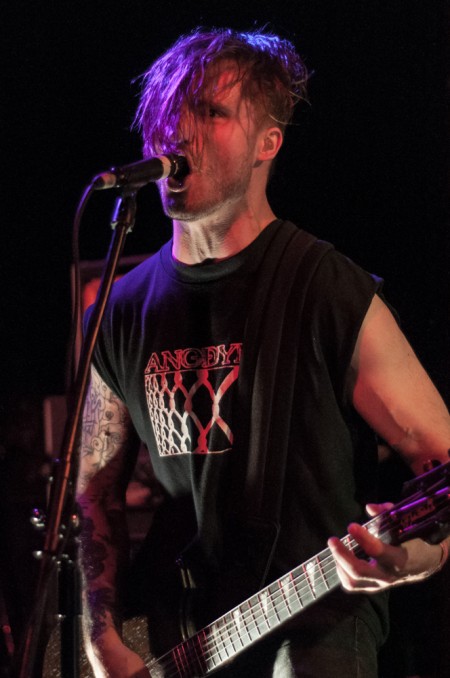 I recently spoke to KEN Mode vocalist Jesse Matthewson at their St. Vitus gig in Brooklyn opening for the venerated Orange Goblin. It was a crazy show and the noise rockers did not let the crowd down, slaughtering the room with unbridled fury. These talented Canadians can’t be kept down.  We discussed their new record ENTRENCH, other cool bands, touring with Torche, soundtracking a film and more. Check it out by clicking HERE!

Good morning. What are you up to today? What’s going on?

Jesse Matthewson: We are presently resting after being on the road for 7 + weeks, gearing up to hit it again in about a week and a half with Torche for another 6 weeks. No rest for the wicked!

How does it feel to hear that your latest record ENTRENCH is getting great reviews and seems to be really connecting with people? Season Of Mist seems like a great home for it. I love so many of their recent releases like Kylesa, A Life Once Lost, The Old Dead Tree (a few years ago).

We continue to just be stoked that anyone cares. We have a lot more ground to cover, so hopefully our album(s) continue to grow on people and we can continue connecting with people on a much more personal level in the live setting.

Season of Mist has been a great label to work with so far, and the label seems to only be getting stronger, specifically in the US, which is really great to see. They have a lot of really exciting records yet to come out in the next year.

Jesse, when I got to chat with you in Brooklyn I mentioned some bands I thought I could detect in your sound. Time In Malta, Taint, Today Is The Day and others came up, but you also are really doing your own thing. Could you talk a bit about influences in KEN mode? But also…you really are your “own” band at the same time.

Like we’d talked about, we’ve always drawn from a number of different areas, from noise rock, to hardcore, to the odd metal tidbit…I was excited when you even mentioned Time In Malta, as so few people remember that band, and they were one of the many great bands from our previous label, Escape Artist Records, who was once home to Isis, Anodyne, Keelhaul, KEN mode, the Dream is Dead, Under Pressure, Burn it Down, Collapsar, Blunderbuss, etc.

Anyway…bands that have always been at the core of our sound include the Melvins, Dazzling Killmen, Today is the Day, Drive Like Jehu, Kittens, the Jesus Lizard, Zeni Geva, Unsane, TAD, Black Flag, Bad Brains, etc. We can’t help but run this through a modern filter ala a lot of our contemporaries, which having been around for 13 ½ years, means we’ve had a fair number of those.

What can you tell our readers about UGLY, the new film you have provided source material for? The press release says it is an Aburag Kashyap film and involves a child kidnapping? Sounds rather intense.
In all honesty, I have about as much info as anyone who’s googled it or seen our press release. I texted Kurt the day before we were playing Boston to see if he wanted to get some lunch the next day, when I texted him he said he got asked to do a last minute project for this film and asked if we wanted to come down and play around in the studio with him. It was our first day off between tours, so we literally had nowhere that we had  to be, and what better way to spend a day off than to make noise in Godcity studios? We were given some instructions as to what they wanted, made some noise, and then in a rather suiting fashion, went for Indian food with Kurt and his lovely better half Ashley.

It was great seeing you guys in Brooklyn with ASG, Roadsaw and Orange Goblin at St. Vitus. I had been waiting to see you play for a few years and it did not disappoint. The crowd really seemed to get what you were all about. How did you feel about the show?
I love playing Brooklyn, as it’s always a good time, and specifically St. Vitus is becoming one of my favorite venues to play, period. We definitely play NYC more than any other city on the planet right now. We played it three times on just THAT tour!
This show in specific was fun, as we had an unruly crowd member who got a little too excited and started throwing monitors and mic stands while we were playing, so I had to deep kick him right in the chest. Dave from Revocation came up and did guest vocals in ‘Never Was’…it was a good time.

You guys are going to be touring with Torche coming up. That seems like a great pairing. They are a bit more melodic than you but both bands really command the stage and also have a personalized sound that can’t be swayed by trends, it seems. Thoughts on the tour?
We’ve been trying to tour with these guys for a few years, and I’m glad we could finally line it up! It all came together on a relative fluke actually, as originally we were supposed to be on tour in Europe, but the plans fell apart partway through our North American run with Today is the Day/Black Tusk/Fight Amp. Thankfully Torche was touring, hadn’t sorted out support yet, and we capitalized. I think this is going to be an intensely fun tour as I think our two bands offer up an interesting mix of styles within the aggressive music spectrum.

Yeah, a sick combo for sure. What is it about working with Kurt Ballou that appeals to so many bands? I mean, I guess you can just speak for yourselves. And obviously the guy gets amazing results and is also in Converge, haha.
Kurt’s a name that seems to do no wrong lately. He was awesome to work with in the studio, and it seems as though he has a very ‘cool’ sound in a few sub-scenes in this wild genre we all exist in. Everyone’s going after that mad Converge money!

You were just announced for participation in the Pitchfork Music Festival. Your band is really fuckin’ busy?! Are you psyched. You guys seem to really live for this and have worked hard.

Hugely stoked to be a part of Pitchfork fest. C’mon, we get to technically say we’re playing with Bjork and R. Kelly! How goddamn cool is that?! We’re going to tour as hard as we can for as long as it makes sense to do it. We just want to get to see parts of the world we otherwise might not be able to, and experience whatever is coming our way. Hopefully we can pay rent while doing so, haha

Lastly, any parts of the world you particularly enjoy playing? Cool people or places to give shout outs to?

We haven’t been to Europe nearly enough, and had three tours fall through on us in the past year over there…but more and more we’re making touring North America better for us. The US has been a real uphill battle, but people are coming around to us, and we have a ton of great friends all over the place. I’d love to get over to Australia, New Zealand and Asia at some point while touring for this record. That’d be pretty fun!