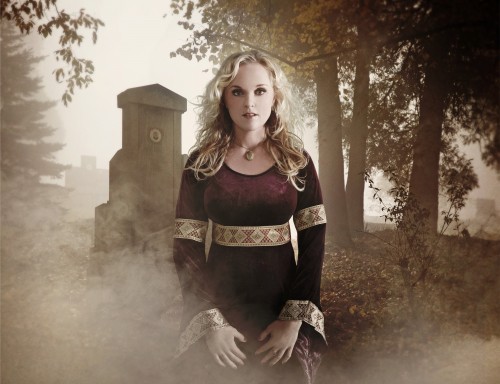 Liv Kristine and her heralded symphonic metal group Leaves’ Eyes have released their finest, most realized work yet with the band’s current (and fourth) record MEREDEAD.

A lush and vibrant album that surpasses the rest of the band’s previous (yet still compelling) output, MEREDEAD is rich with everything from Old-English and Norwegian passages to every instrument you can think of and many guest contributors including Maite Itoiz and John Kelly (Elfenthal), Carmen Elise Espenæs (Midnattsol), Anette Guldbrandsen, and Viktor Smolski’s Lingua Mortis Orchestra. Metal Riot spoke with Liv about crafting such an elaborate record full of living mythology, cathartic harmony and musical showmanship. MEREDEAD is a band game changer like Iced Earth’s THE CRUCIBLE OF MAN, an example of an already beloved group raising the bar and using every tool at their disposal to realize their transformative artistic vision.

Click HERE to read a discussion with Liv about the poetic, epic and romantic “deadly sea” of MEREDEAD.

MYE: Excited to discuss “Meredead” with you today! How are you doing today and
what are you up to?

LIV KRISTINE: Thank you, everybody is doing well, except my husband, suffering
through a tough flu at the moment. I just returned from a long run through
the forest. We actually just arrived from tour, and I am now looking
forward to further shows and tours. In April we toured with my sister
Carmen’s band Midnattsol, and then in May we joined Tarja. Wow! Both tours
were full of magic moments when “the ladies” get together! It was
fantastic to have my sweet and lovely sister next to me on stage, singing
in Norwegian dialect! My heart was pounding, I am so proud of Carmen!
Moreover, being Tarja’s duet partner lady at our final show in Hannover,
singing P. Gabriels song “Don’t Give Up” was absolutely unforgettable.
Tarja is such a sweetheart!

MYE: I love the variety of instruments on this record. “Spirits Masquerade”
is so epic and I’m sure works so well in the live setting. The middle and
ending sections are so beautiful; you can’t help but think of rolling
hills and a misty morning. How are you going to translate some of the odder
instruments into your touring show like the Nyckelharpa? What were your
thoughts when setting out writing “Meredead”? You’ve made the most elaborate
and complex yet accessible record for Leaves’ Eyes yet.

LK: Thank you for your compliment! Nyckelharpa is one instrument which
will not be translated into our live shows, unfortunately. I love that
instrument, however, it’s hard to find someone who can tour with us,
moreover, our night liner is full. Thorsten will play the mandolin.
However, bagpipes, classical orchestra and, as already pointed out,
Nyckleharpa cannot be played live, at least not for the next concert
dates. Alexander, Thorsten and myself are the song-writing and production
team. Most of the time, music comes first, then vocal lines and words and
then we work even more on the instruments. For the production of
“Meredead” it was highly important to us that each song had its own
“face”, individuality and perfect, crystal clear sound to strengthen the
emotional effect. We just let the music inspire us to add new and
interesting “spices” to our music, like pipes, Nyckelharpa (Swedish folk
instrument), the fiddle, cello, classical orchestra or the flute. That’s
what makes the album that diverse and exciting as you discover a different
story, different instrumental combinations, different ways of singing even
in various languages in each song.

MYE: The band produced the record in your home studio and it is amazing how
crisp and clear it sounds, yet still the best symphonic metal aspects
don’t feel too slick or like fake pop music. It is great! How difficult
was the process getting the results you wanted?

LK: We needed about 1.5 years for the complete production of “Meredead”,
which is only possible because we do have our own studio (Mastersound
Studio), as you already mentioned. The composing process went
overwhelmingly fast. It was one great pleasure writing and recording the
album together with Thorsten and Alex. However, the fact that we have
included a number of complex instruments, all played live by the way, in
most of the songs, made the mixing session quite interesting, I can tell
you! Alex, my husband, slept only half of the time in total compared to
Thorsten and myself during that period. At night the phone isn’t ringing,
moreover, thanks to Alex, we were able to finish the production in time,
as the delivery date was settled. Thanks to Alex, “Meredead” is said by
press, fans and friends to be the best production of Leaves’ Eyes so far.
I really think it is. I am so proud of my band members. It’s a real
pleasure performing the new songs live, by the way. 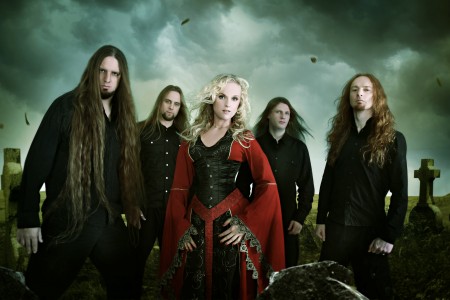 MYE: How does it feel when you feel anticipation building and suddenly you are playing for a lot of people and you know you have made a connection? It must be such a rush singing over such lofty power metal. Does your imagination run wild or are you very much caught up in the moment?

LK: I am caught up in the moment. Every performance is one process of
giving, and receiving. I call it an “exchange of positive energy” between the band and the audience. I really have to say that we do have fantastic
fans. I am looking so much forward to every gig, and to meet our fans
after the show!

MYE: How did the cover art come about for “Meredead”? It is a bit different and more fantasy based than your usual photo covers, a mysterious woman
rising from the ocean.

LK: We are very pleased with it, too! Many people already asked me why
I’m not on the album cover of “Meredead”. I think I look too “sweet” and
“angel-like” for the album. She represents both the beauty of the sea and
at the same time the dangerous ocean! I think the girl on the cover is
really beautiful, and I absolutely love the artwork of Stefan Heilemann! I
am going to ask Stefan if I can meet her some day, hehe. 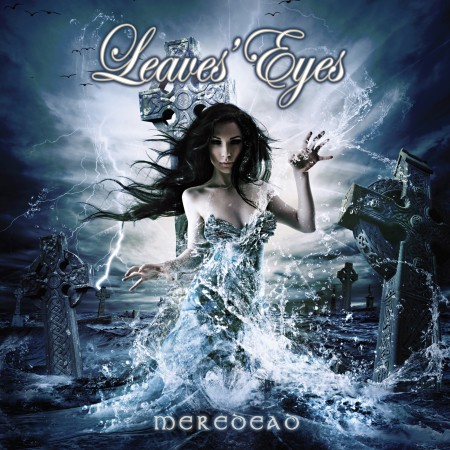 MYE: “Velvet Heart” is my favorite song on “Meredead”, just ripe with
beautiful harmony. It has a great, sweeping romantic feel and you can
still dance to it. Almost reminds me of the feelings I get when I hear
Moonspell’s “Opium”, though that song is much darker. Both get stuck in
your head and you want to dance but also are moody. I was wondering your
feelings while composing “Velvet Heart” and if you were particularly
pleased with how it came out.

LK: Wow, “Velvet Heart” is one of my favorites, too! Singing this song
makes me go back in time for a moment. Somehow it reminds me of the early
Theatre of Tragedy musical style. I like it a lot. It was Thorsten who
composed it.

MYE: Can you tell us about all the studying you did to add to the depth of
the Old English and other elements you planned to include on “Meredead” that
have made the end result so special?

LK: I just let the music itself inspire me. If I chose a theme from
Nordic mythology, I would include Norwegian lyrics. It was very intimate
to sing in my mother tongue Norwegian, as it makes the lyrics even more
emotional and personal. Singing in Old-English meant digging my nose in my
Old-English grammar books once again, however, I am very interested in
historical languages, which I also studied. I think that Old-English has a
very special “sound” phonetically. You’ll find Froeya, three-headed
trolls, vampires, ghosts, witches, Vikings traveling on sea, Viking
ladies mourning and of course many images from the Norwegian harsh weather
and wild nature landscapes. I guess there is some homesickness towards
Norway in my lyrics. Actually, it’s more than obvious that I miss my home
country. The title is my own word-creation: To my grammatical knowledge,
“Meredead” could mean ‘dead by the sea’, ‘or the deadly sea’. Poetically,
we could add some imagination and lyrical sound and say “Sea of Death”.
Secondly, the word “Meredead” sums up some of the themes rooted in my
lyrics on the album.

MYE: What was it about Mike Oldfield’s “To France” that made it seem like
the right choice/fit for Leaves’ Eyes to reinterpret it? Was it fun making
the music video? What appealed to you about the story told in the lyrics
of “To France”?

LK: “To France” that we covered, by Mike Oldfield and Maggie Railey, is
actually our promotion single. Moreover, we already shot a video for it in
Sweden 4 weeks ago in a Scottish castle with Revolver/Patric Ulläeus, my
favorite producer. It was my guitarist Sander’s idea to cover it. I
practiced “for fun” along to Maggie Railey when I was little, in front of
the mirror, with a hairbrush in my hand. Her voice has always fascinated
me. Playing this song live is an amazing experience by the way!

MYE: How was it singing on an album again with your sister Carmen? It must
be nice to be able to feel closer that way as siblings in a creative way.

LK: This week I will visit her in Norway! It was fantastic to have my
sweet and lovely sister next to me on stage, singing in Norwegian dialect
on “Kraakevisa” and the epic piece “Sigrlinn”! My heart was pounding, I am
so proud of Carmen! She is such a sweet-heart! You bet we are helping each
other out, ALWAYS! My sister is the only one with whom I can make really
silly jokes in Norwegian (except from my son, who speaks Norwegian, too).
We had wanted to do a duet since our debut “Lovelorn”.

MYE: Who are some artists you have yet to tour with that you’d like to
perform with? Even though you are more symphonic I would love to see you
play with Iron Maiden or Battlelore (though I am not sure if you have
already!).

MYE: How does it feel to know that after all your hard work over the years
more and more people love the band and are noticing? You are now
considered one of the leaders of your genre of metal!

LK: I am really, really happy that both my dreams in life have come true:
being a musician, and becoming a mother. Thank you so much for the great
times we shared on our North-American tours, I hope there will be many
more to come! Thank you for always being there for me and my band.

MYE: THANKS SO MUCH!

LK: The pleasure is mine! 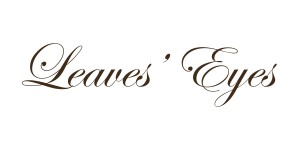