Interview: Mindrot (you read that right) – A Soul’s Endeavor with Adrian Leroux 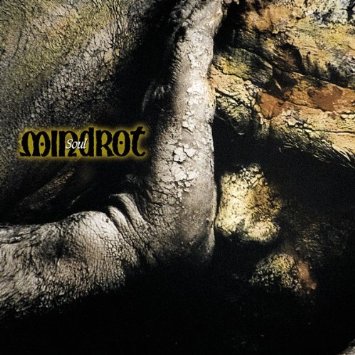 I was reflecting in an email I sent today to a pr friend Nikki Law from Century Media who handles Karyn Crisis’ Gospel Of The Witches about a cool time I went to L.A. when Crisis was on the West Coast in the band’s later days. I got to see them rehearse in a space they shared with a killer band called Eyes Of Fire, which featured Matt Fisher as the driving force. Recalling that , it made me think on how more people need to give love to the band Mindrot, a musical volcano which Fisher was also in prior to Eyes Of Fire. People give post-humous love to Type O Negative and, to some degree, the very underatted Woods of Ypres, but Mindrot deserve way more accolades than Mindrot gets. Fans of Neurosis, Twitching Tongues or Katatonia should all be rallying for a Mindrot reunion.

Still to this day no one really sounds like Mindrot.

Adrian Leroux, who along with Matt Fisher founded the band in 1989, was super cool to answer my questions and look back on Mindrot’s active and punishing years of creative gloom and glory. Read it BELOW.

Do you think people are surprised when they do their history and find out one of the best “doom” bands (which I think is way too limiting a description for your sound) was from Orange County?

Funny you say that – we never really classified ourselves as a Doom band but I realize we kind of fell into that category. The only surprise for me to this day are the very few bands that did this kind of music back than and even today. We had a great mixture of different styles coming out of Orange County at the time, but it feels like it’s still as limited even today. To sum it up we did what we did and we either blew your mind or we put you to sleep at shows. We were all about grind when grind actually meant slow and heavy…now a days that would be considered playing extremely fast as you know. Funny how things change. Lastly I don’t live in OC anymore so I really don’t follow what happens there. However there are a lot of great bands coming out of Southern Ca. like Destroy Judas, Gravehill, and even some classics like Phobia, and even Apocalypse coming back into play with a newer line up.

Do you remember really feeling onto something when you wrote “Suffer Alone”, or were you too busy being “in the music”? That song still really doesn’t sound like ANY other band to me. Mindrot had gloom, groove and gritty darkness. It felt almost hopeless at times but the music empowers the listener in certain ways.

Well I’m sure Matt who wrote some lyrics may have something to say about that since he wrote that one. Musically speaking it was a shorter one for us but it mixed a lot of different elements as you stated. That is what we always stood for musically. We didn’t want to be labeled etc. I think that we all experience things in life that make you feel hopeless, and we capitalized on that. We were all pretty grounded souls who felt that we can connect to others through music – hopeless or not we took the ride and we picked up many along the way. 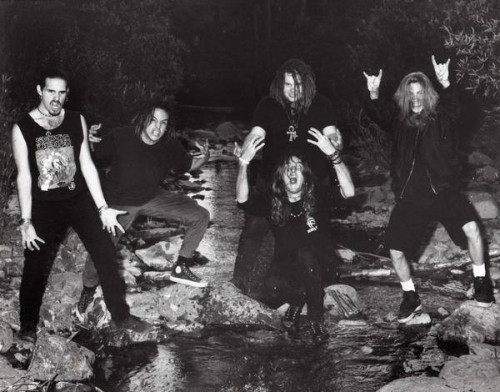 Do you get a lot of reunion offers? I feel like Psycho California Fest should be all over you guys, man.

Well I can’t say we get offered to do reunion shows at all…actually we don’t. As friends in the band we still all keep in contact…well most of us. I haven’t spoke to Matt Fisher in a long time, and I believe there is some animosity between him and Dan after Eyes of Fire. However speaking to the rest of the guys we have discussed pulling off some reunion shows but that’s it – no recordings, tours etc. However sadly we still can’t figure out some key details, and I told the guys when your ready let me know. I’m in.

That’s fucking awesome. I’d totally give you guys a million bux if I had it lying around. How much were you influenced by Industrial music? Your band, Neurosis’ Through Silver In Blood as well…both seemed to have cool ambient textures of samples at times (“Dawning/Anguish”) that could enhance the mood of oppressiveness or vastness. Their “Become The Ocean” or some of your spacious outros or vibey parts remind me almost of a weird kinship with Skinny Puppy or Ministry or Front Line Assembly, but amidst a much more metal context. Like, I hear much more kinship between your band and Godflesh or death and doom metal.But also gorgeous synths that goth kids could appreciate.
Ok, this is a loaded one – so I will keep it short and sweet. We all come from a load of different backgrounds on music. I can honestly say that we all listen to a huge mixture of goods. The bands that you mention all have touched our lives in some way shape or form. So we incorporate all that and put it into a blender and the result was: Mindrot.

Did you ever have resistance that your album art was too “smart”? Like maybe you should have more brutal looking cover art with a name like Mindrot? I loved the cover images because it created a feeling and sense of general energy that makes the participant/listener think.

We never got resistance on the covers. We had questions on what they were etc. I think you said it best – it really did create a feeling of the storm or beauty that lie ahead. We wanted it to be real not drawn up and classified into a genre of music that was prevalent for that time. However to clarify not all covers were bad…every band has a vision ours was unique I suppose.

Do you feel like you guys maybe came out too early or does it not factor? Someone has to lay the groundwork, right? I mean, now awareness for extreme metal is at an all time high and social media makes it easier for bands to connect to fans in some ways.
I think we were right where we needed to be. We contributed a little to the foundation of extreme metal that exists today. (A small amount) I listen to Liquid Metal on Sirius XM and it’s really hard for me to listen/get into a lot of what comes out now. Some bands are good, but It’s just not the same for me anymore. I’d prefer to listen to the classic metal, goth, or punk instead. However there is a lot of great talent out there…it’s just how it’s executed. As far as getting the exposure back in the day – well it was extremely difficult. Now with social media today you can promote the hell out of your band from home. How convenient!

What were some of the biggest obstacles you overcame? The music feels so thought out but also organic, one of the things that I feel makes Mindrot one of the most underrated bands in metal.

At the time coming from a big punk background was the fusion of metal into punk or vice versa. Growing up for me I was a big metal head in grade school so it was easy for me to incorporate it, but we got a lot of resistance saying we were selling out and just not punk enough. Also how you dressed represented your status in music. (It still does, that’s why know one can tell what I listen to now a days). We just didn’t all look the part and for that we had some obstacles. Again we did what we wanted and could care less on what anyone had to say.

Would it really have been too hard to replace your drummer when he played in Save Ferris? Is that really what derailed the band? Not to be a nuisance by asking. I mean, you certainly had already made a lot of great music.

At that particular time we could of pursued another drummer however they weren’t growing on trees, it seemed. If it had happened today I would say it would of been a piece of cake with social media etc. Did It derail the band? In a lot of ways it did. Evan was and still is an amazing drummer – to us he was not replaceable. The long short of it is Mindrot always had issues with everything from recording to touring to finding a label etc. it went on and on. We never caught a break for anything. The band life was an endless black hole of money that we didn’t have and it took a toll. (all of us in bands can relate – it comes with the territory) I also feel that after we completed Soul we weren’t all on the same page musically speaking anymore. Some of us were going in a direction that we all couldn’t agree on and it finally stopped when Evan left the band. (Now it wasn’t a debate that we all argued about extensively it was more of a sense that lingered at rehearsals etc.) Some of us including me felt the ride was over and we just couldn’t continue doing what we were doing. To this day I can’t say I have regrets but if I had one it was that we never toured and I feel we let a lot of true fans down. But you never know. I say that loosely as we all live pretty extensive lives and are very busy. Hell I’m 45 now and my primary focus is my family with my wife and two kiddos. I still miss doing music extensively…however I’m doing an interesting side project right now with another in the near future possibly so keep your ear to the ground. Dan is in Destroy Judas check them out!!! Amazingly epic 3 hour songs! Well not that long but you get the idea. Heavy shit! John is in the newly reformed Apocalypse with reunion shows planned and a new material on the horizon and Evan…well he’s in a lot of bands – he’s a machine. He’s also an amazing drum teacher/instructor if you live in OC get in touch with him for private lessons. Again Thank you Morgan for your continued support and for all our true fans as well…Cheers! Adrian Leroux 2015
\m/