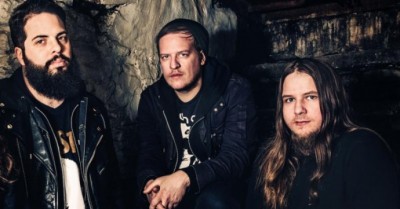 Missing is a new “super group” of sorts of underground metal stalwarts who would probably hate that term. It’s not like they will be headlining Live Aid 9 anytime soon, but the guys in the group have a serious pedigree of bands between them (Batillus, Abigail Williams, Lord Mantis, Nachtmystium, Corrections House, etc.). In the aftermath of the Lord Mantis upheaval, I got an invite from my friend Jeff Wilson of black metal standouts Wolvhammer to check out this new band Missing he started with Charlie Fell and Ken Sorceron to basically pick up and evolve where Lord Mantis’ Death Mask left off. But there is more…JefWhitehead , Fade Kainer AND Sanford Parker are on board as well? Holy crow, metal fans.

Check out the birth of the project BELOW (and thanks Jeff). 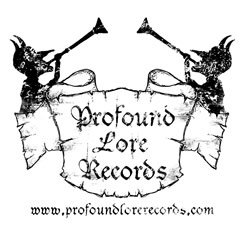 How did Lord Mantis sort of get restructured and lead to the birth of this new band? How does it feel to have a team of such creative people in your corner?

JW:  I can’t talk too much about the Mantis scenario, as I’ve only been a third party to a lot of that, but there were conversations going on for awhile about what was going to happen with the lineup, the name, etc. We finally just decided that it was best to drop all of the baggage and start fresh. The group was mostly conceptualized by Charlie, Ken and myself. I’ve worked with them in Abigail for over a year now, we did a record and over 100 shows just last year. Charlie and I were also in Nachtmystium together, so we all know each other well on a personal and creative level, so it’s great to have this group of dudes collaborating on something totally new.

Can you talk about how you got the other guys involved? Isn’t Sanford like way too busy recording bands? And really cool about Fade. I’ve seen him with Batillus and Jarboe and he has an imposing presence on stage. Always used to see that dude around the NYC scene at industrial shows and I interviewed him once for a French magazine, though we have not spoken ever face to face.

We’ve obviously all done records with Sanford at some point and we’ve all known Jef and Fade for quite some time as well. As far as getting them involved, it was basically the same process as we usually have when creating bands… Who are we going to get along with and who’s talents can be used where. Sanford was a big part of the Death Mask sound and having Fade along for the ride is only going to take that industrial element and project it ten fold. Jef and I did a Nacht record 5 or so years ago (Addicts) and I’m pretty excited to do something with him behind the kit again. It’s not really a coincidence that we all tend to work together a lot. 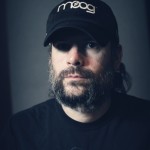 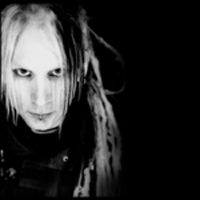 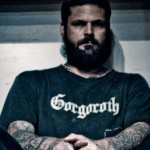 What is the expected direction of this project? I have been listening a lot to Desideratum, the newest Anaal Nathrak release which has industrial and black metal combined. And also been listening to “The Desancification” by Wolvhammer today. Can we expect some of your more dissonant and mid tempo type playing from you on this?

A lot of it is going to continue where Death Mask left off. That isn’t to say that there won’t be other things in there as well. I’d think that everyone already has a pretty good idea of what it’s going to sound like, if you’re familiar with our other bands. We’re gonna try to mix it up a little though. We all do like The Cure a lot, just sayin’.

What are the current plans for recording and releasing an album? Is it true it might be on Profound Lore? Obviously I love their Sub Rosa, Atlas Moth and many other releases which I plug a lot on this site. Seems like a good home for the people in your new band.

Right now, we’re planning to record a couple songs and maybe a cover during the summer, which will come out before the year is over. Just enough to give everyone a little teaser until we have time to really focus on a full length, which as of now, we want to have out next year. Profound Lore has been a home for a few of us for the last few records we’ve done, there’s no reason for us to not continue that relationship as long as Chris will have us.

Is this going to be a “main” project or something you all kind of do, like Corrections House for example, when you have the time from other bands. Anything new happening for Abigail Williams?

All of that kind of depends on our schedules. Myself, Fade and Sanford have been doing a lot of touring with our other bands and Ken should be finished mixing the Abigail record in the next month or so, so we’ll start our tour cycle for that soon. We’re definitely not interested in making this band a one off, and we’ve already talked about the configurations of it when it comes to playing live, which we’re planning on at some point. Time will tell… You’ve gotta be doing a handful of things in this industry to get by these days, this is just another piece in everyone’s puzzle.

I feel like the more stringent strains of Black Metal or “pure” noise music (how can noise be pure? haha), while still respected…the boundaries are eroding more. Do you think this is a good thing and inevitable as the interwebs makes us all neighbors and harder to hide under a “rock”? I feel like social media makes everything more post-modern and a mutating collage. Sometimes it’s good and sometimes bad. I did hear a great mashup of Enter Sandman and Hall & Oates the other day, hahaha.

To be honest, I really don’t have anything positive to say about social media. I’ve got a Facebook account, because I’m required to have one to run my bands’ pages, that’s it. Not saying that it isn’t good for “business,” but on a personal level, I think I can speak for everyone else in the project, we’d rather be under the fucking rock.

What’s up with Wolvhammer of late? It is great to see that project’s profile rising. I feel like people are really starting to see how busy you are and talented.

The response to the record was generally positive, although I feel like it was passed over by the majority for a lot of other garbage that was more “hyped.” Gimmicks and TMZ style journalism will get you a lot further than “talent”(your words) these days, you know. I’m much more interested in putting in work and doing it the old fashioned way, writing good songs and touring. That being said, we’ve been out for 3 of the last 4 months and we just got off of a month long run with 1349 and Origin, which was great. We’ve got 3 or 4 miscellaneous releases planned for the year and a tour with another known Norwegian band planned for June, all of which should be announced in the coming weeks. Trying to make it across the pond before 2016 as well.

What is the shittiest shit hole venue or show you ever played, haha. Thanks, man!

I’m not going to name venues, because I’m definitely going to get stuck playing there again. I’ll just say that there’s a tie for dumps in Albany and Trenton… Cheers.