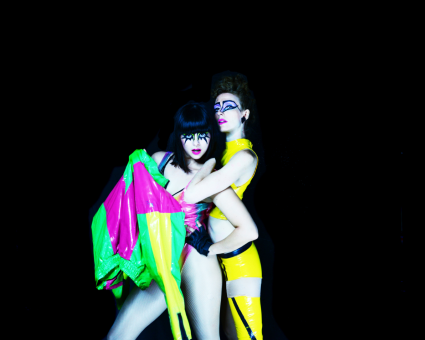 Mother Feather shorthand themselves as ‘pop cock rock’ but that is a far too
insufficient capsule to contain their glam infused explosive energy within.
The Brooklyn based band are theatrical, melodic and hard hitting with an edge
not often seen these days, brimming with enough possessed pizazz to get them
inked to Metal Blade despite being a far cry from the rest of the current
roster like Abornamilty, Sourvein and Criminal.

Listening to their forthcoming full length (order HERE right nowwwww!!!) , arguably the most rock n roll
record that streets in May, you can’t help but feel like the East Coast is
finding a pulse again. It’s been awhile, maybe since The Star Spangles caught
my ear, that I have heard a band who can embody gutter garage meets arena
worthy punch within the same skin so well. Anybody sick of the pretensions of
all the micro blogged sub genres out there today who just wants to get fuckin’
rocked and maybe vanish for awhile in a golden cloud of sweaty club rock with
attitude should eat this shit up fast.

Restaurant personality Chris Santos was impressed with the band and was tweeting about them, bringing them eventually to the attention of Metal Blade owner and rock and metal tastemaker Brian Slagel.

“He kind of pointed Brian in our direction and Brian checked it out and was excited,” says vocalist Ann Courtney. “Our Twitter feed was blowing up with metal guys. We are definitely on one end of the spectrum of the label, which is cool. I think a lot of metal heads think Brian is being subversive or something, but really I think it is just that he is a sincere music fan! He’s said we remind him of the 70’s stuff like KISS and Thin Lizzy that he grew up with.”

It’s pathetic we live in a time where we have to have a show like Vinyl
(admittedly a good program, no slight against it) to remind assholes that rock
n roll even exists. Mother Feather are the real thing, though. Ann Courtney,
Elizabeth Carena, Matt Basile, Chris Foley and Gunnar Olsen are hopefully as
commited as they sound to the cause, but let’s enjoy it while it lasts and
while we have them because this is lightning in a fuckin’ bottle, after all. 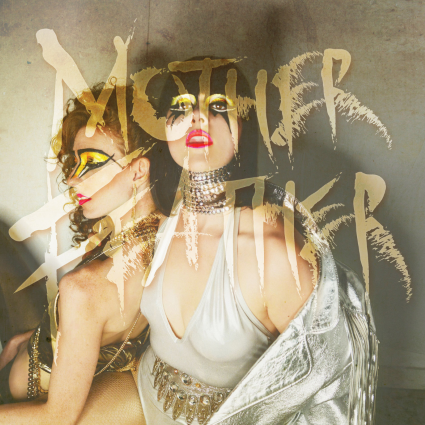 .Hey. Glad we could do this. How’s everything going?

AC: Where are you?

.Upstate, NY by Woodstock. You?

.It’s gross and rainy here today. I’ve gotta come down on a train and see you
live sometime.

AC: Come on the 13th if you can. We’re playing Knitting Factory.

.I always forget there is the Brooklyn one only now.

AC: Yeah, that’s actually the only one now.

.It still fucks with my head. Sorry to sound spaced out. I was thinking about
fashion in the early UK punk scene and how a lot of the girls like Siouxsie
Sioux and her friends would dress up and kind of define their own animalistic
look, y’know?

…well, peacocking and being creative. It was a little more organic than an
agenda. But then I was reading on Siouxsie’s Wikipedia page that her dad
milked venom from snakes as a career and her mom was a secretary.

AC: Get the fuck out! That’s amazing.

.Yeah, that fucked with my head! I am like imagining her early family life as
weird. But the fashion thing…at some point it seemed like it became suspect
if a band had flair. Like if bands had a glammy or fashion aspect. Or even
Bowie was criticized and for being “too chameleon-like”, which is idiotic. It
seems people are relaxing and letting themselves be wowed by theatrical stuff
again, as long as it still feels real on some gut level. Your band evokes
that, for me.

AC: Interesting. I feel like, for us…the fashion and costuming is about
matching the themes. Also, when I see a show I want to be wowed by the
spectacle. The ceremony of it. In a lot of ways the costuming is quite
ceremonial. You can’t get up on stage and sing about changing yuor life and
being reborn in your PJs.

. I mean, you could…but everyone might laugh at you.

AC: Yeah, so I want all the elements of the show to express that. To step into
something bigger than my everyday self. My kicks and my jeans. Plus, speaking
of kicks…you can’t do the best high kicks in your jeans. (laughing) Unless
they are especially stretchy.

.Yeah, it rips the crotches out. I have had this problem.

.I was watching some footage of you live on Youtube and it had that sort of
unified theatrical confidence and ceremony. Totally. Like non forced
choreography. It seemed like you were all super into it and was intriguing.

AC: Yeah, I’ve been dancing around…I mean, this is my true nature. I’ve been
jumping around on stage since I came out of the womb. It’s very essential to
me and gets back to my essential nature.

.There are some essential rock qualities and beefy kind of riffs in there but
also they are kind of these short, melodic danceable way. Strong soulful
choruses. It’s good to see people who can pull from that place with
confidence.

AC: Thank you. Songs are the core of this band. Also hooks. When I first was
sort of hit over the head with this epiphany of Mother Feather and imagined
and dreamed up what I wanted to make with this band, hooks were at the
foundation. I wanted to rock but wanted catchy music. I love pop music and
even thought this is a rock n roll band, there is a pop ethos at work. There
is nothing better to me than a song you want to repeat over and over for the
next six months. I’m glad that is coming across.

.It’s great to have something to sing along too. Are you excited to be on
Warped Tour this year? That’s crazy. You’re gonna be the best band there.

AC: We’re over the moon! It’s super exciting. We have never been on a tour of
this length and scope. We’ve been preparing and getting organized for months.
We’re full steam ahead. Mostly just really excited to be together for seven
weeks and playing for kids. By kids I mean teenagers, mostly. We’ve played 21+
clubs in NYC for most part. When we have played 18+ shows at Knitting Factory,
mostly, it’s been incredible to see a younger demographic coming out. Being a
teenager is the best time to discover music. When it hits the most and
hardest.

.You will stand out and I bet make a big impression.

.Yeah, my friend Meghann Wright did the acoustic stage last year or the year before and she seemed to have a great time. I hope your band does as well. So, tell me…How’d you know it was the right time to present all these songs to the world with a full length? I saw you have had some of the songs longer than others.

AC: Some of the songs go back to the start of the band, the Pop Cock Rock revelation. Well, “Mother Feather” is an example. I wrote that catharsis as a thesis statement, that song and the record are the summation of a lot of hard work. It’s really exciting.

.It’s wild that song was the seed as it is one of the best ones!

AC: Yeah, and “Beach House” actually came before “Mother Feather” but it was before I was conscious of Mother Feather, if that makes sense. It didn’t really have a place to go and then I wrote “Mother Feather” the song and I was like, “Oh, this is what I was singing about.” (laughing) It’s kind of like the precurssor. It touches on the angst of searching for the right motivation. An outlet in which to speak.

Wherever they go from here, this is a band who are sure to make some cool waves. 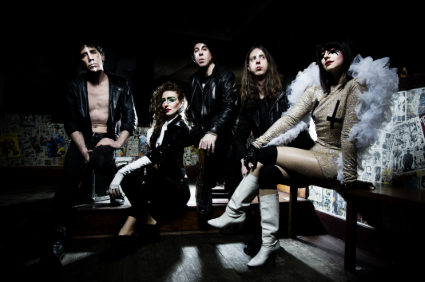