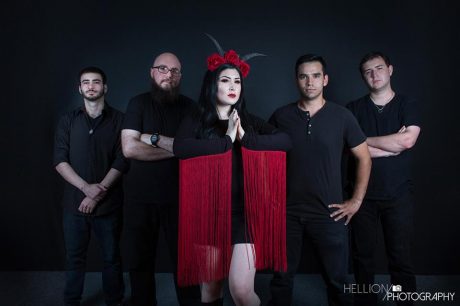 “New Yorkers are a notoriously resilient bunch, so it’s no surprise that the metal scene remains strong as ever, even thriving under the pressure of a changing city. I can’t give enough credit to venues like Saint Vitus and Lucky 13 Saloon, which give developing artists an avenue to grow and show this city what they’re made of.” – Sonia

Imagine if the occult side of Sabbath and the meatier side of Iommi riffs met up with Lacuna Coil harmonies and modern heavier metal production flourish. Check out Brooklyn, NY’s Mother Harlot’s recent self-titled EP. Hear what I am sayin’? The band have bite and style as well as a tendency to converse with several sub genres at once in a cool way.

Vocalist Sonia Goldberg stops by to fill us in on the band’s latest happenings and other matters.

How long have you been a band? I feel like I first became aware of you within the last year.

Sonia: Tom and I started writing for Mother Harlot back the Autumn of 2015, culminating in the release of our self-titled EP in September 2016, so 2 going on 3 years. We both went to a small music college together and had worked in tandem on other, more casual projects during our time in school.  Still, after graduation we were both looking to start something a bit more solid. Initially our goal was to go along a more Black Sabbath, doom metal route (both “Lilith’s Scorn” and “Mother Kali” were first written in lower tunings), but as the writing process progressed, we realized the songs themselves, as well as my vocal register, called for something higher.

So, you have an EP that rocks and a presence established as an active project. What’s coming up next?

Sonia: I’m happy to say, we just finished writing our first full-length album and have begun the recording process. We’ve got 12 entirely new songs (no repeats from the EP) with a bit of a darker feel overall than our first release. Nevertheless, expect massive riffs, harmonies, and a hefty dose of straight-up heavy metal. We’re keeping our fingers crossed for a release date close to the end of 2018, so keep an eye out! 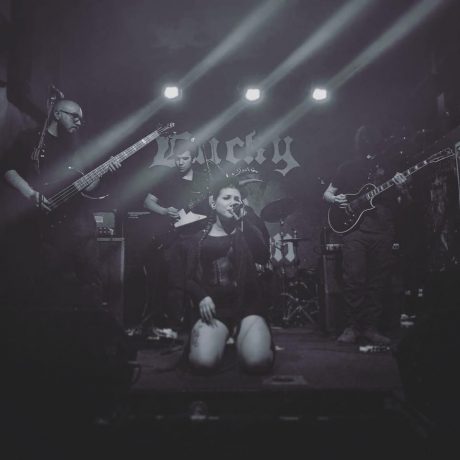 How does it feel to represent Brooklyn as a hard rocking metal band? There are a lot of band’s in the NYC scene from King’s Destroy to Gnaw to Mother Feather…really most of the bands are pretty good or downright great right now. It is inspiring to see metal stubbornly survive whatever sea changes are happening in the city? The F Bomb tribute shows in Manhattan. Lots of cool stuff going on. What do you love best?

Sonia: The irony is that Tom and I actually live in New Jersey now, despite the formation of the band actually occurring in Brooklyn. Nevertheless it’s certainly an honor. New Yorkers are a notoriously resilient bunch, so it’s no surprise that the metal scene remains strong as ever, even thriving under the pressure of a changing city. I can’t give enough credit to venues like Saint Vitus and Lucky 13 Saloon, which give developing artists an avenue to grow and show this city what they’re made of.

In terms of what I love best though I’d say just the consistency of activity. Shows are constant (great and diverse ones at that), so there is very rarely a large gap from one to another. It eats my free time entirely, but I’m, at the very least, partially grateful for that.

Did you sort of have the concept of the band in mind ahead of time or did the music written sort of dictate where each song went? Like you knew what topics were going to be song themes? Or do you feel like the floor is wide open for any subject?

Sonia: Conceptually, yes I definitely had an idea of where I wanted to go with the lyrics.  Despite the fact that we play pretty straightforward heavy metal, my personal allegiances in terms of taste generally lie in black metal. That said, I knew I wanted to, and probably couldn’t help bringing some of the darkness into my own writing.

I decided to center the EP around female death deities, in place of a traditional Satanic figurehead, such as Kali, the Morrighan, Lilith, and so forth. In the upcoming album, I decided to blur the lines a bit focusing less on literal mythology (although some songs, such as one entitled “Medusa”, are certainly more direct) and more on the idea of one centralized figure embodying the powers and struggles of each of these matriarchs as well as others. 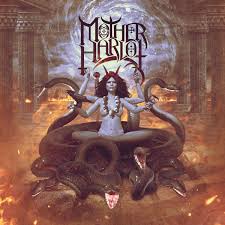 I am writing this on Valentine’s Day. Wanted to ask you what the Mother Harlot name means to you in so far as female agency. I always felt like the Whore of Babylon name for instance was really easy to abuse by sexist puritan types to portray feminine sexuality and women’s bodies as property to be in dominion to a controlling cis husband. Like, people are afraid of confident women or sex positive feminism and can be quick to brand them with names or look down on them. But already women have equality issues in society so they should just be themselves and do what they want with their lives and not conform to someone else’s antiquated power trip on what is acceptable from a woman in society. Like, I don’t even know if the Mother Harlot in your name was related to a character or idea. Just thinking about love today and how it means so much to different people. Even personal joy can be a form of it.

Sonia: So glad you picked up on that! Aside from matching well with the lyrical themes mentioned in my last answer, the name Mother Harlot to me illustrates a very real dichotomy that most modern women experience; the stigma of needing to be both puritanical as well as sexualized in order to fit societies ideals. My writing in general is about re-claiming these archetypes and finding power and a deeper truth in them.  I try very hard to use my songs to illustrate demonized female characters, such as the Mother Harlot herself, in a more human, well-rounded way.  Their anger and aggression is understandable, even justified, in my opinion. “Medusa” again stands out in my mind as an example. Some texts of the legend state that this was a priestess who was raped by Poseidon and on top of it cursed by Athena to turn any man who looked at her to stone, as punishment for breaking her vows of celibacy… and yet legend largely portrays her as a villain. I don’t think it’s a stretch to see how this relates to the plight of many women, even in 2018.

What has been your favorite show so far? I would love to see you at Lucky 13 sometime. I played there once with my Waking Bombs project opening for Worshipper and it ruled. They serve up the whiskey well also if you need to beat the winter cold!

– It was our first show, so it feels odd to say this, but, for me probably playing with Nervosa. The air of sisterhood at that show was tangible, plus they just kick some serious ass.

Yeah, they are great. Wow, I bet it rocked.

Lucky 13 is definitely one of my favorite venues in the city though. The first time we played there Tom’s off-the-boat Italian grandmother was dragged to the show by his mom, since she’d never seen us before. Needless to say she was… shocked by the go-go dancers (not to mention my stage get up and Tom’s growls). It’ll go down as one of my favorite show memories.

What are you inspired by as we head into 2018 further?

Sonia: That’s a tough one, mostly cause it’s rarely ever one thing in particular for me when I’m writing. It could be a line in a book, or a vague feeling of a song, or a scene in a movie. I’ve been doing a lot of reading around this record, and occasionally a reference to whatever book I’m obsessing about will pop into my lyrics. If you’ve read ‘House Of Leaves’ there are quite a few mentions in the upcoming album.