Interview: Nhor – Between the Starlight 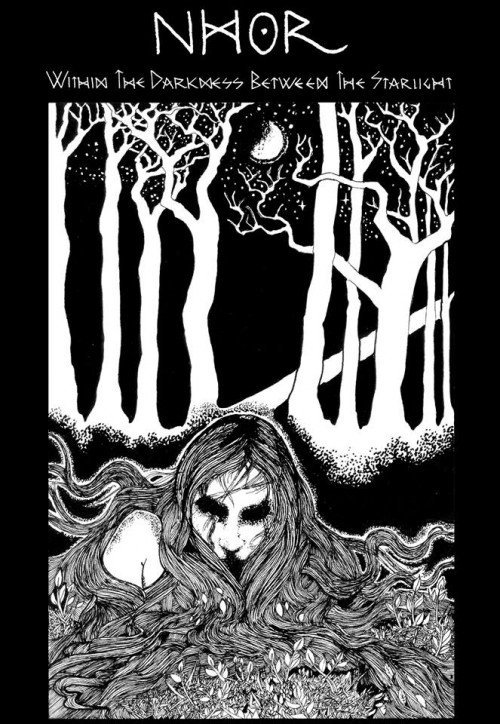 “If you read in an old fairy tale that someone; a witch perhaps, was able to communicate with whoever they wished, no matter where on the Earth, would that not be considered a great deal of sorcery? Because science has found a way to imbed many of it’s discoveries seamlessly within our lives they become overlooked. Yet we still look for magic in the world when it’s beneath our noses.”- Nhor

Nhor from the UK is the essence of what I love about challenging metal, an artistic reprieve from the mundane and an evocative yearning for pure reflection. Art that will ripple through your psyche like a stone thrown into a pool creates waves to topple vanity. Not since Agalloch’s Ashes Against The Grain have I been so moved by a recent work of black metal. Layers are stripped raw, mercilessly, but it is a blessing.

Nhor creates stunning work in various mediums, whether gorgeous merchandise, nature photography or metal that features lush piano for the truly somber soul as well as potent black metal and ambient inertia. I admire the kind of post-modern, do as you please Lansing Dreiden-esque unity of aesthetic between all of Nhor’s endeavors. It was a thrill to pick the brain of the mastermind behind the life enrichening (seriously!) new release Within The Darkness Between The Starlight. I am very thankful. 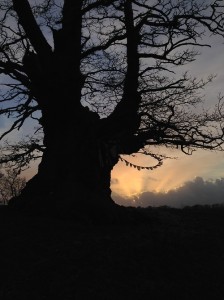 Ok, let’s start. I’ve been reading Shakespeare’s Troilus and Cressida , thinking about disillusion, whether in love or between social groups or castes. Especially contemplating  the following passage:

…As true as thou tell’st me, when i say i love her ;
But saying thus , instead of oil and balm,
Thou lay’st in every gash that love hath given me
The knife that made it

Nhor’s art (whatever medium) is so engrossing and powerful/wonderful…a welcome retreat or sound to embrace during some tough personal times on a cold Upstate NY day . Frozen lake outside window and snow falling. What you have done reminds me of how A Forest of Stars (great band) tried to draw on nature on some releases but you have taken it much further. The stuff is just flooring/powerful and resets the mind to a place where you can remember how vast the universe is compared to our smaller/yet still vast lives. It makes me feel kinship with the sobering quality of nature to cut through our pretenses, which can be liberating or, to some, terrifying. Basically, your music reminds me of the sobering quality of nature to make our human lives, concerns and everyday disillusions seem trivial in comparison. Was it intentional to make something that sounds really vast? It’s not easy to reflect the power of nature in art well, because it is so much bigger than our efforts, though we can strive.

There was never any intention. In my artbook “Towards A Light That Dwells Within The Trees” I explain in detail how this project began. I will try to make some sense of it here without spoiling the story from the book. In the very beginning, the project was something that had been looming over me for some time. It wasn’t until this night that I understood the burden I had been feeling. Think of it more as I felt the weight of the stars on my back andas if the forest itself had taken root in my bones. The first song I wrote, which at the time was for nothing other than myself was created on this night. I had found myself at an old piano in the cabin that overlooks the forest to the East of my house. I had been outside watching the stars and now I feel as if they somehow followed me to the piano. From there I found two chords. I played them over and over again until they seemed to fill the room.

There was an aching sadness to the chords, I couldn’t bring myself to stop playing the repetition.
This project is one of discovery and creation. I think one thing I appreciate and look for in music above all else is honesty. I have tried to keep my music as honest as possible. My latest album Within The Darkness Between The Starlight  is the culmination of all I have discovered about myself and that which inspired me since that first night at the piano. As I have said before; I owe everything I have created to the universe. I owe it to the stars and the planets, to the Moon and the Earth, to the wind and the rain. To the forest and its creatures, everything I have is borrowed from them. My music is only a poor interpretation of their song and my imagination is but a diluted replica of mother natures.

What is it that draws you to nature photography?

It was quite unintentional and I would by no means describe myself as a photographer. For me the photographs I take and choose to display are a kind of bridge. They are another way for people to connect with my project. For those who unfortunately do not live near such places it is a window for them, and for those that do; I hope it pushes them to explore such places for themselves. Re-connecting myself with nature has been, and still is one of thebest things I have done. I hope others can share this experience.

Do you believe in Animism? Are you familiar with the foxes in the woods in Kurasawa’s Dreams? The Kitsune fox wedding? It’s fantastic.

I’m only familiar with Animism which I unfortunately see no reason to believe in. As far as I’m aware, animism is the belief that animals, presumably plant life and other objects also, hold a spiritual identity. I suppose my problem mainly lies in that I am not a spiritual person and would consider myself on the more scientific end of the spectrum. This isn’t to say that I don’t, and cannot share some of the same views and feelings as a spiritualperson, but science has given me a great amount of real, useable, testable knowledge. Science has enlightened me, it pursues only the truth and for the secrets that currently elude our grasp within this universe. Without science this interview would not be taking place. If you read in an old fairy talethat someone; a witch perhaps, was able to communicate with whoever they wished, no matter where on the Earth, would that not be considered a great dealof sorcery? Because science has found a way to imbed many of it’s discoveries seamlessly within our lives they become overlooked. Yet we still look for magic in the world when it’s beneath our noses. I understand I have gone off point here somewhat and that spiritualism isn’t necessarily concerned with magic at all.

You are making me think of Carl Sagan’s great Demon Haunted World book, a treatise on how the wonders of nature and science are vaster than superstition…and more rewarding.

I suppose what I am trying to point out is that this existence is enough for me. As it currently stands I barely comprehend a tinyproportion of it. Adding spiritualism to a universe so vast and incredible, with no grounds whatsoever in truth, purely because it’s a nice thing to consider isn’t enough for me. Regardless to all that I’ve said, it doesn’t mean that I don’t wish animism was true, and that it’s not enjoyable to think about. I will make a point of familiarizing myself with your recommendations though, maybe they will change my mind on it all. 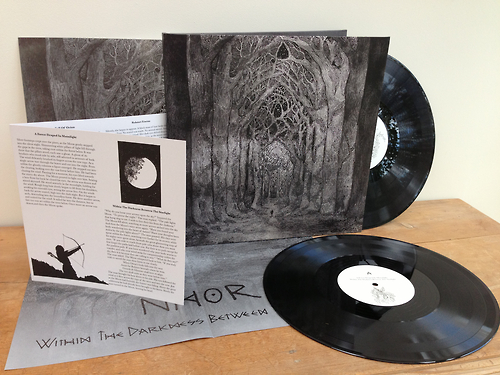 There is so much craft and care in your merch items. They are more “art” than the vulgar word “merch”. Can you talk about your aesthetic? The “Towards A Light That Dwells Within The Trees” collection was particularly stunning in presentation. I am a fan of Circle Takes The Square and really admire any band that pays such close attention to releasing monumental, gorgeous packaging.

I am uninterested in the monetary side of the music industry (that’s not to say that there even is one within this genre). I suppose a better way to explain it would be; what I release is more important to me than the return.
I understand that people connect on different levels and in different ways. Some people are able to connect to my music through the imagery, others are able to connect to my imagery through the music. Others can appreciate the physical efforts and become drawn into the idea of the project. I try not to overlook any of the levels that I operate at, because I know for that someone, one of the aspects may be the difference between understanding what I’m trying to accomplish.

That makes complete sense. Now…what dwells in the darkness between the starlight?

Originally the thought came to me as a question, an idea. What would the night sky be without the darkness to hold the stars aloft? Would the sky still hold my gaze? How could those glimmering lights exist? The idea of nothingness set deep inside my thoughts. I found that where once I thought of darkness as nothingness, I had now come to slowly realise that it is only from nothing that anything can arise. The void is the most fertile.

Hmmm. Makes me think of “The House Of Void” by the great Jarboe. Indeed. Your piano lines are so fluid. They often ripple like water and drop moonstones into the ID. It is heavy and intense and somehow affects me likedeep meditation, this light and very free surrender. What do you feel when composing?

I only write music when I feel compelled to do so. This is a feeling that I can’t explain. I have been drawn to write by omens, by inspirational experiences and by nothing but a simple will to write from within myself. When the moment is right, there is nothing more natural. It is like breathing, there is no effort on my part. I have said before that it feels like the music has already been written and I am just the scribe reciting from instruction. It’s as if I know the notes before I have even heard them. I once re-recorded a whole song to add a single note. (“Of Moth & Moon”) 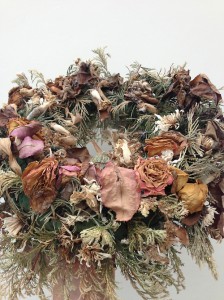 “Rohmet Etarnu” is an opus of patience. This huge, glacier-like arrangement. It isn’t the longest song on Within The Darkness… but it feels biggest, in some ways. Can you discuss the power and theme of this song, if you care to?

I’m glad that you felt this connection to the track. The clue to the power in question is within the name. Not everything is where it should be. The song is actually the re-working of the song “Giantess” from my first release. Both songs deal with the same subject, however “Rohmet Etarnu” was something I consciously wanted to do as my feeling on the subject had changed. Something I had once seen as almost a wandering entity changed into a global presence. Something that has, and will change our lives, something that calls out in such a long and majestic song we can barely notice the notes shift. 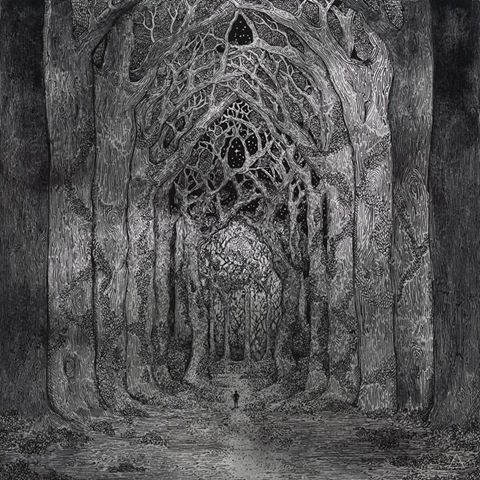