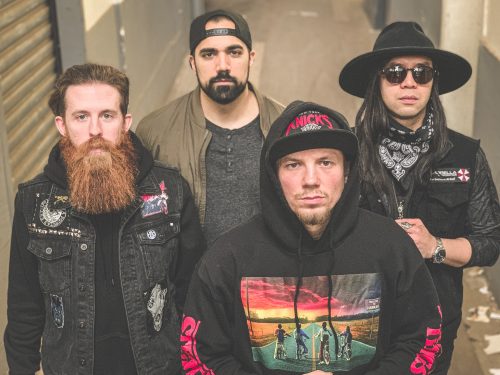 I saw Concrete Dream recently at a show in Poughkeepsie, NY where the New Jersey bred band was faced with the pretty daunting task of warming up a room for veterans Nonpoint and P.O.D., but their blend of crowd rallying alternative metal, rap and metalcore was up to the task. In short order vocalist Jeremiah Mayhem had gotten people to move up to the front of the stage and stop being wallflowers and the group made sure in short order that people would remember their name. That’s the way to not take a limited time stage slot for granted.

Noticing over the few weeks since that the band seem to keep an active social media presence, have a good attitude and care about what they are doing coupled with the fact I was still thinking about the concert, I decided to reach out. Now we have a cool ass interview and you can hear some music you may or may not already know about, homies.

Jeremiah Mayhem stops by Metal Riot today to answer some questions about the up and coming determined hard rock group. Fittingly as I am writing this into our system to publish the article there is a wild lightning storm starting to rage outside, which seems to compliment the energy of this band.

How’s it going today? How long you guys been a band? I had never heard you before I saw you live and it seemed like you have a real bond onstage. Did you all grow up in the same area?

Jeremiah Mayhem (Vocals) – For the most part we all grew up in the same corner of NJ. The drummer Juan and I grew up together and the bassist Alex and guitarist John came up in the music scene together. The band has been working together for over 2 years to perfect the sound we wanted.

I like that the band name can seem like some streetwise shit or also having a concrete plan for bettering yourself!

Being from the streets and raised in the projects, I’ve always had a dream to make it out by any means. It’s never too late to improve yourself and live a better life.

How was it playing with P.O.D. and Nonpoint recently? I know you already knew Hyro the Hero, right?

Yeah, Hyro and I go back to his early days opening up for Ill Nino. Dale “Rage” Resteghini relinked us through our managers. As far as P.O.D. and Nonpoint, it was absolutely amazing being as they’re two of my favorite bands that I look up to. Getting to vibe with them and meet Sonny and have him watch our set was an honor, not to mention he rocked one of our shirts. Really an inspirational experience.

How was it working with Ricky Armellino on your self-titled album? I feel like Ricky has worked with bands that have energy or hooks or heavy parts enough that it was a good fit.

It was great working with Ricky, he’s been there from the beginning with us helping us develop our sound. His outside perspective is great to have. He brings traditional skill and diverse knowledge of music mixed with our DIY ethics to combine into a great team.

How’d you get to know Danny Diablo?

Funny story, Danny’s girlfriend and my girlfriend were doing alternative modeling shows in NYC and met each other through that scene. Danny and I were introduced at Lucky 13’s and we instantly became friends. He asked to hear my band, liked it and brought us to our current manager.

I heard from someone at the Poughkeepsie show who said you were real chill and have sometimes played house party shows and stuff. Do you think it is important to try and keep perspective no matter where you are at in your career? I remember thinking you said some good stuff to the crowd at the show to make the most of the occasion that didn’t veer into cliché “go fuckin’ crazy now” (laughing) type shit. More about appreciation of the scene. I thought that was cool. 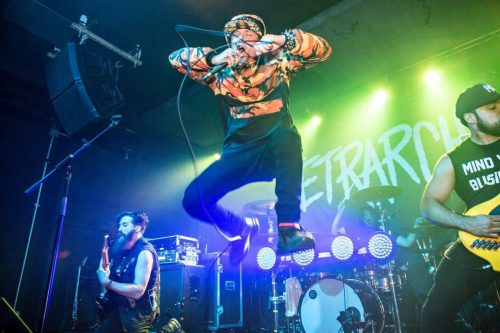 Are y’all lookin’ forward to your release party or what? It is cool you made the VNYL showJune 27th  all ages to celebrate!

I grew up always going to shows in the Lower East Side. It’s such an honor to debut our record in a section of New York where so many legends have done it before is. The city is a magical place. It’s the greatest on Earth. We are going to turn it up and get loose. It’s going to be lit af.

“One Thing” is fun because it really reminds me of times when the scene could come together and embrace different sounds and genres. I feel like we need more of that again because there is so much division and fighting out there. I am not saying if someone is like super against your dearest values or racist or something to pretend otherwise or kiss their ass. I am more talking about genre snobs who might think they are superior because they like a different sub-genre or hate rap or rock. Like, what happened to having good fucking times and not lording over people with a superiority complex?

The main objective of this band is to pay respects to both cultures that we represent, whether it’s the rock/metal or hip hop scenes. We are only a product of our environment. Half of us from the hood, half from the suburbs. We want to be able to speak to any kid in the world no matter where they are from or what music they love. We strive to have a song and message that can reach anyone. We believe in the power of these two genres.