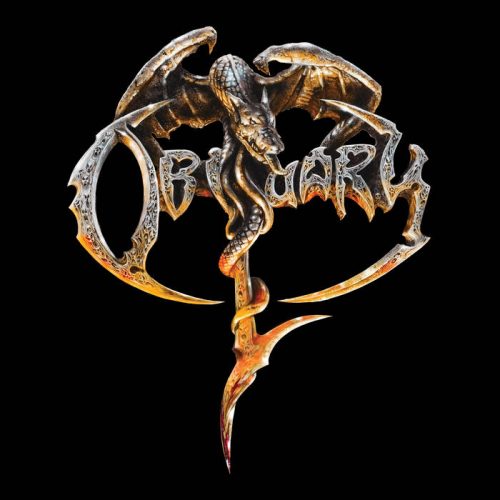 Death metal fans are raving about the new self-titled Obituary release for excellent reason. From the hysterical video for “Ten Thousand Ways To Die” that picks up where their Inked In Blood “Violence” clip left off and is bound to get a chuckle out of almost anybody, to more rock solid songwriting that builds on one of the most impeccable musical legacies in death metal, Obituary are both writing for themselves and pleasing die hard fans at the same time. The results will have fans crashing down doors like the zombie hordes the Florida greats seem to fear most.

Next year will mark thirty years since the group changed their name from Xecutioner and made metal heavier forever. It seemed about time for a self-titled album under those circumstances, but I spoke with one of the founders, Trevor Peres, to get to the bottom of it all.

This album sounds AMAZING. Let’s talk production. You’ve got fast and slow stuff, but it all sounds incredible. Any new tricks up your sleeves this time to get these results?

Glad you like the album, thank you. Um, as far as recording goes, we tracked the instruments the same way as always, so nothing new there. We did have Joe Cincotta mix the album for us. He mixed the Ten Thousand Ways to Die EP/Live album we released back in October of 2016, as well. That is something new for Obituary, so that attributes to the sound of the album, for sure. He has been a live engineer for us over the years, so it was natural to have Joe come on board.

I don’t think you’ve ever made a bad album, but this is my favorite since Frozen In Time. Inked In Blood also like this new one just felt super confident. Not that obituary has ever been shaky or something, but do you feel renewed focus?

Not really sure, to be honest. We always approach the writing process the same. I was somewhat pressed for time to get these songs finished, so maybe that has something to do with it.

This is the second album with the newer lineup. But… We named the album Obituary mainly because of the artwork. The cover is a simple black background with our logo. It kind of felt right to just name it Obituary.

Is it harder or easier to write new material now? A CD (ha, I still buy cds) with the Obituary name on it has high expectations with it. Do you think new lyrical themes are harder or arrangements or is it all sort of second nature at this point ? God damn, that end riff ride out of “It Lives” is gonna be so good live.

On the lyrical front, you would have to get directly with John about that part of the question. It is probably a little more difficult to create new music now compared to 25 years ago. Back then we were just kids creating stuff. Now, we are older dudes who became artists, so we knitpick our creations more now compared to back in the old days. LOL…
How does it feel to have new generations look to you guys and sort of be in awe that they can still see a “real deal” metal band. Also, any new metal bands you are enjoying lately? Love to see you tour with Abnormality sometime.

It is pretty awesome to be an influence to so many metal bands and musicians. Never would have thought in a million years that my music would influence younger artists. I feel pretty honored about this. Dust Bolt from Germany is a pretty god damn badass thrash band. Check them out.

“Loathe” from Ten Thousand Ways To Die was so punishing. How’d you decide to put that one on that record instead of on a “proper” full length?

We left that one off of the new album so it would make the Ten Thousand Ways to Die release more special.

“End It Now” is maybe my favorite on this record. It just has pretty much everything I want in an Obituary song. As much as I dig, say Cannibal Corpse or Deicide or whoever, I have always felt like Obituary was a little more raw and gnarly sounding than a lot of other classic death metal bands, like a blunt object upside the cranium. You can usually understand the lyrics but the band also sounds like they could derail the whole world and you maximize the power of every riff over having to always be the most technical like some DM bands. The 2:16 riff right after the solo in “Kneel Before Me” is a perfect example. It just kills! Not novice shit but no need to be super showy either. Bludgeoning evil! Does that make sense?

Sometimes a simple riff comes across heavier. Playing 9 million notes in a 3 minute songs, doesn’t make the song more brutal or heavy sounding. A riff that is more simple or basic has more feeling.

One of the fun things about reading Choosing Death was how often it seemed like bands were like, “Shit, we need to make our vocals sound as cool as Xecutioner or we will be seen as wussies! Haha, is it fun to go back and read that kind of stuff from the early days?

Totally, I love that book. I need to get the newer updated version. Anyone that is into Death Metal should read Choosing Death.

How has it felt to be working with Relapse? Seems like they have really been prioritizing you. I mean, obviously I am sure they fucking love Obituary, haha.

Great group of people at Relapse. They are definitely hard workers and fans of the music they push.