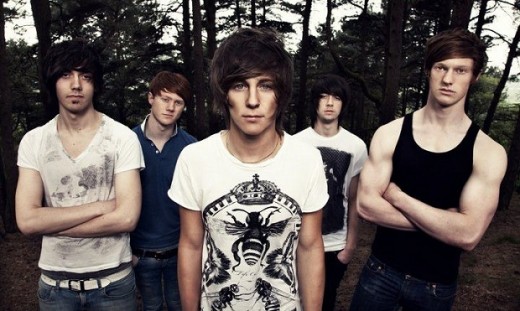 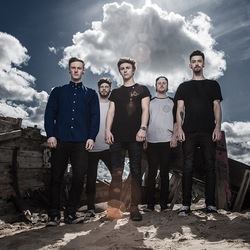 Let’s talk about your band name. What is the meaning behind it?

The band name was inspired by a newspaper article describing the megatsunami that hit the coast of Alaska in 1958. We found the event fascinating; with a wave higher than the Empire State building it swallowed up the whole of Lituya Bay! Of course when we saw the headline ‘Oceans Ate Alaska’ we immediately knew it was the right name for us.

You guys have a couple of shows coming up very soon. What can the fans expect to hear you play?

We are definitely playing our brand new song “Blood Brothers,” but if they want to know the rest of the set then they’ll have to come see us!

You guys are one of the lovely bands featured on PUNK GOES POP VOL. 6. What song did you choose to cover and why?

We chose to cover “Drunk In Love” by the one and only Beyoncé! When she first released the track, we knew it would be perfect for us to cover. We felt the sample at the beginning would go hand in hand with a heavy pattern over the top, and the rest of the track has enough hook lines, dynamic changes and just enough room for us to make it our own. When we found out we were on Punk Goes Pop Vol. 6, we instantly thought of “Drunk in Love”! We are all super stoked with how it came out. Hopefully you guys like it too! [youtube]http://youtu.be/23ySdftuMog[/youtube]

If you guys were allowed to have covered a second song, which one would you guys have picked?

The band was just signed to Fearless Records. How did that come about?

We have indeed! We spent the past couple of years writing and recording our debut album, and as soon as we had some mixes back, we sent them off to Fearless. Much to our surprise they got straight back to us, and things moved from there. It’s an absolute honour to be a part of the Fearless family now. It’s literally a dream come true for us!

The band’s debut LP via Fearless is dropping in 2015. Can you tell us anything about it?

We can’t give too much away as of yet, however we can tell you that it is by far our proudest work! We have all developed individually as musicians, and together as a band, and through this we have found the exact direction we want to go in. We all feel incredibly passionate about this record, every single last detail has had so much thought and care put into it, making certain that it’s perfect and unique to us! The composition is still very ‘OAA’, just a lot more matured; basically we took our favorite elements of the band, and pushed them all to the extreme! We really are so excited to get this album out for you guys. We hope you love it as much as we do!

Lyrically, this album is inspired by growing up, leaving home and finding your own path in life. It touches on feelings of loss and confusion, topics that hopefully a lot of people can relate to. Musically, we have all been inspired by many different things; whether it’s an individual musician, a band, a friend or family member, our fans, or even something simple like a sound we heard during day to day life. Overall this record is the result of a very broad spectrum of inspiration, which is partly why we feel it is so unique!

Is there anything you would like to let the fans know?

We’d like to let you all know that your support doesn’t go unappreciated, and we are incredibly thankful for everything you guys do! More music will be coming your way very soon so stay tuned, and we can’t wait to hear your opinions on our debut album.