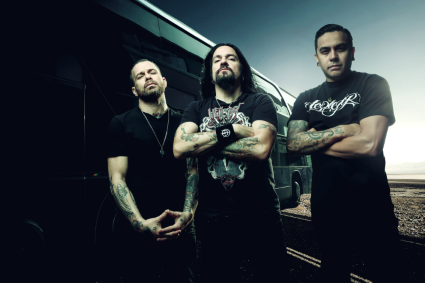 Nothing lasts forever. Making a record has a stage where it is a sense of duty in a lot of ways. If I’m doing something purposeful, it’s rewarding rather than “liking”. There’s quality actions and lowerquality actions. I like to sit in front of a television set for hours and watch old espisodes of the Sopranos. Is that helping me or anybody else? – Tommy Victor

Prong have been on fire ever since they came back strong with the awesome Power of the Damager. Tommy Victor is known for his work in Danzig, Ministry and of course Prong as well, but his first baby is the most important, I’d say. Prong just have a unique sound that no one can match and the legacy is intact on the colossal new Ruining Lives. From the sonic attack of the catchy but ballistic “Turnover” to the thrashy “The Barriers” or the industrial metal riffing of the groove heavy “Absence of Light”, Runing Lives shows that Victor is still one of the most interesting innovators in metal and hardcore. There’s a little bit of everything you’ve ever loved about prong on here, but it isn’t forced or gimmicky. This is just pure 100% Prong and thank fucking God.

Every time Prong release an album it pushes the shitty dial of the scene back towards goodness for a much needed respite.Bands like Slipknot, NIN, Korn, Rob Zombie and more give heavy props to Victor’s contributions to metal and you should too. Shit, with the exception of NIN, Victor blows away most of those other bands in his sleep. Dude is just a natural for severe and “true life” metal. I didn’t think they could follow up our 5 star rated Carved Into Stone release with something as powerful, but the new record really kicks ass as well.

Click HERE to read this Metal Riot chat with a metal legend. 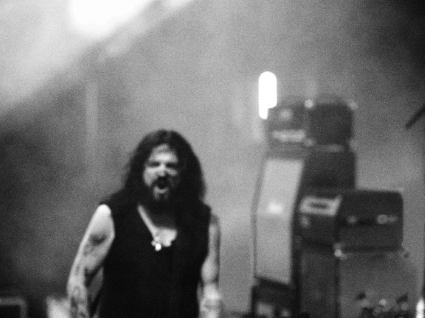 Hey Tommy. How are you, man. I haven’t interviewed you since I worked with Crusher Magazine a few years ago for our mutual friend Christine.

Hey, I remember you. I have a photographic memory of that discussion, actually. I know exactly where I was.

You’re always one of my favorite people to talk to and now you are playing with my friend bassist Jason Christopher who I have known since I was a teenager. He’s a good pal of mine.

Are you kidding me?

I need to let him know I did an interview with you. I just got off the road with him. He’s amazing. I love the guy and he’s a great bass player. You need to tell me some “what he was like when he was younger” stories.

(laughing) He was a maniac. I don’t know if I should. But he was always a really good guy.Jason always has loved heavy music. I was wondering how you guys met?

Actually through Scott, our manager during the Carved Into Stone period.

Very cool. Carved Into Stone we gave a 5 star review on this site. “Eternal Heat”. SO much good, high energy stuff on that one. The new record, “Windows Shut” really blew me away. That song has everything I’ve ever loved about prong in one cut. The melodic side but still the heaviness. “Come to realize” has that amazing opening riff. You’re still doing your own thing, man.

I mean, there’s something there for everybody. That wasn’t a conscious effort. Doing Prong records for so long, I’m hard wired for it. I think we came out with a very good amount of good songs for this record and, um, there was only twelve songs written but they all seemed to turn out nicely.

The cover art just looks like a proper Prong record as well. I love looking at a band’s first album art looking all the way up to the newest, whether Slayer or you guys or Black Sabbath. You remember the journey.

I was really happy with the packaging. The vinyl is a double fold out and it came out fantastic.

How was the recent European tour?

How did it feel working with Steve Evetts on this one? He has done so much great work from Snapcase to Glassjaw to Sepultura.

It was easier. I had to gain trust with him with the last one but based on the results of Carved Into Stone I had gained trust with him, so that was over and done with this one. I trusted his direction and knew he would do a great job. We had a great experience working on this record. Not that we didn’t in the past but there were a few times when I wasn’;t used to his methods but this time I knew what to expect.

You are handing your baby into a producer’s hands so that’s got to be a major thing .

Yeah. I really have a lot of trust for him and that helps. I let him do his thing. He played a little for me and I said fine. We didn’t even have to get into many major discussions about stuff.

There’s some titles I really love on here like “Self Will Run Riot” or stuff that seems to be about facing and overcoming limitations or calling things out as you see it. What is “The Book of Change” about?

“The Book of Change” is about the I Ching, an almost Taoist vibe in that song, not to sound too metaphysical. Accepting where your spirit guide is gonna bring you. We’re pulled from another source and you need to consult that somehow anyway you can. We live under a veil and it is dictated by our senses. Somehow, if that is gone there is something else there. That’s really what we are supposed to be dictated by rather than only what we see andfeel and taste. It comes from reading and from the I Ching, the hexagrams that supposedly say there are a limited amount of possibilities in the world. In China they somehow discovered them and I sort of agree in that. In any situation you’re in there’s a limited amount of possibilities of what that could possibly be. It’s figuring that out. A lot of times we don’t think and what we think of as reality is pretty devoid of that depth.

Prong is a band that I feel like I can always apply to my life. Your lyrics are just real. Some newer bands just say whatever. It has no point or is just to say the most brutal thing. Your music is like real hardcore where you can apply some of it to your own experiences and life. and it is funny because this album is called Ruining Lives.

Yeah, sometimes I get pissed off a little bit because people don’t understand the title Ruining Lives. it’s not US that’s runing lives. I’m glad,Morgan, that you are on that wavelength with it. That’s the focus for putting a band together, What’s the point of lyrics? You’ve got to have some message. If the vocals are just another instrument you might as well be doing scat jazz music or some shit. If there’s nothing behind it or an attitude like especially in  hardcore, what’s the point of writing lyrics that are just screamed and undeciphered or misinterpreted.

It’s a funny thing because even a hardcore band like Murphy’s Law, the songs can have goofy themes like “Quest for herb” but it still is about getting people to get up on stage and dance or mosh or have a blast and it serves a purpose to unify. Some of the bands now it is just fucking stupid or to sell merch.

They just want to get laid. It’s a stylistically different version of the hair metal bands in the late 80’s.

I think I’d rather have Warrant than most deathcore. (laughing)

I think the songs are better. (chuckling) 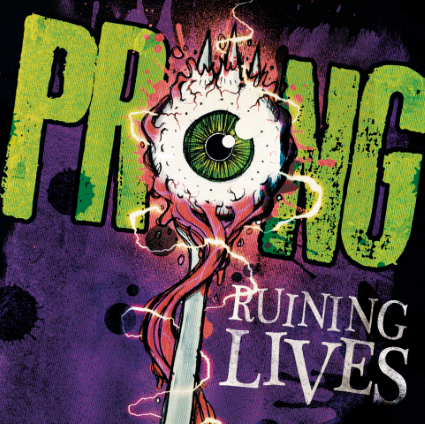 I agree. But yeah, I was happy to hear this new very non hair metal Prong record. The vocals are so present.

There’s been a little bit of shock to that, especially in the metal world. You’re supposed to just bark. Who’s the best singer today? Randy Blythe. He’s the best barker. Don’t get me wrong. I love Randy and I love Lamb of God, but that is what it is. Not everyone can be that. Hopefully people can remember that Prong has always been an alternative metal band and that’s part of the vibe of it. Again, the articulation is important and the song titles and lyrics. Maybe the next record wont be. I wanna kick your ass ‘cuz you disrespected me songs. It’s about writing songs and constructing things that have a good chorus. It’s rock n roll. It’s not progressive or jazz. It’s not yes. It’s not Tull. It’s based upon bands like initially Cream and The Who and the Rolling Stones. Implanted formats in rock music. Not saying that you have to submit to that format but that’s what I grew up on. If “Brown Sugar” or “White Room” or even to get into Kiss with “Strutter”, I can appreciate it. That’s the format.

The title track, you guys nailed it.

It’s not like there’s a major design and a map. After doing eleven Prong records or whatever it is, there are certain confines. I believe that this record and the response of fans of Prong loving this record and appreciating it shows that it’s good.

Do you feel that, um, obviously having done music for awhile…do you like writing your own stuff or travelling more these days? Or fitting into a band like Danzig where you are involved to whatever degree that is appropriate for the project?

Well, I don’t know what like means, really. Like is a strange word. Things that people like they also don’t like. Things that people like aren’t necessarily good for them. Not to get too semantical about it. Those things are all momentary. Nothing lasts forever. Making a record has a stage where it is a sense of duty in a lot of ways. If I’m doing something purposeful, it’s rewarding rather than “liking”. There’s quality actions and lowerquality actions. I like to sit in front of a television set for hours and watch old espisodes of the Sopranos. Is that helping me or anybody else? Not really. I don’t like necessarily being in a vocal booth for 14 hours and standing there perfecting vocals as much as possible for a record but I’m getting something done and it’s part of a process that maybe people can respond to. affecting people with a lyric or your work is a positive experience. As far as touring goes, I don’t have to roll into a town and conquer it. I’ll walk around a little bit and experience a sight or two. I don’t have to goto every bar in town like I sued to after the show or do everything, you know what I mean? There’s ways of staying in between extremes of experience.

Figure out what makes it work for you. You can set your own rules.

No, it’s not about setting rules. I adapt to other people. Realizing that is important has enabled me to survive. Setting rules down, no. That’s not in my agenda anymore or hasn’t been for awhile. I set boundaries but rules are something else. 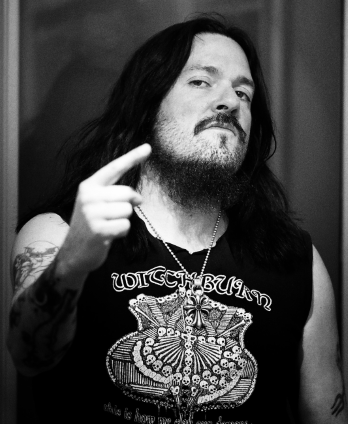