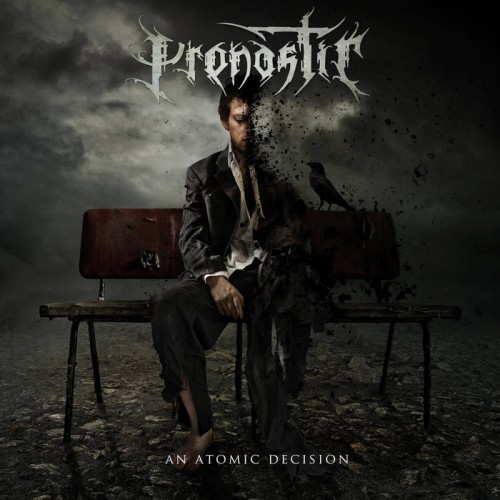 I was going to take the day off from metal writing due to Lemmy’s death, but then I gathered myself and decided the show must go on. Lemmy knew rock n roll was a full time job and he taught us all that every day. We don’t even really take a holiday break around here, just crank the tunes more. This seemed due reason to post my final interview of the year for Metal Riot. And I can think of no better band than Pronostic from Montreal to fit the occasion.

Relentless and yet full of startling highs and growled anguish that defies the lows, the band are much like this past complex year was itself.

This Montreal older school sounding tech death band are monstrously impressive musicians, hovering under the radar but with killer material and lots of shows under thier belts. I do not know the band that well and was approached about them recently to check them out, but right away listening to their latest LP An Atomic Decision I recognize they are adept in walking the realms of metal. You don’t get as good as the music on their title track or or the solo frenzied brilliance of “Useless Wait” by being poseurs. This band sounds like they live for this.

That’s what music ought to be about.

Fans of Allegaeon, Hate Eternal and Neuraxis will quickly cater to aspects of the band’s potent sounds, but especially striking is the melodic power that seeps through the fiery charge of these songs. An Atomic Decision is with only the somewhat garishly nu-metal sounding monicker of an instrumental titled “Menstrumental” (nonetheless a terrific classical/metal showboat reprieve) slightly marring the proceedings.

And I’m sure we can all relate to the cover art.

Metal Riot recommends you dive in and prepare to step into the New Year scarred but unbroken BELOW.

How did this project form? Were you influenced by your own Canadian metal scene or more international bands? You have a certain focus and tightness that reminds me of Cryptopsy if more melodeath.
Nicholas “Le Fou” Wells- Alex, Charles and I, Le Fou, all went to the same school in the area of Mont-Tremblant Quebec. Sharing the same passion for music, we decided to form a new band based on our influences, ranging from the Quebec metal scene (Cryptopsy, Augury, Martyr, Neuraxis, Quo Vadis, Anonymus,Negativa) and the international scene (Children Of Bodom, Nile, Wintersun, Behemoth, Hate Eternal, The Black Dahlia Murder, At The Gates, Dimmu Borgir, Cradle Of Filth…).
What were some topics you wanted to adress ahead of time or did that come after the musical arrangements?
– We write our music mostly before writing the lyrics. This way we can use the essence of each song to create musical and rythmic patterns between the melodies and lyrics. Like choosing where to have both vocals or just lows or highs. When the music goes from extreme brutality to smoother ambiances, we try to adapt our lyrics to the sound to really get the most out of every part of each song.
“An Atomic Decision” and other songs have really cool tones. It might not be super hi-fi production but still sounds really great. I think some bands overthink shit. You guys just made a kick ass record with tight performances and good tones. Agree?
– Yes, we totally agree. We don’t like to put too much shit in our music. We try to keep our music as natural as possible, but we do like to experiment and evolve within our writting. We just try to stay true to the message we want to send and be straight forward about it.
Who did the kick ass cover art? I feel like it could be the image for some cool Netflix mystery show, haha.
The Artwork was all done by Colin Marks at Rain Song Design. He did covers for bands like Origin, Allegaeon, Whitechapel, Suicide Silence, Exodus and many more. He’s awesome to work with!
In the metal scene, do you feel people lose perspective or generally have level heads? I think if you are going to be doing this then bands need to realize it is not all glory and you have to love it. But it makes the hard earned victories even more moving.
Yes, a lot of bands lose perspective and don’t realize it. We just stay down to earth and do what we do. It would be stupid of us to act like some bigshots, like many bands we’ve played with. As soon as some of the bands play one or two big shows, they seem to think they’re the kings of the world. I think it just makes them look like a joke more than anything.
What did you want to bring to this record to make it “not just another death” album?
We wanted to take our recipe from “Deviated Inner Spectrum” and twist it around a bit. We took what we enjoyed from that record and just pushed it to the next level. We just stick to our own stuff, we don’t want to sound like anyone else.
“Passing Towards The Afterlife” is a solid closer. I like the kind of tricky Megadeth intro and the great first verse of interesting percussion and harsh vocals. The whole arrangement is cool. Do you believe in an afterlife? I also like the kind of spacey melodic guitar in the background, which reminded me a bit of some textural stuff Decapitated did on Carnival Is Forever. I like when bands mix things up.
Yes, the arrangement for “Passing Towards The Afterlife” really is awesome. The whole progression of the song is very unique, with a sort of majestic ending, if I may say it like that. It was the perfect song to end the album. I can’t say we do believe 100% in an afterlife, cuz you know, no one knows if there really is one. But we do believe that everything you do leads you to your destiny whether it be an afterlife or not.
What are your upcoming plans? Any lesser know homies bands you want to shout out?
Trying to get out there and have our music reach new listeners. We’ve been playing a lot in our area, but we’re really pushing to go around the province of Quebec and hopefully hit up Ontario and the rest of Canada. Obviously, we’d like to go to the States and Europe and all the rest of the world, but let’s be real, it won’t just happen by sitting on our asses hahaha! We’re just doing it one step at a time and trying to go as far as we can. Shoutouts to Obliterate, Rosewood, About:Blank, This Is Death Valley, Drag The Lake, Weston, Depths Of Hatred, Goorgée, Chariots Of The Gods, Faithful Synthesis. 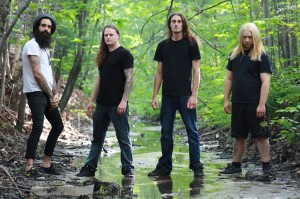