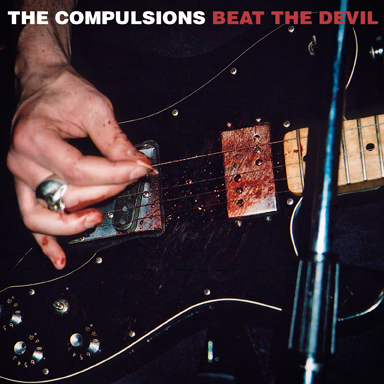 Morgan Y. Evans: Life treating you well, Rob? NYC cool? This is a metal/hard rock site but we’re gonna dig deep. Identity is the theme. Listened to a buncha recent songs I liked tonight from bands like Cavalera Conspiracy all the way to your band. All bands that do what they do… a natural thing. You’re not just empty image. It’s passion. Granted, The Compulsions have retro and classic rock elements people will recognize. Hard rock. But you can hang with the times… it’s modern as well. Not just a rehash. Granted, you have someone like Sami on your team who is a veteran/real O.G. Growing up, I dug into classic rock mags as much as metal. Terrorizer AND Rolling Stone. Spin. Indie rock. It’s ALLLL rock ‘n’ roll. Tribe 8 or Korn or fucking hip hop with the Jungle Brothers or blues like Blind Lemon Jefferson or black metal… I guess my first question is, for those who don’t know, how did you become the musician you are and play what you play with such conviction?

Rob Carlyle: First of all, life is good – thanks for asking – and yeah, NYC is cool. And I agree with what you said, it’s all rock ‘n’ roll. To answer your question about conviction: I’ve always believed if you’re going to do something, you do it all the way. And if you’re going to say something, say it loud and proud. Don’t hold back. Just go for it.

MYE: “Beat The Devil” is finally out. Living a real rock ‘n’ roll life is like something out of Faust. It’s either a deal with the devil or hoping to outwit the devil… hard work and conviction and praying you can run the gauntlet to success and not burn out. Along the way you’ll be loved but you’ll also face resistance. What keeps you going? How does it feel to have made your first full length?

RC: The fans and the positive feedback keep you going. It never gets old when someone says they like what you do. How does it feel to have made the first full length? It feels great. After three EPs, it was about time.

MYE: Hubert Sumlin played on your record. I mean… he played with Howlin’ Wolf!  As a true music fan AND an artist, it must feel amazing to wake up in the morning and drink coffee and know you shared a recording with this cat, right? Can you talk about the blues influence in your writing and especially how this collaboration came about before he passed?

RC: I went to see Hubert play a few times in a blues bar on Bleecker Street in the mid ‘90s. Then years later, in 2004 , I wrote this song called “Shut Yer Hole” and thought it would be cool to have Hubert play on it. [Compulsions co-producer] Hugh [Pool] coincidentally knew Hubert’s manager and next thing you know we had Hubert in the studio. To answer the second part of your question, the blues has always been a big influence on me, especially the Delta blues. I remember as a kid reading interviews with Jimmy Page and Keith Richards and they’d always mention guys like Bukka White, Son House and Robert Johnson. So I checked those guys out and I don’t know how else to describe it, but it was the deepest, darkest music I’d ever heard. I was hooked.

MYE: The Compulsions prove you can have style and substance. You can have edge and professionalism. Back in the day, or even today, with younger wanna be “glam pups,” you have party boys and girls who maybe didn’t learn the lessons of the past or are just having fun, but… in the ‘80s it was pure decadence. Your band has the decadence but it isn’t a dead end charade or whatever. The original Guns N’ Roses, for example, they partied so hard but learned their lessons. Your music evokes the grit of the ‘70s and ‘80s but is still current AND you’re a well oiled machine. Do you agree you can’t “beat the devil” and succeed long term without a bit of restraint sometimes or is it still possible to be a 24 hour party person?

RC: You can be a 24 hour party person but not 24 hours in a row. You gotta take a nap every once in a while. 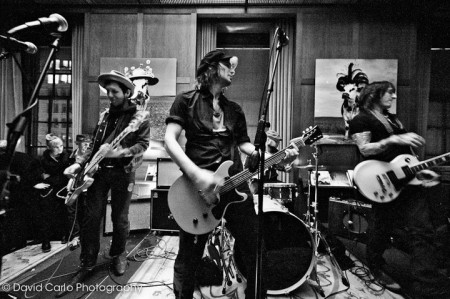 MYE: How did the writing for “Beat The Devil” differ from your trilogy of EP’s? This is sort of like you’ve been through hell (no pun intended) and now are looking forward. I love how dark the music is but still reflective.

MYE: This is a bit of a side thought but it seems pretty cool that Axl Rose doesn’t mind some of his band playing in The Compulsions. I mean, I know “Welcome To The Jungle” was also inspired by Hanoi Rocks, so… but it’s cool. Goes to show people don’t always give Axl fair press. I mean, they’re a different band but until recently I know James Hetfield of Metallica was really against members of his band playing in side projects. I think it’s cool and just adds to the allure when bands cross-pollinate a bit. Plus the players in The Compulsions now suit you perfectly and it certainly doesn’t take away from their other projects’ charm or power. Thoughts?

RC: Yeah, we’re all one big happy family. And I agree, Frank, Richard and Sami are perfectly suited to be in The Compulsions. You can’t beat those guys. I hope we make a lot more music together.

MYE: Can you tell me about the bloody cover art for “Beat The Devil?” It’s got that dangerous look where if you saw it on vinyl in a Rhino Records shop you’d grab it and say “Fuck! I gotta check this out.” It kinda reeks of danger like an old Stooges record or something.

RC: That was taken years ago at The Pussycat Lounge in New York City by a photographer friend of mine named Roderick Angle. It’s from an early Compulsions show, long before the current line up. When people first saw that photo they were like “Wow, that’s cool. You should use that as an album cover.” So there it is.

MYE: What are you proudest about with “Beat The Devil” as far as the challenges it posed that you overcame or what songs came out even better than you expected? I love when a record is finally done and you can look at it and know it’s a chunk of your life for anyone to experience. Albums… they last forever!

RC: I have to agree with that. The song I’m probably most proud of is “Dirty Woman Blues.” It starts out almost like a backwoods blues song but ends up taking you to some pretty far out places. And of course I’m proud of everyone who played on the record. Frank, Richard and Sami are the core line up but also my friends Mekia Denby, Bruce Edwards, ILan Frid, Tomek Miernowski, Hugh Pool, Ken Rich, Georgie Seville, Jon Weber and Chris Wei and of course, Hubert Sumlin… everyone killed it.

MYE: Some great Compulsions material is fairly mellow. “My Favorite Wine” and “Ea$y Money” come to mind. You seem just as comfortable with laid back, what I call “booze and smack” ballads as with upbeat Compulsions stuff like “Rock ‘N’ Roll Johnny.” As for “Ea$y Money,” do you think it’s still as easy to get money for nothin’ and your chicks for free as when MTV started?

MYE: Lastly, let’s leave this off with some food for thought. 2011 was a year of great protest and change. How do you see your band’s place in world events… above or embedded? You’re not a political band but you have a certain salt of the earth quality, in that the songs often tell school of hard knocks lessons (although you guys also seem like ‘70s rock gods at times, which is kind of more elitist than populist, hahaha). But yeah, what do you hope the average person takes away from a Compulsions record and can apply to their life? Often I think a song that simply changes my mood (for better or worse) can be just as important for shaping my headspace as a song that is really specific (like Rage Against The Machine, for example).

RC: No, I don’t think The Compulsions are above world events. We’re on this planet like everyone else. And if someone listens to The Compulsions’ lyrics, I hope the message they get is basically “Be a good person and be true to yourself.” And if they don’t listen to the words, I hope they at least think it sounds cool.

More On: Hard Rock, Exclusive, The Compulsions,
share on: