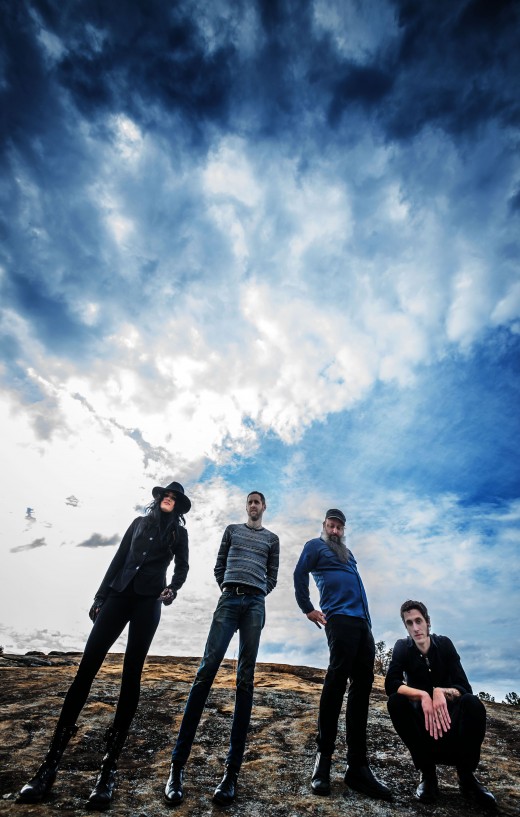 Even if Royal Thunder never recorded another note (perish the thought), the music they have already produced would likely survive and be heralded as classic down the line. The southern blues and sludge elements of the band’s striking sound has expanded on their new charismatic sophomore album Crooked Doors into even headier and moodier hemispheres, but retaining pure rock n roll drive. These stormy “thunder” (ahem) clouds of psych rock and gypsy mourning can be found rolling colorfully next to harder rocking tracks that retain the bands powerful groove and Pandora’s box will to survive hardships . Whatever they touch, this outfit is frighteningly capable. Vocalist Mlny Parsonz (one of the indisputably best rock singers in the game right now) and the boys create music that makes even true believers generally gasp at the unabashed power and authenticity. You’d never accuse this band of lacking feeling or inspiration, simply a group that make half the bands out there seem creatively malnourished.

Josh Weaver (guitar) fills us in on some of the record’s creation BELOW. 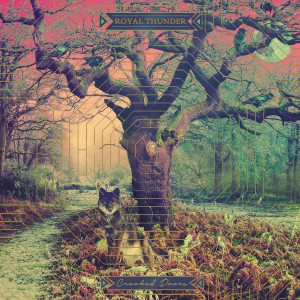 I’ve been wanting to interview the band since I heard “Mouth Of Fire” on the first EP and I was like…’holy shit’! I feel like you’re saving rock n
roll again by reminding people the bottom line is good songs.

JW: Well, thank you. We’re really just doing what we love to do. Playing rock music.

I’m not trying to be grandiose but there’s so much vibe. Your new record is really transformative. Even the hard blues stuff you’ve done has a lot of power. I think Erik from Watain said recently that rock used to be dangerous and rarely is anymore. It’s not like your band is doing anything super nihilistic on stage but the music of your band , even the slower songs…it has some edge, spark and chemistry to it.

Hmmm…we really think this is an album we’re more coming into who we are as musicians on. We’re just all growing. I think a lot of it has to do with we toured so much. The road played a big key influence on this latest record, being out and onstage almost every night. Experiencing life. Um, you experience things in life on the road. I feel so fortunate we’ve been able to do what we do, but being onstage changes something in you as a musician.

There’s a lot of dynamics on here. “Floor” has this dervish quality I love in a band like The Doors or The Cult, almost. Some stuff is almost psych rock. But you can still tour with a band like Enslaved and pull it off. It’s really awesome.

I love your playing on some of this. It almost reminds me of how on Kylesa’s Spiral Shadow Laura Pleasants expanded her range to more higher octave playing. “Ear On The Fool” has some weird proggy riffing. How often do you play together? Some songs feel really jammed out, but I know also Miny spent a lot of time on vocals for the new record. Did that affect the arrangements?

Yeah, I mean…we play together quite often and especially once we’re ramping up closer to a tour. When we’re getting closer to a tour we’ll play almost every day til we leave. We’ve played together all of us so long at this point, there’s just so much that comes out. We pick up on what one another’s doing. I’ve been playing a lot more solo stuff. Youre talking about upper register, I think being on the road made me more comfortable.

Also “The Line” almost seems written for live. It’s got a driving bassline and some of the most roaring performances from the band yet.

Yeah, it’s got a lot of energy. I think that’s gonna be a fun one to play out live.

My favorite on the album is “Forgive Me, Karma”. It’s got a snakecharmer quality.

I really enjoy playing that one. It’s a fun song.

Almost reminds me of trippier Mastodon, guitar-wise. Did the acoustic EP CVI:A in between full lengths give you a wider idea of what the band could be? I’ve probably listened to that EP like 100 times! Every few days, still!

Oh yeah, definitely. It really did. Even, funny…we’ve always been kinda an evolving band. We’ve been even playing “Hotel Bend” out some.

Love the mellow guitars in that song.

But it’s completely revamped. Going into the studio for CVI: A, it did make us see how limitless things could be done with a song or how we could revamp it. It gave us a lot of ideas for this new album and really pushed us. It got us out of our cofort zone. We didn’t want to just record the songs exactly verbatim as they were on the album, only acoustic.

You could hear it on “Black Water Vision” or DEFINITELY on “Whispering World.” I can’t decide which version I like better of that last one.

That’s awesome. Some of the stuff, I’ll kind of incorporate different licks from the acoustic version live.

How fun was “Glow” to play? You got to fuck around with slide guitar on there?

Yeah. I’d never played slide in my life before that! It was, man… it took me forever to get it but it was the vision I had for it. By the tme I was
done recording that song I had some experience (laughing).

I’ve heard it’s addictive. I know Chris from Unsane has been devoting most of the new Cutthoats 9 stuff to that side of his guitar playing.

It’s another outlet to express yourself on the guitar. It’s great.

You’re a band like The Rolling Stones or even Fleetwood Mac where you can play different types of stuff and it’ll still keep your core fan base I’d
wager…cuz it still sounds like Royal Thunder.

That’s awesome. The cool thing is I think we’ve all come from a unique place. I don’t think any of us were professionally trained. I think Evan played in drum line when he was younger, that’s about it.

Way to throw him under the bus, dude! Just kidding. That’s where all those marching beats come from.

(laughing) We all pretty much taught ourselves wht we want to do and it gives us a unique voice.

This was  a sophomore record. If you’re lucky you’ll write your Nevermind after your Bleach. But travelling so much and the other transits you went through that I’ll respectfully avoid mentioning, was it a hard record to make?

I definitely look on this record with pride. I’m very happy and pleased with how it turned out. It’s another chapter of who we are as people and where we were at when we recorded it. The songs…we had probably three or four tunes that were written but even changed some in the studio. We had really no idea what the album was gonna look like when we went in the studio and deep down you think how it’ll compare to the last one you did. I’m not worried about popularity but doing the best I can. Making something where I feel that I’ve grown as a musician. We got in there and it was awesome, man. It was magic once everything started to form. It’s like waiting for a child to be born. I’m blown away with how it turned out. Through the travelling and jet lag and trying to find time to write, that’s where the rub of life and a lot of inspiration comes from. It gives us the struggles , pain and happiness for our songs…everything we have. We’re never like “let’s write a slow or fast song”. It’s always naturally come about.

Looking forward to the tour with Wild Throne?

We’re itching to get on the road. It’s been too long for us. It makes us feel alive. With the recrod coming out right around the corner and tour dates, we’re chomping at the bit. I want to thank you and all of our fans. It’s a dream come true for something we put together from our soul to be enjoyed , loved and related to by people. It’s humbling. Thank you all for your time and all the support. We’re looking forward to seeing all of you on the road.

Definitely music that can get you through your day better.

I’m glad to hear that it’s doing that for you and hopefully for the rest of the fans. 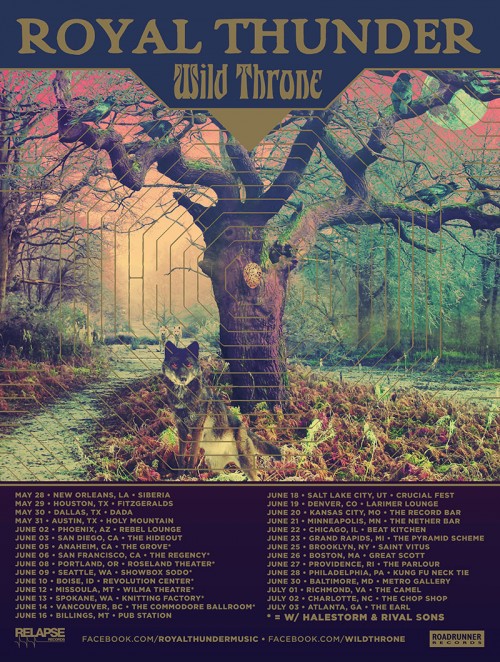