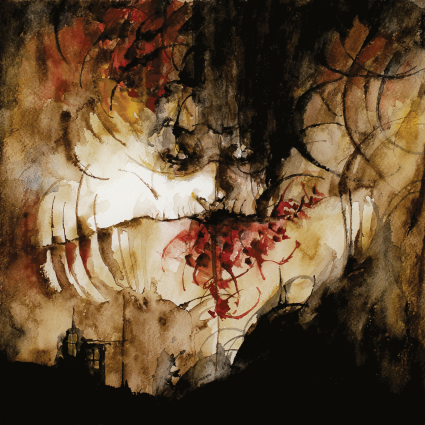 Shining‘s IX: Everyone, Everything, Everywhere, Ends is upon us and it’s prime time for scaredy cats out there to bust out their “The End Is Nigh” placards. Niklas Kvarforth discusses the creation, cultivation and concerns behind the 6 new tracks BELOW. 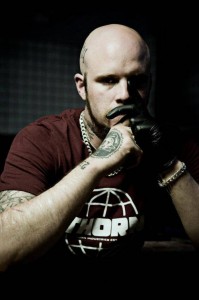 After your initial inspiration period upon defeating writer’s block, once
you got over the perhaps shock and enthusiasm of writing a chunk of material
again, did you then try organizing the songs into a coherent flow or find the
theme or did lyrics and direction come later?

Once I am composing or writing, I am not really in control of where things are heading, it always comes to me
naturally. The coherent flow of each of my albums, both music and lyrics, are
all being formed during these, often rather brief, moments. But yeah, the said
writers block took quite a toll on both myself and the others in the band and
not a day passed when I didn’t think things had come to an inevitable end, so
once the process began there was obviously an enormous sense of relief knowing
that I still had a thing or two to say artistically.

Should we consider the new
record title as evidence we should enjoy our lives before the inevitable end
or , perhaps, that youu are planning the destruction of this world? “A
gangster only ends up in a jail or grave” is a lyric from a new
Blackalicious song that I like. Why are humans so self destructive as a
species?

Oh, how I wish I could be the one who ends it all for us, but sadly, that’s
not the case, although we do our best to push things in that direction. The
record title can mean several things, but definitely doesn’t refer to
anything life-affirming, or attempting to suggest that anyone should enjoy
anything. It might sound a bit pessimistic, but that’s the way I personally
feel and that’s the original and still ongoing raison dêtre of Shining.
As for that gangster reference, well, 2pac said something similar and yes,
that’s the obvious conclusion to thug life I would say, although I have no
idea why you are asking me this. Being a criminal doesn’t necessarily mean one
is acting out of self-destructive tendencies either. Most criminals I know are
criminals because there’s no other option other than either live outside the
law or put a bullet in your head.

If the universe is as vast as it appears and
perhaps even multiple parallel universes, does nihilism make more or less
sense? Some people will always argue for or against if our actions matter,
though it seems suffering eventually stalls out as a productive means of
creativity.

Well, regardless of whether any
actions matter or not, I have chosen my path and I stick to my agenda. Of
course there are always moments when one questions the choices one has made
and if anything at all even matters, but at the end of the day, I know
perfectly well what I want to do with my life and what I need to invest my
time in to reach these pre-set goals of mine. There’s no turning back.

How was your experience working with the band Sigh on their Graveword release?
I’m looking forward to digesting that whole record.

It was obviously an
honour to be approached and asked to contribute, as Sigh always meant a great
deal to me in my younger years, and still do. Although I must admit that it
was quite difficult recording my parts as Mirai is an extremely complex
musician with pretty fucking unorthodox ideas which aren’t exactly easily
understood by someone like me who is used to rather basic arrangements in
general. However, that was obviously part of the “fun” of doing it. I just
recently heard the whole album and although I personally love what he’s cooked
up this time around, I think people will have quite a hard time digesting it.

How was it working with Andy from King Diamond on your last two releases? I
often think he writes some of the very best or even the best solos in heavy
metal, even today years since Abigail.

Working with Andy is probably the best
choice I’ve ever made in my career. Not only does he have a true passion for
what we’re doing, but over the years we’ve also become sort of good friends,
which definitely helps a lot whilst locked up in a studio for long periods of
time. I do agree he is one of the best guitarists in Heavy Metal but I do feel
he has been evolving and perfecting his skills with every record they’ve done.
I personally think his best work is still to come, but also feel he reached
certain peaks with albums such as “Spiders Lullaby”, “The Graveyard” and
“Conspiracy”, not to mention whathe did for us on “For The God Below”.

Whatever language used or styles, Shining always feels so physical. It is good
to understand lyrics but I feel a lot comes through a sonic, texture level
with your band as well. I mean, we have only so many senses as humans, but
your band seems to have more awareness of all aspects of sound and the psyche
than others afraid to explore more corners.Like , this is a maybe weird
comparison, but The Beatles to me got more interesting when they stopped
covering Chuck Berry (regardless of if it was good or not) and started writing
weird, trippy shit.

Again, whatever a Shining album turns out like its been
written with passion and heart above all else,so therefore you are being
subjected to a genuine work of art rather than something created with the mere
intention to please. You know, there has never been an sort of plan regarding
the direction I’ve been heading musically, and now looking back I feel that
when comparing the albums to each other it’s merely a question of natural
progression and evolution really. Although I will admit it’s been quite
frustrating that many of my lyrics have come out in my native tongue, and
that’s also the reason I decided to publish the “When Prozac No Longer Helps”
book so that people who do not speak Swedish, could get a deeper understanding
of the lyrical themes of these songs.

Människotankens Vägglösa Rum is a bit more straightforward, but one of the
best examples of a song I have heard with bigger production but still steeped
in black metal’s best rebellious historical aspects. Did you produce this
record completely yourself? The guitar tones are admirably evocative.
Elsewhere, I like how the music is even less dependent on servitude to form.
Actually, as you probably already are aware of, it was Euge who started to
write the riffs for this album, and it was also he who made me step out of my
writers block. The first riff he sent me was actually the opening one on said
song, and the middle part I believe, which I then arranged and rewrote here
and there to suit the Shining universe. I did not produce the album myself,
Andy and I did, but if you by produce mean arranged, then yes, I arranged the
whole album, but for once did not write all material myself.

Is it more antagonizing when black metal interviews get super philosophical or
when people ask you dumb questions, like would you do a pro freedom of speech
song with Phil Labonte or something far fetched…does it really just depend
on your mood?

I don’t really feel that any “Black Metal” interview I’ve ever
done has ended up in any philosophical debate, at least not on my part. I just
answer the questions I’m given, however, sometimes being thathonest is not
very good for commercial reasons, but then again, there is a need for that
honesty in order to be able to reach our main targets who in all likelihood
would eventually see through a charade.

Besök Från I(ho)nom ends this record in a powerful way and shows undeniable
sophistication which ought to confound critics who think you are just hellbent
on controversy and perhaps a lesser talent/death wish type. But your art seems
to be quite important to you, or is it more supplemental to your lifestyle,
and a bi-product of soul searching or setting a path for others to follow?
Time is, again, precious in some contexts. Or atleast an expression of energy
in the flow of time.

As explained at the end of my last answer, this “controversy” of ours has not
really been to our advantage as it has resulted in exactly what you’re saying,
with critics and such dismissing Shining as something of a ticking bomb at
times, which has then led to problems in being booked for example, and this is
what I hope the promotional department of our new label will be able to
change, although in all honesty, it’s a long fucking journey. Of course, there
will still be those who refuse to even look in our direction because of said
“controversy” and sometimes, perhaps, a bit misunderstood ideology. But yes,
obviously my art means the world to me, otherwise I hardly think I would have
been able to do what I do for 20 years.

I believe I’ve answered the question of what our goals are about a million
times before and honestly don’t feel a need to do so here and now as time is
running out, although, in glorious duality, time is relative.

When you hear your earliest recordings do you admire your younger self for risking jumping
into a creative lifestyle or do you think it was inevitable? 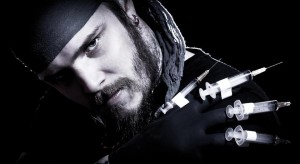