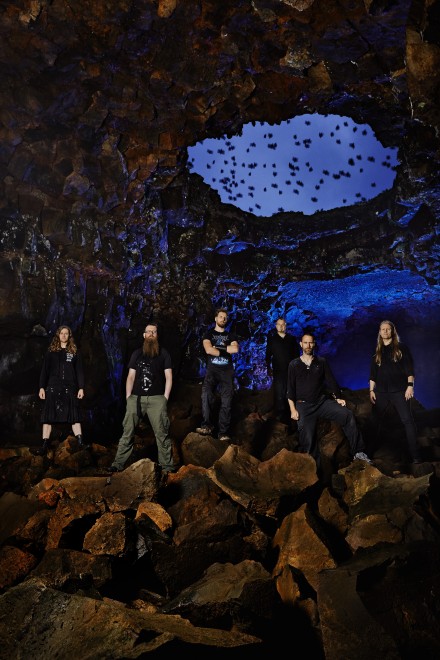 ‘Baldur’ was mostly a Viking story, ‘Börn Loka’ was more about the Norse Gods and the old belief and the new album is a story of Iceland itself…the metal scene is a great pact of people, fans and bands alike. Being a metalhead is probably the safest and most fun thing you can do with your life.- SR

Snæbjörn Ragnarsson, bassist and lyricist of Skálmöld, is one of the more well spoken ambassadors of heavy metal. The Icelandic band have a 3rd voyage Með vættum (Among Vættir in Icelandic) out now on mighty Napalm. The epic feel of this band is something you cannot feign. They are one of the finest modern metal bands with incredible arrangements, hefty and metal/punk heart on sleeve riffing and a sense of self purpose.

The songs on the 3rd record continue the band’s success as a group with strong narrative to their tales. This excerpt is from Wikivikingpedia:

Með vættum tells of a woman, Thorin, born on the north coast of Iceland. During her life, she travels around the island from north, to east, to south, to west. As she does so, she grows older and dies. On each coast she must fight a battle against enemies coming in from sea. She acts as a guardian to the island. In each battle she is aided by a wight, of which there are four traditional versions in Icelandic mythology: bird from the north, dragon from the east, giant from the south, and a bull from the west.

The protagonist was named after the daughter of the band’s keyboard player, Gunnar Ben. Songwriter Snæbjörn likes to use names for the characters which are familiar to him and to which he has some connection.

“No one knows where fate will chime, what your destiny holds…”

The recording sounds to be your heaviest yet, perhaps. Did you want to make the production thicker than before? I think
each album the production suited the songs. Born Loka was a bit thinner and more evil sounding.

Yes I agree, it is the heaviest sounding album so far. It came pretty naturally this time. We had been doing lots of fun
stuff back home, theater show based on the ‘Baldur’ record and of course the Symphony gig. Don’t get me wrong, all these
projects are cool and fun to do but when it all comes down we are a metal band. So after all this we began writing for the
album and it was pretty clear that we wanted to go towards heavier and simpler form of metal again. Just the 6 of us, more
power and no bullshit. And with that came the production. Less layered and more in your face. I think this is our best
sounding album to date.

Can you explain what drew you to write about the Vættir this time around?

Well no, not really. All the stories from the albums take place in the same world, some of old Iceland, Vikings, Norse
Gods and that stuff, mixed with more adventure stuff, Tolkien-esque and even D&D, if you want. ‘Baldur’ was mostly a
Viking story, ‘Börn Loka’ was more about the Norse Gods and the old belief and the new album is a story of Iceland itself.
The Vættir are huge part of the Icelandic myths and I just threw them in the pot with a handful of fiction. Cool
creatures, the Vættir. 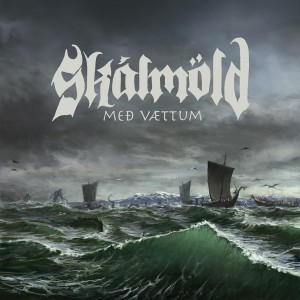 When can I see you in the United States? Also, “Að vori”   is a song for Spring-time? It sounds more heavy and charging into battle than Bambi getting ready to find springtime love, hahaha. And ” Með fuglum”  means “among birds”;? It starts off like doom metal! That is not like little tweety birds? Hahaha. Were you guys very drunk? Be honest, haha.

The Wights (Vættir) are four, the Bird in the North, Dragon in the East, Giant in the South and the Bull in the West. The
story takes on the life span of a female hero named Þórunn Auðna. She is born in the north, and then travels around the
island as she grows older. In each quarter she has to fight from the shore to defend Iceland and she gets help from the Wights. First battle is therefor fought from the north shore in spring time, allied by the Bird in Þórunn’s youth. Second chapter is summertime, she is a young woman and fights from the east with the Dragon. And so forth until she grows old and
dies in the west. So, no Bambi and no Tweeting birds, sorry. There might be a beer or two in it though, as with most good
storytelling. 😉

I got an Icelandic love stave tattooed on my hand since last I spoke to your band!I am Estonian but my desire for happy
friendships and relations in life, as well as my love for SKalmold, inspired me to get an Icelandic symbol. I think it is
a beautiful symbol. Do you draw power and hope from runes or staves in your ownlives? Do you know the band Metsatoll, by
the way?

We are pretty down to earth guys, so we don’t really rely on stuff like that on a daily basis. With that said though some
of the members have runes tattoos and stuff. It gives some kind of strength to know your upbringing and your past. The
runes are such big part of us back into the centuries and all that is just mixed with our blood. They stand for who we are
and where we come from and in that way youcould say we draw power from them. But in a very simple and basic way.Of course we know of Metsatöll and their music. We don’t know the guys though.

“Með drekum” has such an epic feel, really like being among dragons listening to old Metallica for the intro riff, kind of. haha. That sounds like a good party! But yeah, how was it writing this song, a true metal march? Such a headbanging song!

Yeah, that is a fun riff, and quite different from most of our other stuff. My brother, Baldur, wrote most of that song and it just felt right from the beginning. Some songs
your struggle with when writing and arranging but this was one of these songs that just clicked. And it is really fun to
play too and that always helps. I do believe it might become one of our regulars in the future. 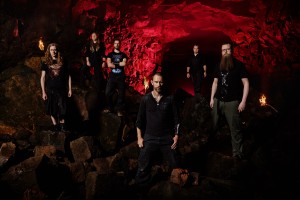 What is a band who you would love to tour with? I always tell Amon Amarth fans to check you guys out because, well…no
offense to them, but I like Skalmold somewhat better because it feels more raw and straight from Jotunheim at times.

I really like AA so that is a huge compliment. We should just do a tour with them, eh? We have been really lucky when it
comes to this and for example this tour we are on now with Eluveitie and Arkona is a total blast. There are such great
bands out there so usually we always have the greatest of times each and every time. But I shall not lie, if someone asked
me to do a tour with Iron Maiden we would most clearly say yes!

That would be so amazing. Was it hard to write a follow up to Born Loka? That release was really loved by fans.

You always tell yourself that the
next album is gonna be easy, but it is not. We tried to not to think about it too much and just went on with what we
always do. I think that you should never compare your stuff to something else. Just do what you think is best. The biggest
failure any artist can do is comparing his or her work to anything, not your earlier work, not expectations of your fans,
nothing. Do your thing, believe in yourself and you will do fine.

Do you think there is still value in teaching mythology
to students or young people across the world as a culture exchange or for the morality tales, even if they also like
science?

I do, but it really matters how it is done. Beliefs, religion and mythology is a huge part of the earths population and
has formed the human race from the very beginning. It is very important to know where your roots lay and where other
people come from. On top of that all these things are so huge in cultural context, something we can never forget. Preaching
is always bad, don’t try to force stuff onto people that disagree with you. But you should always respect others aspects
of life and agree to disagree. Knowledge is key, so teaching is essential.

Hails. Do you think there is too much in the metal scene of bands fighting to prove who is better instead of working together
to make great tours or memories for fans?

I don’t think so. The good thing is that the bullshit never stays alive for very long. The honest people and the good
bands always survive longer than the idiots. As it should be. With that said the metal scene is a great pact of people,
fans and bands alike. Being a metalhead is probably the safest and most fun thing you can do with your life.