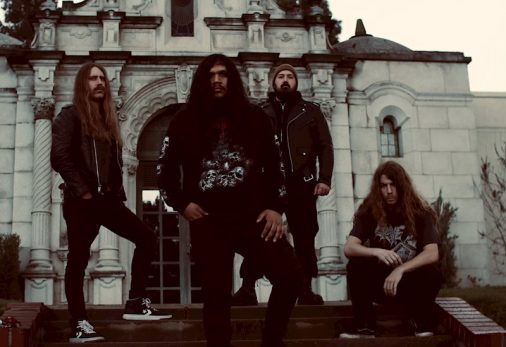 Skeletal Remains have built up a reputation for being a reliable source for some of the best death metal around where old school feel and fury and the ‘raw’ stuff manages to coincide with technical aspects without the scales being tipped. Plenty of stuff your Death or Massacre addict could vibe with and champion while still retaining the attention of people looking for something new, The Entombment Of Chaos is a must hear record for anyone who wants to properly get a grasp on a comprehensive list of the best stuff that came out this year. Despite some upheavals, the current incarnation of the band have released their most essential, confident and potentially career defining release yet! Even if you are not some scholarly metal cleric in a dusty tower, you can casually pick this up and find a killer outlet to both channel rage and have fun.

I spoke to Mike about the new album, coping with Covid, being part of the storied history of death metal, love for the fans and more RIGHT HERE! 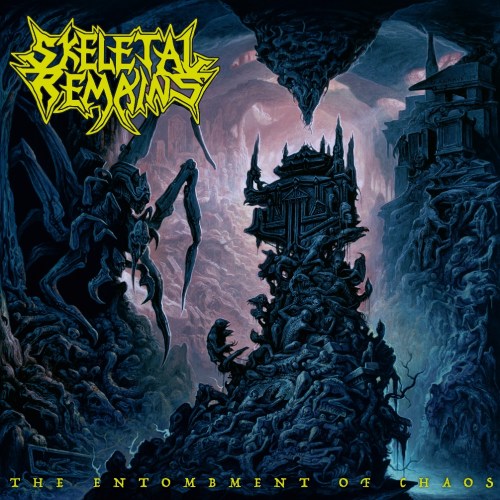 Congrats on the new album! Right after the creepy kind of HP Lovecraft on acid eerie intro it blasts into “Illusive Divinity” and there is no turning back! Very impressed with the musicianship on here. What was the main thing you wanted to accomplish musically with this record?

Mike- Thanks dude!! Glad ya dig it haha. Our main focus was to up our game. We try not to release the same album twice or stray too far away from our sound so with the new music we pushed ourselves to try and create something a little out of our comfort zone without completely abandoning the SR quality. We feel we have accomplished that with this album especially with songs like ‘Tombs of Chaos’ and ‘Eternal Hatred’. Those are some personal favorites of mine.

I have noticed a lot of bands are making shorter songs these days because it is the “age of streaming” or others are making super long 9 minute songs to do the polar opposite haha. Your songs on The Entombment Of Chaos are more like 4-6 minutes, like you are doing what is right for each song. Not too short or too indulgent. I love that cuz it feels less gimmicky. Is that a conscious choice?

We don’t necessarily write songs thinking we absolutely need to hit a certain time mark it just kind of works out that way. Boring answer I know but there really isn’t much thought into the timing as long as it isn’t overly drawn out and boring or so short that it feels like an incomplete song haha.

Ok, this record has some of the most ‘metal’ sounding album names I have heard in awhile. If they ever make a gory CGI movie of Milton’s Paradise Lost I think ‘The Stench of Paradise Burning’ needs to be the music in it. Did you laugh when you came up with the name ‘Dissectasy’? Like, do you ever try to top one another in the band coming up with evil song names like it seems Cannibal Corpse does? Also, I was wondering how you decided on the cover art of a terrifying realm? (Being a metal journalist is great cuz I get to ask things like ‘How did you decide on the giant stone spider monster climbing a pillar of mutated corpses into a ruin? hahaha) \m/

‘Dissectasy’ is a personal favorite of mine haha it’s definitely memorable in my opinion. We do put a little more effort into our lyrics and song titles these days but it’s always a team process. Even if I write the lyrics to a song on my own I still send it off to the guys to decide if we all like it or if there can be a few changes made. Usually we base the art off the music but this time around time was not on our side. We had to work with Seagrave sooner than we’re used to but hey, it’s Dan Seagrave, anything the dude creates is a going to be a genuine masterpiece. A lot of the lyrical ideas were actually based off the artwork this time.

How has it been for the band during Covid? Do you all live somewhat near one another? How do you think this will change the music industry?

Chris and I live about 10-15 minutes apart, Noah is not too close and Pierce lives in Portland Oregon so getting together as a full band to jam is a bit of a challenge. We all do our own thing spending time with our families for the most part only getting together to work on all the merch orders. If things were different with the whole pandemic though I’m sure we’d be on the road as much as possible. It’s definitely going to hurt the industry for a while but music is strength, music is power, music will never go away. When things begin to clear up shows are going to be more packed than ever. We are all aching for the road.

Are you a band who painstakingly write the guitar solos or just kind of let them rip? I was wondering because “Dissectasy” again for example it sounds very passionate and furious in the performance like it erupted from the fingers and a dark soul, haha.

A little of both. Chris’ style is a little more thought out than mine are with him having more musical theory knowledge and my play style leans more towards the improv side. I know absolutely dick when it comes to music theory and I really don’t consider myself much of a solo guy either so yes it was a bitch writing these solos!! Chris’ solos are the star of the album haha.

What is the hardest song on here to play and why? “Unfurling The Casket” seems pretty relentless.

We all agree on Synthetic Impulse being the hardest haha. Drum wise that would be ‘Tortuous Ways to Obliteration’ though. Weird time signature and a shit ton of double pedal kicks. Synthetic though is just a brutal song all around always leaving my arm dead afterwards.

I have been re-reading the great book Choosing Death by Albert Mudrian from Decibel about the history of Death Metal and it is so fascinting to read the ups and downs and see the lives unfold of all these legendary bands like Entombed or Morbid Angel or whoever. How does it feel having this new album arrive close to the ten year anniversary of your band and what have been some of the biggest obstacles you are proud to have overcome or the best parts of being a band?

Personally it’s a huge deal to me. Chris and I were the ones who started the band so to reach the 10 year mark with SR and release new music together, that I feel might be our strongest yet, is a major accomplishment. The band has had its ups and downs just as any other band has but Chris never lost that drive or vision of what we wanted to achieve with SR so when he asked me to rejoin it was an absolute yes. We created this band together; it’s only right that we continue on. I’m so grateful that Noah, Charlie and Pierce stepped up to march along with us through this world of shit and most of all I’m extremely proud of what we have accomplished with this album. We worked our asses off through all kinds of bull shit whether it be within the band or our personal lives. I feel we came out of all this stronger than ever!! I couldn’t ask for a better bunch of crazy assholes to work with!! Sorry got a little too heavy on the feely touchy portion of this question haha. We want to thank all who have purchased the album and most of all thank all who have supported us throughout the years. We couldn’t have gotten this far without each and every one of you. Cheers motherfuckers!!!!