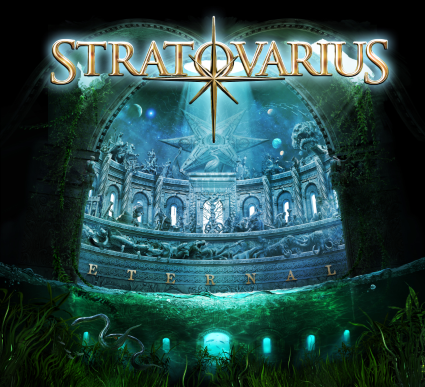 Stratovarius are a legacy band who have given so much over the years. They have played a role in many chapters of power metal through their different, yet all talented, line ups. Eternal is their newest and finds the band emitting blazing power metal epic victories as skillfully as ever. Despite it being their 16th album in the history of the band, Eternal can stand on its’ own alongside classics like Polaris or the shining majesty of Destiny.

I included their most recent previous record Nemesis on my top 5 albums of the year when it was released, but while Eternal is not as perhaps aggressive as that recent statement , it nonetheless is a super worthy anthem that many fans of earlier Stratovarius as well as Matias-era fans will rightfully treasure.

Read an interview with Timo (vocals) BELOW.

Awesome to get to talk to you again. One of my favorite bands. This is a much
different album than Nemesis. That was maybe one of your most aggressive albums
in some ways. This one just glows with its own energy. It reminds me of the
old days of Stratovarius a bit but with many surprises.

Timo Kotipelto: I think you’re right. Some of the songs have fr sure some
reflections of late nineties Stratovarius power metal. Like I said, there’s
also some new stuff. 2015 stuff. Especially when it comes to keyboard sounds.
I don’t know if it is better or worse compared to Nemesis. That’s up to you.

Every one of Stratovarius’ records has something to offer. Since Ronnie James
Dio died I turned more to your band or perhaps a band like Sister Sin or of
course Doro to help fill the void in my life for strong, powerful vocals with
classic metal influences. As an accomplished vocalist already, how do you
approach every album like a new thing?

I think it just happens, especially as you are getting older, that some
years sound better vocal wise compared to some other years. The last two years
my voice has been in very good shaped compared to a few years earlier when I
lost my voice on tour. I was eating something bad and got an infection that
almost ruined my voice completely. For this album I recorded my vocals with
Jani who recorded my vocals for Cain’s Offering. We’ve been working a lot
together so instead of recording the vocals in a hi fi studio, we took the
time we needed. It was a more relaxed atmosphere so I hope you will hear that
on the album. At least to me, the vocals more than any album were the most
relaxed in the whole history of Stratovarius.

You’ve been killing it. Someone like you or even recent King Diamond live
performances who came back from his health stuff. It’s awesome. When “Against
The Wind” first came out and you were introducing Stratovarius fans to your
voice…it was fun to go back and watch that video and compare to now. It
reminds me a bit of the Van Halen “Dreams” video in that it captures a time
really well. Excitement.

I’ve been doing a lot of acoustic gigs in Finland actually the last few
years which helps me to sing the high pitched power metal stuff as well. When
I’m doing those gigs I’m singing much more than in the past. I’m interested in
doing gigs every day, which keeps my vocals up. It’s a different approach and
I can use different colors on those songs, because they are in a different
key. Maybe I’m more relaxed because singing in the past was so high it was
hard to perform as a vocalist. This album there are still a couple of notes
which are very high. But then again there is a lot more variety. It’s more
interesting for me to sing it. 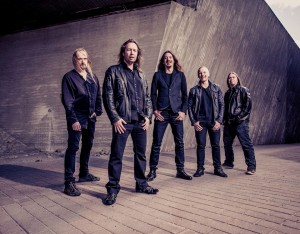 Stratovarius now is really working well as a team. It seems you write these
big choruses almost like second nature sometimes. Like, wow they did another
great one! Matias and the whole band killed it. You wouldn’t be remiss hearing
“My Eternal Dream” and thinking it was already a classic metal anthem and not
a new song.

Well, that’s very nice to hear. I think “My Eternal Dream” is probably
going to be our next single. I also like that song. It’s one of those songs on
this album that does have influences from the old Stratovarius stuff, for
sure. That’s the way it should be. It would be stupid for us to completely
change. We should do what  e are known of but also develop and have evolution.
It’s not so easy but I think with Eternal we’ve managed to do both.

You listen to “Rise Above It” on this and it sounds like it was written to
just dazzle a live crowd. And Jens is on fire on the keys on this album. There
are moments even long time fans will hear and be like ,”wow”!

(laughing) Yes, he did a very good job. I think he spent two months
developing sounds. I was talking to Matias and he received the tracks from
Jens and said there were ,”WAYYYY too many keyboard tracks.” (laughing) So we
had to select which sounds would be heard. But I appreciate Jens attitude.
He’s done many albums in his life but he’s still focusing 100%. I really like
his work.

Your lyrics in “In My Line Of Work” could be like a battle song for musicians.
Just a cool road song. It reminds me a bit of road songs like “Faithfully” by
Journey or Manowar “Return Of The Warlord” or even Bon Jovi “Wanted Dead Or
Alive” where it has a story but you believe in music.

It’s down to Earth lyrics and of course like you said is about touring
musicians and what we do. Quite many people can relate to it if they have a
job that keeps them a long time away from home. The title is a little bit
different from all the other titles but it is the way it should be. Another
song, hmmm…”The Lost Saga” stands out from all the rest because it is about
Vikings. We normally don’t have these kind of Iron Maiden kind of battle and
war lyrics. Normally we don’t have that but this song, we needed it.

Was it hard writing “Man In The Mirror” because people will think of Michael
Jackson?

T: Jens wrote the lyrics for that one and it is his song. So I think
(laughing), I don’t know.

I like the cool and weird techno kind of sounds in the verses from the keys.
It was almost industrial.

T: It was very weird! I think for this song he had much more sounds than you
can hear on the album and Matias as producer thought it was too much. I don’t
know how much he left out.

There were a few songs on Nemesis too that had these modern detours. It’s very
cool. And you have more energy than a lot of other bands in the material
today. Do you think power metal makes us all younger?

I don’t mean that to sound insulting, but I think metal is better to older
legacy bands than some genres. Like, Public Enemy are considered classic hip
hop genre but they still make current records. In metal you have Danzig taking
out Veil of Maya, a much younger band and while some people don’t like the
differences, overall ages are all more accepted.

That’s the way it goes. When I joined this band in 94′, a few years
back…this type of power metal was so untrendy. Metallica Black Album had
come out a few years before and all of my friends, not all but most said not
to join this band because it would never sell anything. I didn’t care. It’s a
little bit the same now. Probably this summer is has been getting up agan but
it was down about five years ago. But I don’t care. Power metal is not gonna
be number one on the charts, but it doesn’t matter. We are trying to compose
the songs and write the lyrics we write. Like you have noticed they might
change the mood album to album. Nemesis was aggressive and this one is
more traditional power metal and melodic, but it doesn’t really matter.
Sometimes you have to think of how to build a chorus so it stands out but the
rest can’t be shit either. If I knew how to write a hit song that’d be great
and I would and be a millionaire, but I’m just a musician who wants to write
and sing this kind of music.