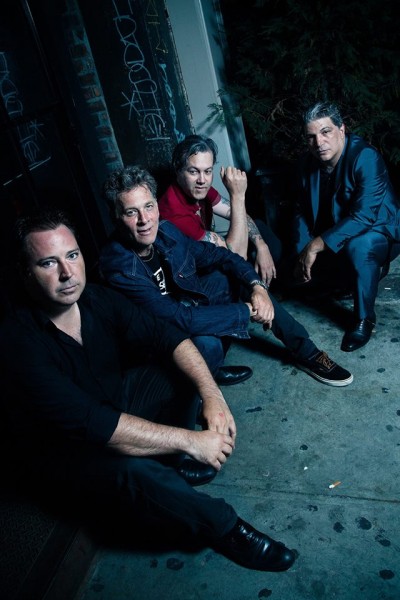 The Noise came on the scene a year or two ago playing a smart mix of noise rock, punk and art rock blended up in a NYC mixer. With Googy of The Misfits’ Walk Among Us-era on vocals and a powerful sound, it’s time this band got some more stateside shine (the Europeans have already started digging them). The Noise are touring Germany and Switzerland next month, so I thought this was a great time to briefly check in with guitarist Brian Goss (ex-Dripping Goss, Warzone, The Warm Jets) to see how it feels to have things picking up speed for this rowdy, legit project of true NYC vets.

For a quick introductory conversation see BELOW.

How’s the band going? WHat have you been up to? Lots of craziness?

Going well. The new release just came out February 27th on Rookie Records in Germany, and its been getting great response from a lot of radio play. We are talking to DR records in California for a cassette release distributed through Burger Records as well. We will head out there in July for a short run up the West Coast. We just played St. Paddys Day at Bowery Electric, it was out of control.

What can you tell us about the upcoming Euro tour?

We have been rehearsing like crazy for the upcoming tour that starts April 14. We were in Germany last October touring on the single “East of First” on Rookie Records. It was our first time through with the band, we played a bunch of squats, clubs and some youth centers. This time rooms are a little bigger and we are playing more shows and branching out into Switzerland this time. We do a couple Misfits songs for good measure, even though Arthur doesn’t like to “hang his hat” as he says, in having been in The Misfits.

Anything on the horizon video or record wise we can look forward to?

We are working on the next video for “Talk To The Man”, the first single off the record. Jean Luc DaFlake is directing again. We have been writing new songs to fill out the set because the promoters want us to play much longer than the last tour. So a follow up record is showing itself as we move along.

How did this band of NY area guys come together, for those who don’t know how you all met?

I have known George the bass player since we were kids, back during his Hell’s Kitchen and my Warm Jets days. It’s really his underground railroad we are riding through Germany, as he had been touring there constantly for the last 15 years with his now defunct band Aluminum Babe.

I met Arthur about 15 years ago. I designed a cover for one of his band’s CD’s and played on some songs.

The Noise’s original drummer was Billy Ficca from Television. I thought Billy’s history would level out Arthur’s ego because he pre dates him as a drummer in punk rock history. A “Billy Preston” to the Beatles, if you will, so everyone would just stay cool. Billy was out there, jazz head, I loved his style, Avant-garde, but as we evolved we needed a bit more solid playing.

Dave Blackshire eventuly filled the slot. I knew Dave from when he ran Lit Lounge and I DJ’d there. An amazing drummer that sings background vocals like an angel and writes great songs. Its a solid line up with all bases covered to be a truly great band. We work at it every day.