Interview: The Return of MARES OF THRACE with ‘The Exile’. 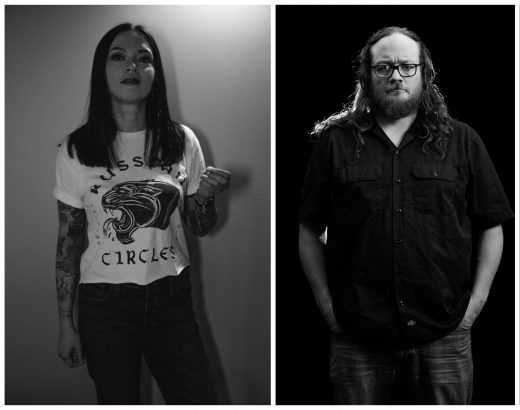 J’adore The Exile! The new album (links here) from the latest incarnation of stompers Mares Of Thrace is a long hoped for victory! Blackguard’s Storm and this Mares record are both recent Canada-blessed releases that somehow took nearly as long as Chinese Democracy to arrive. What does it mean, hmmm? I don’t think anything (but all were worth the wait).

The chemistry of the performances and captured takes between vocalist/guitarist Thérèse Lanz add new drummer/bassist Casey Rogers is insane. Be prepared for one of the most satisfying and Earth moving heavy musical expressions of energy in human memory.

1. How are you today? I came home from a long day of work to find mouse shit on my stove, so I could not make my vegan pizza in the oven. Is Mouse pee vegan once they part with it? Anyway, where are you located nowadays? What’s up, yo!!! Do you agree with Steve Albini’s recent take that Juggalos are less annoying than Deadheads? Are Deadheads less annoying than black metal fans at least? The world wants to know.

I think mouse pee is vegan so long as the mouse isn’t harmed in the extraction of the pee, and the pee was released voluntarily. (I’m paraphrasing a punk kid I knew who answered the same question about a certain human bodily fluid.)

I’m currently located in Halifax, NS, but in a few weeks I’m relocating to my hometown of Calgary, which means we don’t have to be a long distance band anymore, which is great, because long distance anything sucks.

ICP has been very pro-trans and anti-racist lately, and have publicly recanted and apologized for the dumb shit they’ve said in the past, MUCH more sincerely than the boilerplate bullshit I’ve seen elsewhere in that regard, and one of them dressed up in a fursuit to support his furry daughter, so I’m actually pretty pro ICP these days. Honestly, if I had to rank those demographics from least to most annoying, it would go Juggalos > black metal fans > Deadheads.

2. The whole release is killer but the center of it, the middle tracks…those really nailed me the hardest. “Mortal Quarry” into “In All Her Glory” really pulls you in and kick ass so hard where a lot of records sort of drag at the center. Was it hard to decide the track order for this?

I’m so delighted you like it! Mildly embarrassing confession: the track order is the order I wrote the songs in, chronologically. It just made sense! It was a logical progression!

3. Ha! Life has changed and moved ever forward between The Pilgramage and The Exile. Can you even possibly summarize all that you have been through that shaped your perspectives between? Was it daunting to make this third record or liberating to be back at it? With so much time having passed, was it hard to choose how to “say everything” you wanted to say on this?

So much shit happened between now and then, multiple country/city moves, family deaths, a career change, massive world changing political events. I’m a completely different person than the dumbass who wrote The Pilgrimage and I just want to reach through a time travel portal and shake her. At first it was EXTREMELY daunting– I was like “do I still remember how to write evil riffs?” But as it turns out, writing evil riffs is like riding a bike. And I definitely didn’t manage to say everything I wanted to say on The Exile, which is why I already have a couple tracks of record #4 written!

4. So what happened with you and WoTC? Weren’t you potentially doing something with them? I have been a Dragonlance maniac since the 80s. It has been so awesome to see you grow as a visual artist, especially since most of it is nerdy! Ha. Of course everyone loves No Dawn For Men.

Thank you so much! I did have someone at Wizards of the Coast (that’s the publisher of both Dungeons and Dragons, and Magic: The Gathering) reach out to me about working for them as an artist. I currently have a really sweet situation (I’m freelance now and I can tour pretty much whenever) and I’m not in a big rush to give that up to go back to 9-to-5. But we’ll see what happens after I’ve given this record the live attention it deserves.

5. So Casey Rogers engineered as well? How fun was the chemistry of doing it that way? Drummers and bassists can be a pain in the ass in the studio, hahaha. At least no one else can be blamed if Casey didn’t like the rhythm sounds, haha. But for real, it sounds ginormous and intense.

Casey is a mutant genius who is good at everything, and making this record was probably the most fun, painless, stress-free, enjoyable recording process ever. Casey instinctively understands what I’m trying to get across with riffs and song structures. I had mixed feelings about introducing a bass at first– it just didn’t seem Mares of Thracey– but it really grew on me and I think those songs would now sound naked without the basslines. He comes from a much more prog-metal place than I do– I come from whatever place is the polar opposite of prog– but I like letting collaborators do their thing, y’know? I like people bringing ideas to the table that wouldn’t have occurred to me.

6. Urghh, “The Thread That Will Unravel You” is so gooood though! It sounds during the intro like non hologram, honest to fucking God Ronnie James Dio is about to swoop in over the riff. Of course Dio being God, that was redundant. I should have just said honest to Ronnie? This is not to say I am disappointed that the bad ass screams are there instead of Dio. This is a two part question. Did you know this was a hard track to follow and so put it last and would you be mad if someone made a cheezy hologram of your band after you depart the mortal coil. Which is obviously purely hypothetical because you are already an immortal legend of rock.

Hah!
1) As I said earlier, alas, I put this song last because it was the last one I wrote before the arbitrary cutoff date (there are a couple real bangers that are going to have to be on record #4)

2) Can I tell you a Dungeons and Dragons related story? We were playing D&D and in the climactic final battle of the campaign, a dragon showed up and started nuking our assembled armies. Eventually we figured out that it wasn’t a real dragon but an illusory one (the spell Phantasmal Killer) so my friend and party member began referring to it as Holographic 2Pac. I suppose this is my way of saying, when I croak, I want holographic versions of me everywhere, constantly, but they have to depict me as a seminal West Coast gangsta rapper and also a draconic archmage. AT THE SAME TIME.

7. Compelling. We will get our people on it. Was the cover art inspired by the many vast oceans of time fans have had to cross while we awaited this epic release? My arms are tired from rowing. But it was worth it! Sorry, Amon Amarth (they recently put out a song about rowing, ignore me). MoT now rule the choppy seas! Um, what are you looking forward to most about the rest of the year?

Sorry! I’ll affix an outboard motor to the longship next time! It’s a very ocean-themed record. I’ve spent most of my life in very “mid-continent prairie” cities, and right now I can almost see the ocean from my apartment window, and it’s the most beautiful, alluring, dangerous, frightening, alienating, comforting, mystical thing ever. It’s a metaphor for a lot of things– my friend the refugee from Syria, who track #1 is about, said the sea only made her think of loss now, and that really stuck with me.

Honestly the main thing I’m looking forward to is COVID numbers going down and maybe booster #4 getting rolled out and being able to play live again without fear of accidentally killing people’s elderly parents with my germy saliva. 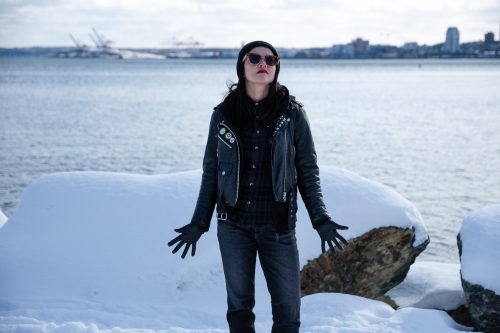