MORGAN Y. EVANS: You’ve finished your newest record DEATH DEALER, correct? What can you tell us about it? Were you ever a fan of that Frank Frazetta character of the same name (Danzig helped make a comic of it)? It’s…really metal. How does this new record represent where you are now as a band? What was the recording process like?

Frank TWWK: Finally after 2 years we’ve put together 11 new songs and compiled it into 41 minutes of everything we’ve always wanted to do as a band. No disrespect to the older members we worked with, but we rarely saw eye to eye when writing with our last record. “Death Dealer” is a blend of ALL styles of metal and really has something for everyone! Some songs are really heavy, thrashy, singy, catchy. All the components to make a memorable record. As for Frank Frazetta… A fan recently brought it to our attention. Never heard of it until then.

MYE: You told me in an email that you recently finished your first Canadian tour for The World We Knew. How did that go and were the fans cool up there?

Frank TWWK: Canada was interesting for us. It was the first time in a while where we felt out of our element. In Quebec, where French-Canadian is the primary language, it’s very hard to communicate with the fans. We just tried to put our all into the live show to let them know we weren’t fucking around! We are still very un-known up there though. I really hope to go back up there and give it another chance before 2011 is over. 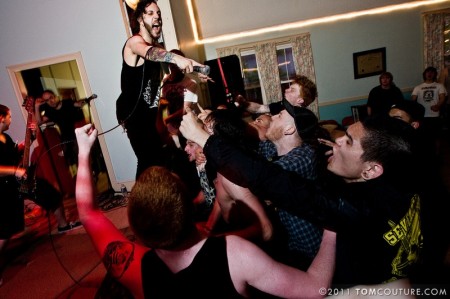 MYE: Your band has a very volatile but non-cliché stage presence. You also really have
managed to somehow kick it up a notch live. I saw you two years in a row at Stillborn
Fest and not that the first year was mellow by any means but it feels like this recent
December when I saw you the energy was really explosive. Is the fire for this project
growing over time as it becomes a deeper part of you?

Frank TWWK: Like I mentioned before, we recently got a few new members (Justin; Guitar, Jorge; Drums, Jesse; Bass). Since we started writing new songs, meshing as musicians, and becoming good friends, things just seem to click better. We’ve always been a metal band, but we try to portray the hardcore styled live show where we are pretty damn reckless! I get bored watching metal bands look mad or upset on stage all the time, so why not turn the energy up to 11 and really give the crowd a show, right?

MYE: I liked the band name a lot when I heard of you. I can’t help but feel a sense of
nostalgia and connection to my own bittersweet sense of loss in life. Memories that are too personal or complex to explain to others and do it justice. Could you elaborate
on what the name of your group means to you?

Frank TWWK: I’ll be honest… When this band started, we just grabbed the song out of a Frank Sinatra catalogue because it didn’t sound cliche as a lot of other bands in the genre do. Later on, it grew on me in the sense where this could very well be my only calling in life; the world that I know! If this doesn’t work out for me, I promised myself I would start professional wrestling. It’s like my mistress.

MYE: Frank, you also book shows as a booking agent, correct? How’d you get involved in the booking side of things? Is it tiring or another way to give back to the scene?

Frank TWWK: Booking tours for TWWK was something I’ve been doing since this band started to become serious. If their is one thing I’ve learned over the 6 years being in the music industry is that you’ll NEVER get anywhere if you sit on your ass waiting for things to be handed to you. In 2005, no one knew who we were, so I networked my ass off and found people who potentially gave a shit. Thankfully I’ve built a good database, lots of long time friends/promoters, and quite the reputation for TWWK as a non-stop touring act. The downside to this situation is always having to make sure things run smoothly with your tours. Not everything goes as planned, but that’s a whole different story, haha.

MYE: People say metalcore is more lowest common denominator than ever with regionalism being replaced by Youtube clips, more violence and mind numbing reliance on breakdowns. You have some killer breakdowns but aren’t a cliché band to my ears. What do you think about the state of crossover hardcore and what you’ve learned from touring?

Frank TWWK: I won’t get too deep into details, but just recently we were told by someone in the industry that we should become heavier to get further in our career. I started going to shows when I was 13, and if you told me that putting 12 breakdowns in each song would make my band huge, I would have laughed in your face. Don’t get me wrong…I definitely enjoy heaviness, but we all agreed that we’d never change our style because someone else decided it was “the hyped thing” to do. Our songs have structure, melody, and heaviness just like the greats in metalcore; Unearth, As I Lay Dying, Bleeding Through, etc.

MYE: Yeah, I love how As I Lay Dying have evolved. Who are some bands that inspired you to get out there and do what you do? For myself, one band was certainly Sick Of It All. I am a mainly melodic singer and only occasional shouter/screamer, but a band like Sick of It All taught me about persevering and following your vision at a younger, troubled age. That kind of shit sticks with you down the line, no matter what genre or path you follow in life or a career or as an artist.

Frank TWWK: I mentioned a few bands in the last answer that were definitely big influences, but bands like Korn, Glassjaw and Slipknot really paved the way to actually making this the life I wanted to live. I worshiped those bands! When it comes to the underground, bands like Hatebreed, Poison The Well and Most Precious Blood set the bar real high!

MYE: Can you tell us some of the themes of “Death Dealer” and what makes happiest about the end result?

Frank TWWK: As a vocalist and lyricist, I’ve grown greatly! I wasn’t truly happy with the way I sounded on the last few records, so I feel like touring non-stop has finally helped me grow into the vocalist I’ve always wanted to be. Doesn’t mean that there isn’t room for improvement though. I need to stay in shape instead of sitting on the damn couch all the time while I’m home! With the exception of a few songs, lyrically I wrote a whole lot about being the underdog in this scene. Even after 6 years, very few people (besides our fans) take us seriously. Sometimes it’s disheartening, but we’ve been fighting for our music for a long time, so the great memories will continue to pour in regardless of who’s behind us.

MYE: What are you most looking forward to about the Mosh It Up tour you are taking part in come this June with Molotov Solution, Legend and Betrayal?

Frank TWWK: We’ve been friends with most of these bands for quite some time, so besides the fun shows we’ll play, we’re going to have some insane times with some crazy dudes!