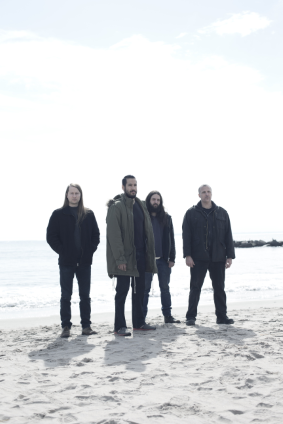 The gold idea comes from alchemy; gold is a higher level of being. Most of the record deals with death and transformation, changing state, moving from a lower state to a higher state. – Mike Hill

While the entertainment industry worries about how to cash in on holograms of Michael Jackson, some people in rock are steadfast and focused on creating art with merit. Tombs represent an economy of thought, motion and practice, a sort of way of being. The band’s new album Savage Gold (Relapse), is the latest in a string of truly moving works of extreme sonic art. As harsh at times as being caught in a storm and as sentimental as a music box at others, the band are evocative and beyond easy categorization. 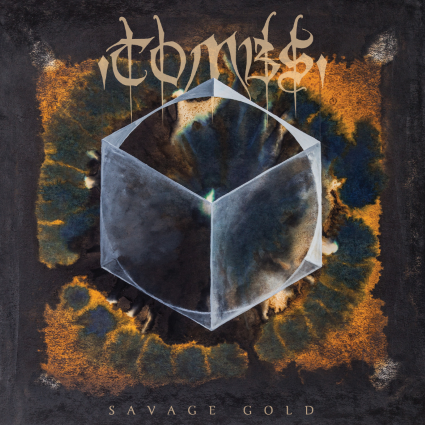 I love the controlled chaos of Tombs, the sense of harnessing this huge energy but also times when it is patient and building. A song like the slower “Severed Lives” is a perfect example. Did you have a particular direction or plan for this album as a follow up to your preceeding works or is each record like a moment unto itself or a different planet in the Tombs’ galaxy, so to speak?

Mike Hill: I think each record is a moment in itself. I’m always writing material; I never stop unless we’re on tour, but even then, I’m working out ideas to some extent. Each record reflects a period of time in our lives. I never set out with an objective; the only goal is to continue writing and create something strong.

I know it is supposed to be against the rules to ask bands this, but can you discuss the album’s title Savage Gold? Is it a comment on where we place value in society? Fool’s gold, if you will? Or a statement like the film Blood Diamond?

We discuss the album titles a bit, but since I write the lyrics, the job of coming up with a title sits on my shoulders.  The gold idea comes from alchemy; gold is a higher level of being. Most of the record deals with death and transformation, changing state, moving from a lower state to a higher state.

‘Portraits” and many of your songs have these beautiful melodies embedded in the ferocity. It makes it more gripping. Like when you open the intro riff into half time chords for a minute in that song, the shift really sets up your subsequent blast into the faster screamed verse about ‘ego slips away”, etc. The band seems like it is really based a lot on feel. Or am I wrong and this shit is all super thought out and structured rather than sort of jammed and then organized?

There is a lot of feel in the writing process. About 80% of the song is written at my apartment and the rest is sort of organized and arranged in practice.

I finally first saw you guys live at the Union Transfer show that was Baroness’ first show back. What an amazing night that was. How did it feel to play that event (despite the sound difficulty at first that night)?

I love John Baizely; aside from being a brilliant musician and artist, he’s a beautiful person. I feel fortunate to count him as a friend. It was a real honor to be asked to play that show and it meant a lot to me for us to be part of it. 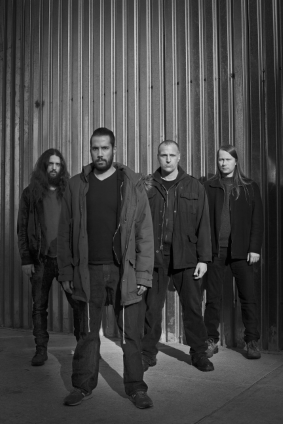 I love “Thanatos”. It almost reminds me of if Selfless era Godflesh (my favorite) was black metal! Fuckin sweet! The production on this album is really well realized. Do you think you realized your vision?

I think we came really, really close. There is always something that I feel can be improved, but I feel satisfied with the record. It’s time to move on to the next one now!!

Your early stuff on Fear Is The Weapon still holds up as well as the new stuff, I think. “Course of Empire” in particular has some very cool morose and almost shoegaze or cold sounds in it. It always reminds me of Joy Division for some reason. One thing I like about Tombs is it seems like the mood is more important than the execution of a particular style you are married to, though the band still manages to have a sound. Know what I mean?

It’s really cool that you see it that way because that’s exactly what my objective is. Mood and emotion is primary to me. At heart, I’m a metal head; even the punk and hardcore that I like is based in a metallic sound, so there will always be that filter through which everything passes.

“Deathtripper” is of course the shit. Is that a comment on adrenaline junkies or people kind of drawn to the flame, so to speak? The vocals kind of remind me of Bauhaus. It also made me think of how some people can be death tripping like Charles Manson but others can kind of have ego death and come back renewed or like…the Tibetan book of the Dead. Grounded in understanding and acceptance or deep contemplation of mortality as part of life.

Ironically, that song didn’t really have a lot of research associated with it. I was looking through my journals and found the lyrics in a pretty much complete form. At the time, I had a drum machine demo of the song and the lyrics fit so well. The writing was from a journal that I kept in the late 90’s. It was a very dark time for me. The lyrics made me think about loneliness and feeling like life was running out. There was also a very physical sense to it as well. I was living in Boston at the time and I would make this drive between Allston and Mission Hill late at night. “Deathtripper” reminds of of that time.

How was it working with Rutan on this album? People associate him mainly with death metal, but he is very versatile. For example, the stuff he did with Ephel Duath also, like your band, requires the ability to capture multi-faceted music well. I think you pairing with him is fantastic.

Rutan is the man! We had a great time working with him. I’ve admired his work for a long time.

How is this the album that represents Tombs best in 2014? Rather, how are these songs symbollic of your lives at this time?

I feel like we have ascended to a higher level with this record in respect to our ability as songwriters and players.