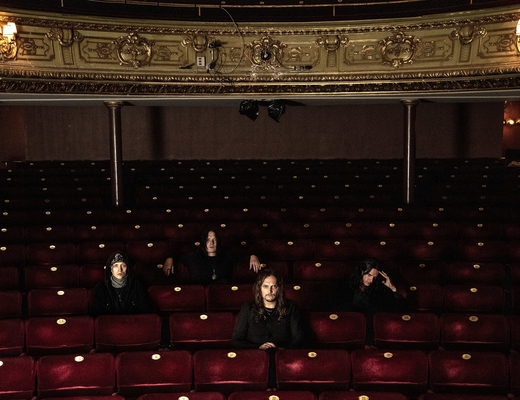 “Going dark” in theatre speak means a show is closed down whereas it is “lit” when the production is up and running. Some things manage to be both lit and embrace the dark at the same time (Kerli’s recent confident electro-spooky wub wubbing  “Where The Dark Things Are” track from the awesome as hell Shadow Works album comes to mind). Tribulation, one of the most darkly theatrical and grandiose yet no nonsense musical bands in any era of metal, certainly also could count as both “lit” and very dark, indeed. You might even call them creatures of the night.

Now Tribulation are unveiling their first official live album, the marvelous new Alive & Dead at Södra Teatern. This is a major moment for this acclaimed band from Sweden who have wowed so many with their deep dives into the inner fears of humanity.  Invited by ex-Nirvana 2002 vocalist and curator Orvar Säfström, who served as master of ceremonies, Tribulation’s first-ever Södra Teatern (Southern Theatre) main hall gig was a very special night of black celebration.

Founding member Adam Zaars took the time to speak to me through mists of swirling terror (actually through email) to attempt to illumine what the chemistry, moment and import of this release means to the frighteningly talented band behind it. Read MORE below.

Your band has had such an organic and cool development, each release exploring further down the rabbit hole or dark path of what this band can be. It has been really thrilling to witness as an outsider. Do you feel like band’s get stuck too often and forget that they can make the art they really want to or even (gasp) evolve? I just remember the first time I heard “Melancholia” it was such a breath of fresh air…er, dusty corpse reeking air?

I think bands are in it for many different reasons, and I don’t see that one is more accurate or valid than the other. Some bands, like us, see what they do as art in one way or another and if you do, I guess you’re more likely to benefit from not getting stuck in the same niche or viewing everything you do from that niche’s perspective. But there are many ways of making art. I think it comes down to the individuals in the band and whatever works for them. I can admire bands that “get stuck” and thoroughly carve out their own niche and explore it and, hopefully, perfect it as well. It all depends on what you want to do, and what kind of goals you have. We’ve more or less let Tribulation develop in its own way without any particular goal, art for art’s sake as we’ve said from the beginning. I see both benefits and disadvantages with this approach, but it’s the approach we have, and I don’t think we can change that. Let’s find out what happens in the future, I honestly don’t know and that’s always pretty exciting.

Totally. With my Walking Bombs albums (my band) I never know what it will be but it will always be “me”. So I can relate. So how did this amazing new release come about? Alive & Dead At Södra Teatern is going to be major. Am I correct you were invited by ex-Nirvana 2002 vocalist and curator Orvar Säfström to the venue? I do not know about this venue but it sounds like a prestigious place. And there is also a DVD?

Let’s hope it does well! No, we invited him actually. We wanted to have a host for the evening because of the occasion, and I even think we invited him before we had decided to film and record the thing. We know him from before and luckily he agreed to do it! We were planning a Stockholm show when we got the offer to play at Södra Teatern, and while we were a bit hesitant to begin with because of the seated audience we decided to do it anyway. We’ve been planning to do a show in two acts like this one for a while now, and this just happened to be a great opportunity for us to do that, it being an old theatre and all. Then we also took the opportunity to record it, but that was when everything was done, more or less. We played a few songs that we’ve never played before, so that was a bit nervous, but it went surprisingly well in the end.

I bet that was indeed slightly nervy for the band! A bold move but very cool! Do you feel like the live setting, especially for some of the music you play, allows for the songs to reveal more to you and kind of part or cast more shadows than even when you were writing them? I just know that playing live can create a particular adrenaline fueled gnosis sometimes or open the third eye even wider.

Playing metal wouldn’t be my go-to method for opening the Ajna chakra but I’m happy if it works for you, but the songs do live a life of their own in a way, though in highly controlled forms. It’s almost like they never get finished. You record them at a certain moment in time and cement them in a way, but if you play them live, they live on and never quite take on a completely solid form.

How did you know this was the concert to use for your first live album? That is kind of a lot of pressure. It must obviously meet your standards. Or perhaps each concert is sort of part of a picture. So another live album down the road is also not out of the question?

We found ourselves in a position where we had the opportunity to record a pretty special show and we grabbed it. We also felt like we wanted to give the fans something like this since there’s not much good footage out there and I know what it’s like to be fan, especially if you’re a teenager, you really want something like this. Hopefully people will appreciate it! This is very much a Down Below live album, so there might absolutely be more in the future!

Do you remember your first live concert clearly? Was it in Sweden? I feel like if some little kid saw Tribulation for their first ever concert they would say ,”Wow, mommy. Maybe rock n’ roll really is scary?” hahaha. Also, is any music currently inspiring you? I discovered Vila from Toronto recently on Bandcamp, which means like a nymph that makes dishonest people starve, and the music is dark and beautiful. So that was inspiring.

Embarrassingly enough, I don’t quite remember which the very first one was at the moment. There are a few contenders and they all took place in the town where it all started, Arvika. So, no, not very clearly at all. It would have either happened on a place called Ritz, or possibly Arken at that time, or it happened on the fine festival that used to be arranged in Arvika every year, not the famous synth and goth Arvikafestivalen, but the smaller but more intimate Viksholmsfestivalen. We played a bunch of parties and similar stuff in Arvika in the early days as well. We also got to Uppsala to play with Katalysator (more or less the In Solitude guys) and Degial and similar bands a few times. This is around 2004-2005 I suppose. I think we might look scarier nowadays actually, hehe. Yes, music is always an inspiration. At the moment I mostly listen to Atrium Carceri!

Down Below was a powerful record and established you will continue to do what you want. I can’t believe it has already been out for almost two years. Are you working on the follow up or going to take a little longer to let new ideas gestate?

I agree, it doesn’t seem that long! We are working on the follow up, indeed. More news about that soon!

Yes, and I don’t mean that I am sick of it or anything! I want more! Haha. But time flies. Do you have any big plans for Halloween this year? We still make a very big deal out of it in America obviously and many people want to celebrate it pretty much every day, haha. Is it true you have some shows with Ghost coming up before the end of the year, I think I saw on Instagram? I don’t think I made that up.

Since I didn’t have the time to answer this interview until now, Halloween is in the past. Since Sweden used to be, and still for most part is (though not officially) a Christian country we’ve been celebrating “All Saint’s Day” on November 1:st (on the day after the eve, obviously) as well as ”All Soul’s Day” that’s on different days every year. Particularly All Soul’s Day is still important for people and is one of the days when secular Swedes all of a sudden become just a little bit religious and turn to temporary ancestor worship. It’s beautiful to go to the cemetery on that night with candles absolutely everywhere. Let’s hope it continues! We had an autumn “blot” in Sweden in the Viking era, and probably earlier as well I suppose, but we haven’t had the Anglo-Saxon Samhain celebration going via North America to Sweden until the last decade or so. It’s big now especially with our thoroughly anglicized, or even Americanized, kids. I don’t really mind since I like the holiday after spending a few Octobers in North America and like many years before I watched a lot of horror movies all of October. Trivial? Yes, but entertaining. Yes, we have a European tour with Ghost coming up in about a week.

People get attached to art that speaks to them. Fans can be a blessing but also sometimes intense. I am sure you feel grateful for them but also do you feel like you owe them anything or create first and foremost for your own expression?

We’ve always created and evolved without thinking about the fans. We can’t start thinking about what other people may or may not think about it, that would be horrible for us. No, I don’t think we owe fans anything. We make music, and if they like it, they can buy it or listen to it for free basically anywhere. We might owe particular fans something though, but not “fans” as a generalized group of people. 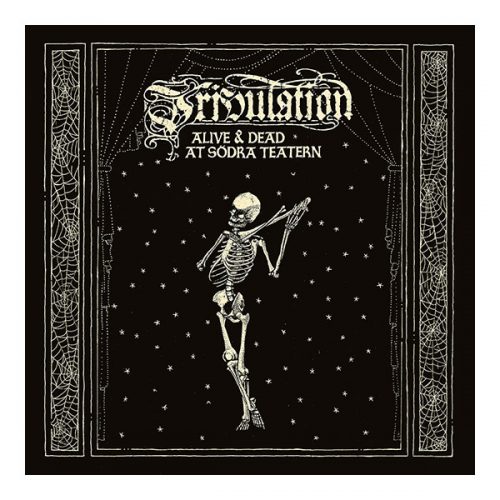