Formerly of Alaska and relocated to the mighty state of Texas (they must’ve thawed out fast!), Turbid North are turning head banging heads at impossible angles! Their rapidly expanding popularity (well deserved after years of hard work) is quickly multiplying thanks to Trevor from Unearth releasing their ferocious death metal LP “Orogeny” on IRONCLAD RECORDINGS (before even seeing the band live)! This 4th Of July weekend let’s tip our hats to this great, genuine and mercilessly heavy band since Turbid North are a great example of American Metal that measures up to anything on the world metal stage.

Click HERE to read the impressive story of “Orogeny” and get ready to flip out over one of 2011’s best!

MORGAN Y. EVANS: Hey, man. What’s going on today? What are you up to?

NICK FORKEL (guitarist/vocalist): We’re back at home at the moment, doing the ole’ 9 to 5.  We just returned from a week long run that was great, had some good times and made a lot of friends along the way.

MYE: Can you tell people that don’t know a little history on the band? You
have a pretty winding journey from point A to B! I am sure you are sick of
jokes about you guys thawing out during the move from Alaska to Texas, so
I’ll let you guys tell it in your own words.

NF: After being in a band for a few years we knew that we had to get out of
Alaska if we wanted the band to go anywhere.  Most bands who leave Alaska
usually go to Portland or somewhere northwest, to be closer to home. We
did the exact opposite and based on the advice of some fellow musicians,
decided to give Texas a shot.  We all quit our jobs and made the 3,000
mile drive, which was an amazing experience.  We were all young and had
no idea what to expect when we got here, the first thing we did was
immediately start to play shows around DFW.  Eventually we lost our
original singer and bass player, but were lucky enough to acquire the
missing pieces to the puzzle in Chris (bassist) and Brian (singer). We’ve
been hard at work ever since and eventually started to get some
recognition for it.

MYE: Let’s talk about how you got involved with Ironclad Recordings. I was psyched when I heard they were going to put out “Orogeny”. Trevor really seems to keep his ear to the ground or support long-standing bands and it is cool you are showcased in such a light as a hard working band. I love Unearth. My old band DIVEST played with them at a small club in Poughkeepsie, NY years ago and it was so bad ass. Also, can you talk about the album title? It’s a great name for your record!

NF: We had been pushing the album to a bunch of labels when our friend Nick from The Destro gave Trevor a copy.  He got in contact with us and told us he loved the music and asked if we were interested in working with Ironclad.  The mere fact that he wanted to sign the band based solely on hearing the album, he’d never seen us, was huge because that told us he believed in the music first and foremost.  Trevor’s a hard working guy and he saw that we had that same mentality.  We feel very fortunate to have the opportunity to be working with him and Ironclad.

It took a while before the name “Orogeny” came up, which basically is the
natural process of forming a mountain.  We called the album that because
it reflects the hard work we do and what we’ve been through, so it became the
vibe while we were writing the songs.  We’ve been building this Turbid
mountain for a long time now.

MYE: Hmmm…How have the songs on OROGENY grown with you since the initial writing? You’ve played them a lot now but they are very powerful.

NF: We wrote these songs a year and a half ago, so we’ve been playing them for awhile now but they’re still very powerful to us and still fun to play
live.  The way I look at it is we’ve built the foundation with the songs on “Orogeny”, and at the time we had just gotten a new singer, so we didn’t
really know what the band was going to sound like.  This is the direction we went with.

MYE: I see you are playing a show with The Destro, a reunion show for them. Very cool. I hadn’t heard anything from them in awhile and didn’t know
they’d broken up in the first place. Do you expect it to be an insane night?

NF: We’re very excited!  They’ve actually been on a hiatus for a while, but are getting back to writing and playing again, which is great because we love those guys.  There’s also some other great local bands, our buds in Vaste Buria and Burndown are playing, so it’s gonna be a killer night! 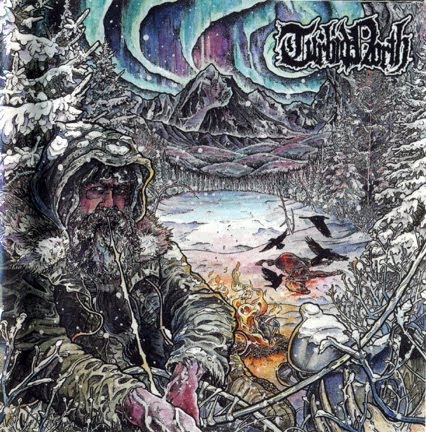 MYE: Does the unique combination of Alaskans, Texans and Englishman give you an edge when it comes to out partying other bands? You guys should play a
show with Victory Record’s awesome Blackguard. They are pretty insane Canadians who tear it up royally.

NF: We’re all definitely beer connoisseurs, so I think we can hold our own against most bands although we have yet to party with any Canadians.
We’d love to get up to Canada and give’r!

MYE:  Let’s talk about what got you into metal. I have been listening to some older Earache releases and thinking back on when I was just discovering
TERRORIZER Magazine and METAL MANIACS and just sort of stopped myself and thought,  “Wow. I’ve been singing in bands and reading and writing
about bands for almost twenty years now, since I was fifteen!” It sneaks up on you! But also I can’t believe I haven’t gone blind or deaf yet and how much metal is crammed into my skull. For you guys, can you talk about any formative experiences or records that were important to inspiring you to do this?

NF: I was lucky enough to grow up in an 80’s metal household.  I can remember
listening to Motley Crue at the age of 5 or something, so I was very much raised on rock and metal.  I saw Kiss when I was 12 and it changed my life.  Loud guitars and this crazy stage show…after it was over I knew that I wanted to play guitar and be in a band.  Another big turning point was when I went out and bought a cassette of Metallica’s “Ride the Lightning”, my first real taste of Metallica.  I listened to it for days and days, that opened the door to the heavier music. I’ll be doing this shit when I’m 80, probably deaf and blind by then too.

MYE: “Ride The Lightning” is simply brilliant. Let’s talk about the scene in Ft. Worth. My cousins have a band called Stew! in Dallas and I visited them last year. We saw Lightning Bolt play and everyone was fucking awesome and treated me like gold. I had heard so much about Austin but I think Dallas and Ft.Worth are underrated. I had a fuckin’ blast there.

NF: DFW has an amazing metal scene, tons of venues, lots of great bands and
many good times to be had.  It’s like a big family here, southern
hospitality at its finest.  When we first started playing around DFW,
bands and the locals were so generous to us, it really helped us grow as a
band.  There’s a lot of great death metal bands coming out of Ft. Worth,
so it’s exciting to be part of it all.

MYE: What is the most rewarding part of seeing the public awareness of “Orogeny” grow? It seems like you guys really bust your asses for the band
and are very involved in not just the creative side but also how you are represented. You’ve been at this awhile and the pay off is in the raw
sounds you just can’t fake! Plus, I also heard that you played with Goatwhore. I am an old fan of theirs since they played my town of Woodstock, NY at a hippie club during ECLIPSE OF AGES INTO BLACK days and I wondered how your gigs with them went. It’s a great pairing. Your band reminded me of them a bit at first in the sense of it being a merger of thrashing and bleak styles with a unique twist put
into the sound by the background of the artists.

NF: It feels great when people tell us they dig the album.  It makes me think of all the countless hours we put into making it or the hard work we’ve
put into the band itself, moving out of state and having to establish ourselves. I must have seen Goatwhore 7 times now. I love that band and they’re
always coming through town.  We definitely recognized they’re a hard working band and we try to have that same mentality.  To share a stage
with them was an awesome feeling.

MYE: What is next on the horizon for Turbid North? What are you stoked
about that you have coming up and what do you hope kids take away from
“Orogeny”? Have you also been writing new stuff?

NF: We plan on touring our asses off this entire summer, We have some dates with Unearth in early July and then we’re touring the west coast mid
August.  We hope to tour until winter, then buckle down and start writing. I just now started writing some riffs again and I know Alex (guitar) is as well.  We usually build up an arsenal of riffs, and then take them to the jam room and work them out. I will tell you that the next one will be heavier, but I’ll probably say that about all of them though. One thing I hope kids these days can get from “Orogeny” is that you can have songs that tell a story, lyrically and musically.  Songs that take you somewhere, let your ears do all the work and it can still be aggressive and heavy.  Also, if your in a band and are wanting to do this full time, don’t give up!  I know it sounds very cliché, but in my experience it’s definitely true. We’ve seen so many bands come and go, and somehow we
managed to stay at it.  That’s really all it takes, if your music is good enough and you’ve worked hard enough, you’ll get noticed.  The main thing
is to keep working at it. Keep building that mountain.