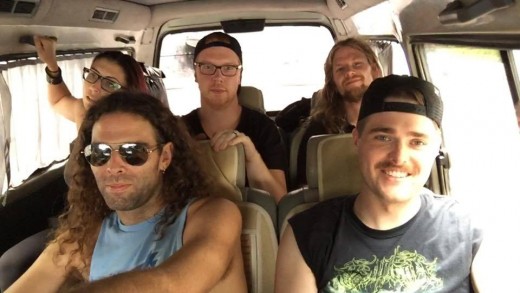 Unleash The Archers are the exact reason why metal will never die. I know, I know…I say that about a lot of bands I blog about because I mostly write about bands I think are fuckin’ cool, but I dare you to hear the high note glory of Brittney Slayes and the classic metal wind up of her aggressive but focused band and not believe their anthems will ring out across the Rainbow Bridge of Asgard for all time.

It was a pleasure to check in with B. Slayes and talk their China trip, The Avengers, the motivation of being a band from a cold place and much more BELOW. 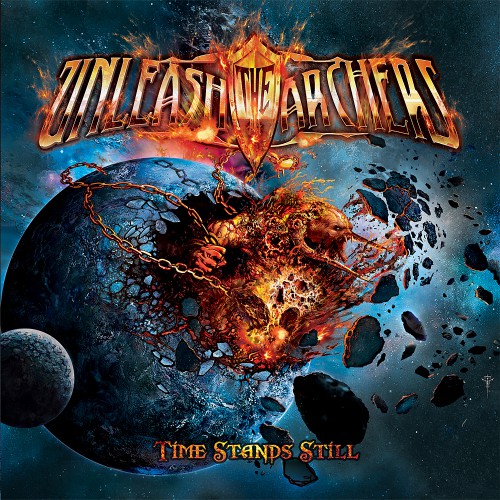 I love your band. Brittney, you have like the best highs right now of a new band (at least new to me).  Soaring!  And you really have a driving, classic heavy metal attack with some new thrash as well, plus, epic lyrics celebrating metal culture.  I miss 3 Inches Of Blood and also love Blackguard.  Why are Canadian bands often able to tap into the epic heavy metal power more easily than some American bands? Is it because you are “warriors of the ice and snow”; as “Frozen Steel” asserts?

Hahaha to be honest I think that is what does it, we live in this expansive wasteland of a country that is so beautiful and so breathtaking; it’s just epic really.  It inspires these explosive feelings of pride and honour and we know in our hearts we would fight and die for this country if it ever came to that, so that’s what we write about.  We would stand arm in arm across the land from ocean to ocean and defend every inch of it; I know all Canadians feel this way.  Metalheads here are very united and supportive of one another and we are very proud of what we have made here.  The scene in Canada is small but powerful and is growing steadily.  This is the greatest place on earth I tell you!!

How’d this band come together? You seem to be the full package! Please make more merch though!

Scott (drummer) and I started it when we graduated university.  We have been through a few lineup changes but I think we’ve found ourselves a solid core now and will do big things together.  We originally formed in a small town called Victoria that had a thriving metal scene, it fostered our growth as well as motivated us to get out and tour.  We have always loved touring; from the very beginning we understood how important it is to get out of your hometown and hit the road.  Social Media may be everywhere but the best way to make a name for yourself is to get out there and show the world what you can do live.As for merch, we have no money.  It costs a lot of money to print t-shirts.  We have printed some now for the tour, so we will have new stuff at our shows, and we will try to update our website and mail stuff out from the road, but it’s hard.  Also now that Napalm takes most of the income from the new album we make even less money…  Buy our old stuff!  Buy the old CDs and we can print more shirts.

One time Ross The Boss from Manowar came and played Manowar songs at a dive bar I worked at because I somehow got help booking him on 9/11 no less.  It was a fucking metal night.  From your song &quot;Test Your Metal&quot;, I was curious as to some especially extra metal experiences in your own collective memories?

The song ‘Test Your Metal’ is all about getting out on the road and touring.  It’s about leaving the comfort of your hometown crowd behind and proving you got what it takes to the rest of the world.  Like I said before I think touring is important.  We have played a lot of great venues in great towns and met a lot of amazing people.

Just last night in Guangzhou, China we played a show with an incredible band called Rain.  Afterwards they took us out to this tiny roadside restaurant, it seemed so ramshackle but the food was wicked and the beers kept coming and we had such a killer time.  They spoke really great English and the toasting and cheers-ing never stopped.  In China they have a cheers called ‘Gambe’ which basically means drink it all, so when someone yells out Gambe! you have to chug your drink, no matter how much is left.  That happened a lot hahaha…  It was hard to say goodbye to them, we all wanted the night to last forever!

Thor. Greatest Avenger? This is a trick question.

I could agree with that.  He does embody a lot of the characteristics I cherish in a warrior…  However Captain America is pretty awesome too…  And if Black Widow could just get passed her personal issues she would be bulletproof, know what I mean?  Like why do the kickass women in movies always have to have some black past that haunts them?  Live life with no regrets is what I always say, because what’s the point?  So you killed some people and you can’t have babies anymore, who cares, move on, there’s nothing to be done about it now, so focus on the path ahead of you and when you wake up every morning, choose happiness.

“Tonight We Ride” has such a fucking awesome chorus, huge screams and a sexy melodic sense of movement.  And so much steel in the riffing!  Does this one ever threaten to go off the rails live?  It’s like a fucking comet!

Oh heck yeah, this one can get pretty wild sometimes, especially if we’re super stoked to be there and the energy is high.  Also if the audience is super into it that just riles us up even more.  I really gotta catch my breath at the beginning of this one,so I try not to go too crazy, but sometimes you just can’t help yourself, and I am kicking myself by the time we reach the chorus hahaha.  That song is fricken hard!  But I love it and I hope the audience does too 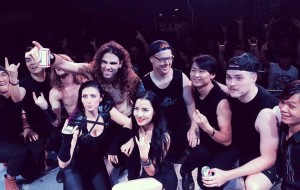 How did your relationship with Napalm Records start? It seems a perfect home for your band as they can do modern, classic, epic or more extreme bands justice.

\m/They sent us an email hahaha… Basically right as we were heading into the studio to record they contacted us and asked if we were putting out a new album, which we thought quite timely.  We sent them the Dreamcrusher demo and the demo that we had done for TWR and they liked it.  They asked us to come to them first once it was all recorded, so we did.  A whole boatload of negotiating later and we signed.  We arehappy to be a part of the Napalm team, we have lot’s of Canadian friends on the label(Crimson Shadows, Striker, Mortillery) and they are working really hard for their bands in the scene right now so everything is going pretty well so far.

I see you are endorsed by Ibanez, always loved their axes.  What about the company proved to be the right fit for UTA?

As I do not play guitar I personally can’t say, but I think they were really enthusiastic about having us as a part of the family, so that was important.  The boys both got new guitars and are trying them out and so far they love them, so the future looks pretty bright together I think!

Do you plan to tour smaller clubs or try for more larger festival dates?  Please be hungry cuz your music sounds very driven and I need this band to stick around in my life! haha.

We will play whenever, wherever they’ll have us.  We are playing a lot of small clubs on this upcoming North American tour, but we do hope to play some festivals next summer as well.  Seriously though we just want to play music, we love being up there on stage rocking out with our fans, it’s why we do this, so if the show works with our schedule we’re happy to play it.  You can see all of our tour dates HERE. Thanks so much for taking the time to get to know UTA a little better!  We’ll see you on the road!  Hails from the frozen north!  \m/ 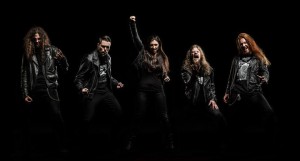 More News On Unleash The Archers:

More On: Power Metal, Exclusive, Unleash The Archers,
share on: