Interview: Unlocking The Truth – Welcome To The Family 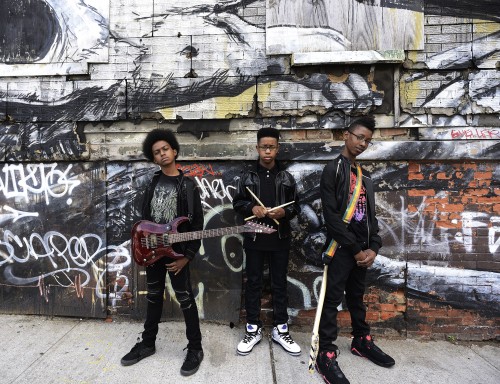 “Music is for everyone” – Jarad Dawkins

Things are getting interesting again. Just had a good few 24 hours. Just got a press release about a band called Acid Baby Jesus. I hung out with a dear friend and the great band Tuba Skinny and ended up partying at Neil Gaiman and Amanda Palmer’s place with them, woke up and drove home to interview new sensations Unlocking The Truth. It has been a refreshing cross section of people who love life and expression and unity, in my vicinity or inbox. I’m thankful for the abundance in that. Rock n roll is still here to stay.

Unlocking the Truth are that very young metal band from Brooklyn, New York, who went viral. They are more than just a novelty. Even OK Go put a lot of work into that “Here It Goes Again” video where they were jumpin around like maniacs, but Unlocking The Truth’s members have literally started from the very first place on the game board and already moved far enough to not only pass Go! and collect $200, but the kids signed a very hefty deal for 1.8 million bean$ with Sony many bands would squeal for. Let’s hope they get a fair shake.

In March of 2012, Unlocking the Truth competed on Amateur Night at the Apollo Theater (aka Tears of Blood) and made it to the Show-Off Round, and afterward they began performing at festivals around New York City and in Times Square.Last year Malcolm and Jarad decided they needed a bass player, so they asked their best friend from pre-school, Alec Atkins, to join their band. Even though Alec did not know how to play bass, the boys taught him how to play from scratch.One of Unlocking the Truth’s biggest breaks came last August after winning the first round of the AfroPunk Battle of the Bands.

Although they did not win the final battle, they were still invited to perform at the AfroPunk Festival.

It was a pleasure to speak with drummer Jarad D. about the guys amazing journey so far, The Air Force, Testament, Taylor Swift, friendship and more. He even alluded to me they got kicked out of a hotel already for skate boarding but that is on the DL.

One thing people love about your band is you guys come off as real. They see Times Square and love each other and are friends. You can actually play and are trying. Writing your own parts and still love real rock n roll. It’s refreshing because there’s so much fake stuff out there now.

You’ve been through a lot of stuff together already. How can you not be overwhelmed by all of it? It must be an insane feeling.

Yeah, it’s very exciting to have this moment, our dream come true, at this point. This was our dream of what we wanted to do when we was younger. Now it’s coming true and we have supporters to help.

I was gonna say ,” when you were little, did you imagine…but you guys are still little”. (laughing) Did you picture it would be like Guitar Hero where it’s all the people like ,” Yeahh!!!” in the front?

(laughing hard) Yeah, kinda. We’ve been playing bigger shows now, so it’s great. Not a lot of kids get to play in front of big crowds or even a festival like Coachella. Playing with Guns N Roses or Motorhead or anything like that.

I Know. Guns N Roses, that was the first band that made me want to be a singer and love metal. It’s great to see you new guys appreciating that stuff. Helping bring attention back to it to kids your age, in a way. Some people are like ,”they are already gettin’ all this? It’s not fair!” But you guys seem like real little rock n roll dudes. 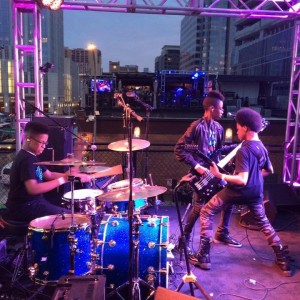 Did you get nervous going up in front of these legends?

No, I didn’t get nervous. Cuz we practiced and we worked on a high confidence level. WE just go out and perform and put on the best performance we can.

Y’know, I’m so glad to hear you say that. That’s such an important thing for kids to see. If you can just be yourself, maybe people will payattention. Don’t worry if people like it and just get stuff done. It worked for you guys.

Yeah. It sure did.

My buddy- Ultram drummer Chris Turco asked if what if this is the peak of the downhill of the rest of your lives. Would you regret it? Or still be thankful? Did you ever think ,”Oh, I’ll be an astronaut someday”?

Yeah, I would still be happy. Yeah. Before even the band started, I was gonna go to the military.

Yeah? What branch did you want to do? Air Force or Army?

Ahh, the Air Force. Try it out. But mainly deal with the land, only.

You didn’t want to fly jets?

No, cuz I’d crash into another plane.

It’s better to be safe, right?

See, that’s why I never rode a skateboard. My friends were like ,” get a deck, kid.” But I knew I’d wreck and break every bone.

(laughing) I started hanging out with Malcom and sooner or later we discovered we had a lot of things in common. The thing that started the band wasWWE wrestling, Japanese animated shows and Dragonballz. We just started the band.

My bass player friend Dave Daw used to work for the wrestling industry. He did massaged and met The Rock and stuff. You know who likes wrestling? Adam Jones from the band Tool. You should tweet to him and be like ,”what up, Adam Jones.”

Do you think people forget that rock n roll comes from Chuck Berry and African American roots? I love hip hop or even some dubstep but get sad when some younger black people don’t get into rock n’ roll. I mean, white kids too or whoever. Everyone should love rock n roll.

I wouldn’t just consider it our music, because everybody has their own sense of style and feeling. You can’t say it is just for African American people, because it’s for everybody. Music is for everybody.

Elvis did music he loved and was inspired directly by black rock n roll acts. But both are great. Everybody has done cool stuff. People gotta come together.

Yeah, everybody comes together and makes their own music, y’know?

Yeah, we actually did.

Who do you think writes good choruses?

I agree, Dave Draiman’s choruses are his strongest suit.

It was great that we got to work with their same producer. It feels good when people care about the music we make to sound good.

What were fun moments of Coachella? Were you gettin used to riding around on those carts and being backstage?

You think his head’s gonna blow up now and he’s gonna get a big ego?

You gotta beat him at some video game and take him back down a few pegs, man.

I’m friends with Dr. Know from Bad Brains and he lives near me. He said “Each one teach one” a lot to me. I think that’s great that you guys are trying to learn all kinds of music. You like some metal core, some classic rock. When you write do you just play or do you decide to write a part that sounds like, I dunno…Killswitch?

Well, sometimes we want to have it hardcore or more but there’s a lot that goes on when we create songs. Someone will bring a riff to the other band members.

If there was one instrument you could buy that you havent yet, what would it be? A pick of Destiny?

The Taylor Swift acoustic guitar. It was in Guitar Center. I was playing it and it sounds really nice. Nice wood.

Do you feel like you have more time to practice now?

A five year old girl I know, my friend’s daughter, wanted me to ask you if you can tell kids how they can get good at their instruments?

I would say to her daughter that when it is her dream come true, you must dream. Because we made our dream come true. You have to feel it and consider it a possibility. Practice doesn’t make you perfect. You become better and it becomes what you do. So I would say if you dream and feel the emotion, always dream big cuz what we did was dream big and that’s what we did. If you dream big, anything is possible.

I agree, things can be hard in life but you gotta keep tryin. When you used to play by cars out in the road did you ever think the cars were too loud driving by and you had to play louder?

No, If anything the cars were usually stopping.

It works out for the best. Do what you’re trying to do. It might not be right for that person but it may be for you. Give it your energy.

Do you think as teenagers you will want to go on tour even more?

Do you get to spend time with family these days? They must be so proud of you.

Yeah, we do get to see them. So that’s great. They are proud.

Are you gonna tune down lower like Korn when your voices drop and you grow up?

(laughing) Our new tuning is drop A.

Yeah. We used to play in C. That was a major change but it worked out for the best.

Yeah? you like slam parts? Any bands that you love that use E tuning?

They have a new DVD in Santiago, chile. You should check it out. It;s them playing to a raging crowd. You’d like it.

Oh, the Red Hot Chili Peppers. Queens Of The Stone Age. Oh, I was listening to this band that starts with an E…Excite Us?

Exodus. They rule. My buddy Jason from Prong is friends with their old singer Rob. Shovel Headed Kill Machine is a great album. If you like them you should hear Testament. Testament have a song “Native Blood” with a cool video about the singer Chuck Billy is and knows Native Americans who were picked on and how to overcome prejudice. That is a new song but they are from the same early thrash era you guys like.

(excited) Ok, cool. I will check that out.

We have shows with Living Colour. Shows with Lacuna Coil. A show at Webster Hall in NY. I think maybe Marilyn Manson.

More News On Unlocking the Truth: