Goooooooood morning Vietnam! It’s 0600 hours. What does the “O” stand for? O my God, it’s early! Speaking of early, let’s hear it for that Marty Lee Drywitz. Silky smooth sounds, making me sound like Peggy Lee…

The following interview was conducted with guitarist/singer Son of Fogman from Montreal heavy psych band USA Out of Vietnam. Click here for this great debate with national moods and, in essence, music theory itself.

1.Were you interested ever in the music of Sun Ra Arkestra? Your music makes interesting use of space.

Woah, you went right up to the pitchers mound and just served up your fastest curveball. I actually love Sun Ra and own “Space is The Place” and “Joyful Noise” on DVD as well as rare vinyl copy of “Nothing Is…” on the original E.S.P. label. I guess our only influence from Ra is to feel free to experiment in any way and deviate from the status quo, even if it is the established status quo happens to be festering in the underground music scene. We do have a lot of soundscapes but Ra was coming up from the frenetic sounds of be bop so we definitely have a divide there. Also Sun Ra’s philosophy was a pseudo relighous/science fiction thing while our music is more grounded and is really about squeezing the light out of darkness and overcoming personal turmoil through hope for redemption. I guess lyrically we are more akin with Blind Willie Jefferson than Sun Ra.

2. I love that. It is lovely that you disregard genre and just make good music. Was it intentional or just a result of the people in the band communicating?

All of us listen to music that is pretty eclectic from each other and I would say that all of us individually listen to all kinds of music and don’t hang our hat on just one genre. I am a music journalist and bassist Jordan Thomas Brown III runs a D.I.Y. venue here in Montreal called Turbo Haus as well as our keyboardist Blankie recently just hosted a show in her apartment so we are exposed to all kinds of music. Living in Montreal its pretty hard not to get turned on to all kinds of different music and maybe we’re a result of that. The creation of our music feels organic but admittedly if things sound a little too similar to something we’ve already heard we tend to get bored quickly and steer away from that.

3.Is there a particular news cast growing up that you vividly recall as impactful or even jarring, of public import? I remember the tragic usa/nasa Challenger Explosion incident from young days in school.

I remember the Challenger Crew explosion as well. I guess I was really affected by the Waco incident in ’93 when the A.T.F. burned their compound down while media coverage showed the A.T.F. knowingly torturing the inhabitants of the compound with sub sonic noise and recordings of tortured animals. Watching the siege live while I was in New York I realized that people can be helpless to government sanctioned oppression and that North America is not as free as lumpen masses would think.

4.Why are we so insistent culturally to unite during a big tragedy but stay tragically divided in north america at other times politically, such as immigration issues or health care or woman’s rights?

I should’ve farmed this question out to Fogman as he identifies as an activist. Growing up punk rock and spending my teenage years in an alternative school in Toronto it galvanized me as a left leaning individual. I find it really weird that a lot of my friends who I grew up with, who rejected what we were given are now fully entrenched in more conservative spins. It’s really weird to read facebook posts from old friends who have taken up with right wing politics and are now born again Christians. Having said, I’m glad we live in a society where people are allowed to express their political ideas, whether I think it’s wrong or right.

5.Is recording a challenge or does it feel a natural output of your organic created works? you nailed so many tesxures yet still with a live feel. The dynamics are wonderful. And that drum sound.

Well the drum sound is all thanks to engineer Howard Bilerman and the actual drumming of Le Tigre. Because the tempos are so slow we really wanted to explore the room sound as much as possible and Howard was hip to that. Recording is a Herculean challenge as we are usually recording with a very small budget but are looking to the great epic classics of the seventies for production inspiration. We record in a really weird way as we record the beds first in a very lo fi affordable way and then start stacking orchestrations and instrumentation over top. Certain sections are left blank as we have to use our imaginations and imagine a string section or vocal choir, which can sometimes take months to actually complete. Once we have way too many tracks we erase the original beds and then re-record them before we start the mix of the record. A lot of the superfluous tracks are then thrown into the garbage. Mixer Howard Bilerman was an expert in telling us what we didn’t need. I know it sounds ass backwards but it seems to work for us and may be an ingredient to a unique sound.

6.”The pure universal genius we’re all part of”, do you feel connected? Further down the rabbit hole, haha…

You are referring to an interview I did with artist Ron Jamieson in our rehearsal space. The song is “You Are A Comet, You Are On Fire”. We had the two parts of the song and I knew that we wanted to use brass to increase the jubilation of the second part but wanted to something to bridge the two and really wanted to use spoken word. I think I was just really inspired about the spoken word on the Swans’ “Soundtrack For the Blind” record. We started a hot line where we used a dedicated phone line as advertised in a local paper and asked people to phone in anonymously and record there happiest moment ever on an answering machine. The results were lack luster at best. Our bassist at the time Dustin Hawthorne got what I was going for and set up and interview with me and Ron Jamieson. I asked him what was the happiest moment in his life and what you hear is what you get. Well sort of, when he got specific in his answers we edited it out as we wanted just the trembling emotion in his voice to tell the story. I especially loved how he fumbled on the word “fumbled”. He came very close to crying when we turned the microphones off and I was kicking myself that we didn’t get that on tape. He is an amazing man and his artwork is stunning.

7. Are you fans of any particular Vietnam-era music or films or literature? Also, are the horns sampled or live in your songs?

Wow, another curve ball and I’m going to have to swing and miss here. If you do let me walk to first base though I can offer up a South Korean guitarist named Shin Joong Hyun you should check out. Really fuzzed out and fucked up psych. His record Beautiful Rivers and Mountains came out in 2011 on the awesome Light in the Attic label. Highly recommended and will definitely put the bubble in your bong. Uh, the horns were tracked by Montreal player Montreal Ryan Frisell at our rehearsal space and at Hotel 2 Tango studios here in Montreal. Ryan plays in an amazing band called Bent By Elephants.

8. In a live presentation do you concentrate much on how the band is presented visually or worry more about the music speaking loudest?

Yes, we try and play with our visual projections as much as we can but often when we are a support band or playing a small club this can be a bit trying. I think the projections are just as important as the music in a live setting. Ultimately I would like to release DVD versions of our record so people can sit and watch the projections at home while listening to the record. Visual artists who have contributed has been Amy Torok, Cal Higgins and are own Le Tigre. Higgins projections can be seen in a live video on Youtube at our record launch at La Sala Rosa

9. Any hypothetical tour situations you would enjoy or a real gig you did that upon reflection stands out? thank you.

We have been so lucky just to play with some of our favorite bands. Recently we just had our minds blown watching Loop when we played with them and have also been able to play with everybody from Oneida, Locrian, Mogwai, Swervedriver to Ty Segal! Thanks so much brother and hope I knocked a few into left field. Now off to find some rad Vietnamese music! 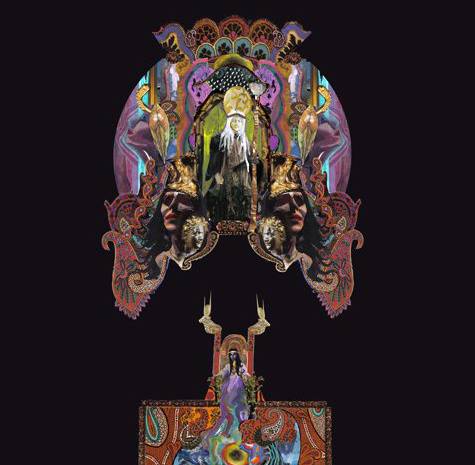 More News On USA out of Vietnam:

More On: xx No Genre xx, Exclusive, USA out of Vietnam,
share on: