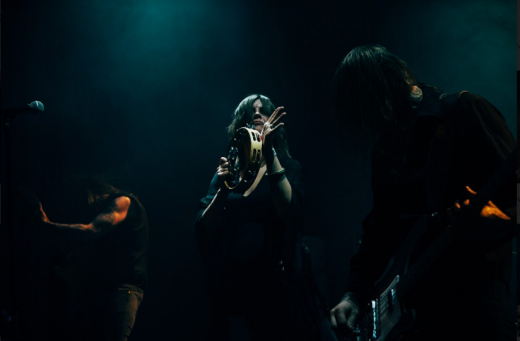 Thomas Corpse: I have a deep affection for that word for some unexplained reason, and in this case it happened to be the perfect title to summarize the state of things and the feel of the album. The ongoing virus had not yet started when the title was chosen, so it’s not related to that. We recorded Vertigo in late 2019, but it has just taken so long to release it because of the current situation. Anyhow, great to hear that you’ve enjoyed the album, and found the motion behind it.

2. How did you come to work with Giuliano Di Girolamo for the “Summer Tripping Man” video and know it was going to be a good fit? I love how the video defies expectations. The song title you would think might be a sort of sixties optimistic song but the video is very grey and apocalyptic/ominous (at first). The mushroom cloud into mushroom trip scene also reminded me of how a lot of the 1950’s H Bomb fears that intensified under Truman eventually evolved into the pushback of the 60’s counterculture. Well done!

Needed to find an artist that does animation in the old-school way, and so I started browsing through certain tags on Instagram. When I saw Giuliano’s art, I immediately knew that this is it. Then I contacted him hoping that he does these kinds of collaborations, and luckily he did.

Giuliano found the core and true spirit of the song with his work, and we are really happy with the results. And like you also pointed out… the name of the song is very light compared to it’s then revealed heaviness, and the video supports it the right way. Mushroom eaters and mushroom clouds collide! 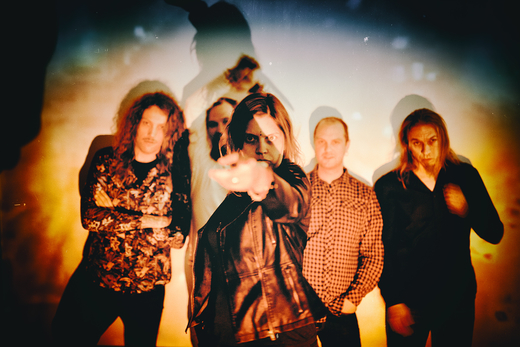 How do you approach the material in this band versus some of your more metal projects, Thomas? Obviously something like Winterwolf is more of an occasional thing, so I imagine the parts sort of accumulate over time naturally. Jess seems much more of a sort of ongoing explosion of ideas and you all maybe playing off one another a lot? Is this a fair conclusion? It has a very “Live” band feel at times, in a great way. Tribulation is another band who sort of has that quality when I hear them, which is all too rare these over studio reliant days for some groups.

JATAO has been like a great adventure in the world of rock. So there’s this mentality that no idea is too wild to be explored, and so we have been sounding different on our every release. Sometimes things are heavier, sometimes they are lighter. You never know where’s to next, and that keeps it fresh and interesting. One should not restrict art whatever the genre might be, so best to keep your mind open when writing. Winterwolf is an important band to me as well, as it is my first own band from the late 90’s. It stays as it is, that being an old school death metal band that fills the yearning for that dark metal of death which I love. Therefore it kinda stays within that certain cave, and so I guess writing for Winterwolf serves another need. The need to mosh?

Haha. I understand this. What do you mean when you say this album is sort of a companion album to The Horse & Other Weird Tales? Were there specific thematic goals for this record? Of course the sort of dark garage psychedelia otherworldly vibes are there. I feel like all the performances are constantly pushing one another to greater heights, an awesome thing to hear as a listener. “Burning Of The Velvet Fires” is a song that really is a good example of this. Was it a balance as a band to know when a vocal or keys or guitar should take the lead and not step on one another? This band blend’s together as a team VERY well and showcases everyone’s strengths!

I can’t really explain it thoroughly, but yeah…they feel to me like the night-side and the light-side. We kinda continued to ride our horse towards darker waters, and landed on material which became Vertigo. There were no planned themes of continuum or anything like that, it just pushed itself into what it became. We try to give a lot of thought to dynamics and arrangements in our songs, always keeping in mind who’s leading in which section and acting accordingly with that. It’s a team play for sure, as you have to go to low points to make the high points hit even harder. 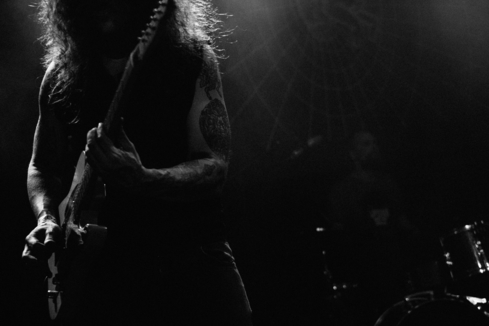 “Strange Earth Illusion” struck me as an interesting title. Bit of a tangent…It is crazy to me how much of our history and assumptions on what is normal is so fucked up. I was reading about how King James the Sixth of Scotland (1566 – 1625), who later became James the First of England…we literally allowed him to codify this compromised and biased King James Bible that so many people still use! This despite him being a known torturer of women in super dark witch hunt frenzies. It is tragic because his mom was Mary Queen Of Scots, a very strong woman, but he was raised by really shitty sexist Protestant dudes away from her and turned into a very fearful and horrible obstinate person for a long time, in my opinion. And it absolutely affected and shaped his Bible translation. But people think that is not completely insane. I don’t know. Your song maybe means a literal illusion of a weird world? Haha. But I couldn’t help thinking how many illusions people literally live within their own minds!? Thoughts?

How we perceive this world through our personal filters is a subject that I think about often. When I struggle to find reason within certain matters then I tend to ponder through them with an ongoing endless discussion with myself in my head. Trying to see all things from different angles, and gaining understanding behind actions. Why many prefer illusion to despair when reality gets too harsh. Some disguise their own sins in illusions of a work for the greater good. Trying to justify their actions that are ego centered from start to finish. It feels like we’re living inside a weird illusion, and it’s impossible to find escape from this rabbit hole. Maybe when we die we just suddenly open our eyes somewhere else, and wonder what the hell was that all about, hah!

So “Love Zombi” is sure to be a popular song for fans, I’d wager. What led to the creation of this song? Is it sort of a Fulci Zombi 2 voodoo thing or worse? I was reading an old super fucked up article from 1992 about how if Jeffrey Dahmer succeeded in his plans to make a sex zombie of one of his victims, he would have stopped killing-”unless he wanted two zombies,’ a prosecution psychiatrist testified back in the day.

Horror movies have always fascinated me, and from an early age on they’ve been on my constant diet! “Love Zombi” felt like the best title to portray the madness of lust in this case. The middle section of the song is our kind of a tribute to zombie walk -themes, you know? I mean I could imagine the zombies drawing near while that pumping beat would play on the background, hahah.

European horror cinema has really great soundtracks, and surely they have had their impact on me. For Examples…if you’re not already familiar with the work of The Goblin in Italo horror scene, then there’s a great catch for all horror / music lovers.

What are your plans for the year upcoming to promote this? Obviously Svart will help but things still are somewhat uncertain in the world. Are you actively trying to play a lot of still being cautious? I know some bands are just not releasing records until they can do big touring cycles again.

We don’t have any shows coming up at the moment. The work for the next album has already started in all this silence, so the “extra-time” is being used for song crafting. Who knows, maybe our next album is recorded and released before the venues even open again? Truly interesting times we are living, as the big scythe reaps with its sharp blades. A dark reminder…

How do you think Finland has shaped you as a musician, particularly? I went to Finland and Estonia a few years ago when my father passed away (he was born in Tartu) and I so long to return to that part of the world! I didn’t get to go to Helsinki which my dad always loved the culture of.

Nature and solitude have definitely moulded me. Growing up in the countryside and being surrounded by beautiful forests and waters was mind-blowing. When looking back at it now… there was so much freedom that it is hard to even imagine anymore. Me and my friends were a wild bunch, and got to experience all the adventures that little boys dream of and beyond. Alas, also it was a poor time when being a teenager, as Finland was in deep financial decline in the nineties…our great depression decade. Music Television was a big thing for me back then, and I used to tape it as much as I could. Music has always been my great escape, and it continues to be so. Also the Finnish mentality for sadness and melancholy is built deep in me. We love the dark and all it’s shades.

Thank you! Outstanding record! Hails to you all!

More News On Jess And The Ancient Ones:

More On: Folk Metal, Exclusive, Jess And The Ancient Ones, Svart Records
share on: