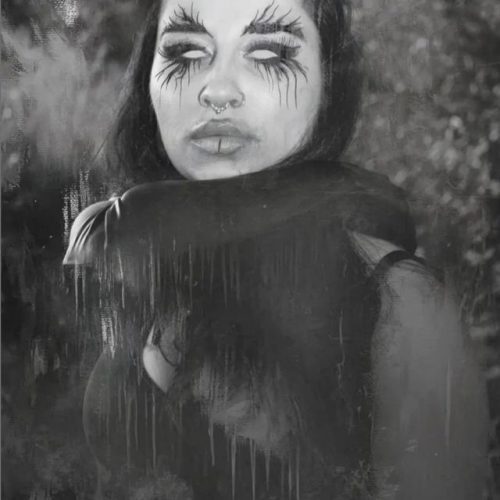 VHS¥DEATH is the genre fluid, dark and gothic tinged borderless experimental project of Natalie Wardle (She/They). We checked in with the restlessly inventive UK based creator about the new Corrupted Geisha EP, one of my favorite things so far this year. I know as a writer it is my purported purpose to tell you WHY I like it, but music is also experiental.

For myself, I feel that there is a very wide open palette in play here and it is exciting to not know where a release is going to bring you track to track but being thrilled to trust the artist in the twists and turns/mind warp. There is also a sort of dancing around the edges of limitations, like journaling a transmogrification of pain as messenger to shackle shedding revelatory process via samples, sound collage and just bad ass music that makes you want to get down, freak out and dare to feel things…even if that feeling is vertigo, a chill up your spine, certain doom or the contradictions of human conditions.

Are you in London still? How does that affect your work? Sometimes environment can add to a certain vibe, y’know?

V.D: Yes that’s right. But I’ve moved out near West Hampstead, during lockdown I was stuck in the burbs by Morden Hall Park. Going on bird hunts kept my last thread of sanity. I find the manicness always motivating since moving closer to the city centre, but it’s a little tough to put all the culturally clashing ideas you are organically inspired by day to day on paper.

I bet, I guess it just gets soaked up and comes out. How does it feel to have the EP out and now to have this forthcoming tape getting off the ground with Cruel Nature (HERE)? Also, from what point of your life were you first interested in music and then developing an interest in the underground or an outsider approach to creating?

V.D: It feels a slight relief, I guess. Since the ‘New World Order’ I like most other creatives have certainly not been short of an abundance of ideas. But unfortunately these also came hand in hand with my long term anxiety and manic depressive episodes worsening and also as a result of this the worse coping mechanisms I usually would associate with consumer ‘plebs’… but unfortunately this is what we were all tricked into. Life permitting, I intend for this very overdue little lockdown offering to be the first of numerous. Fitted alongside my radio and writing commitments. It will also be available digitally and on cd via Misanthropic Vendetta and Epitronic. I also will be having to bite the bait an go fully digital as we’ve been forced that way an basically don’t exist on Google to be discovered by new listeners otherwise.

Hip hop influences, corruption, working class solidarity, spirituality, the occult…Do you build tracks around your samples first on this release or make textures and feel out the music first, then find things that fit?

V.D: Erm this particular manic episode mostly experienced at the beginning of Covid Spring 2020 when I was experimenting with self producing alone. I was feeling somewhat juvenile in temperament an spirit an decided to listen to current angst core producers as I like to call them like Ghostmane, Suicide Boys and Lil Bo Weep. It was a short affair as during the end of the mastering I was back to listening to more metal and band stuff like Electric Wizard and Black Sabbath. 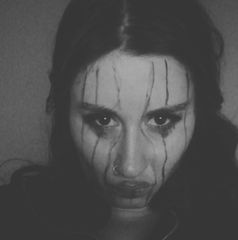 Who are some of your bigger influences? I really enjoyed “Snakes In The Grass”, maybe the trippiest and most disorienting song, haha. Did creating these sort of musical escapes help you through the pandemic ups and downs?

V. D: I obviously already answered that in the previous answer but I can elaborate. As an artist I AM deeply inspired by female trailblazers like Lydia Lunch and Cosey Fanni Tutti who’s work is fearlessly exploratory, experimental and multi disciplined an very much a life’s journal and archiving of their experiences of trauma transformed into art. This ethos so resonates with me. The art side complementing it and the themes expressed behind the lyrics are all of equal importance to me. But musically my taste seems to swing like a pendulum depending on my mood. But usually something with a hypnotic energy, often heavy swinging mostly between doom metal, industrial, dark techno, even horrorcore hip hop like Gravediggaz. But I actually have been a life long fan of The Pixies, those dreamy, abstract soundscapes an off beat anthemic guitar riffs just inspire life in me.

Facts. How would you describe the headspace difference between this and Returning Videotapes stuff?

V.D: Well as this was my first attempt an self producing to prove to myself an other naysayers I could do it without expensive equipment or expert knowledge. It’s very different RV started as as essentially just a jamming goth indie rock band. Progressed to a bedroom producing duo. It’s a revolving door of members, for a time it went full shoegaze for a handful of gigs an I wasn’t even in it even though I founded the band under the old name Wreaths. The genius name was reference to American Psycho by my very cynical elder goth guitarist Dave Foster. That trad goth element will always remain just more full heavy rock band sound as I originally intended. However for lots of sucky reasons gigs were always postponed till now.

What are your plans for the rest of 2022 or are you just taking life as it comes?

V.D: To get some more gigs, an establish myself in solo endeavours. Two more eps planned, one solo after this release 11th March, one band one on April Fools. An also to progress with my inhouse live recording for my monthly show and podcast on Threads Radio called Viral Nights. Finally I have also founded my own dark electronic label Whipped and Bound and will be planning the launch night showcasing solo artists in Summer at Helgi’s Bar.