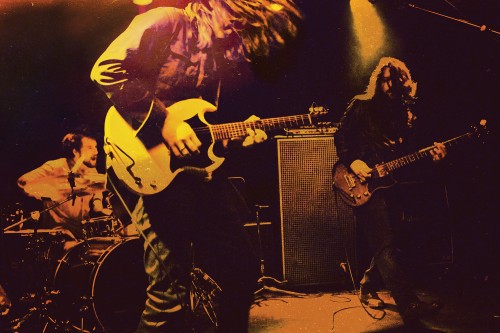 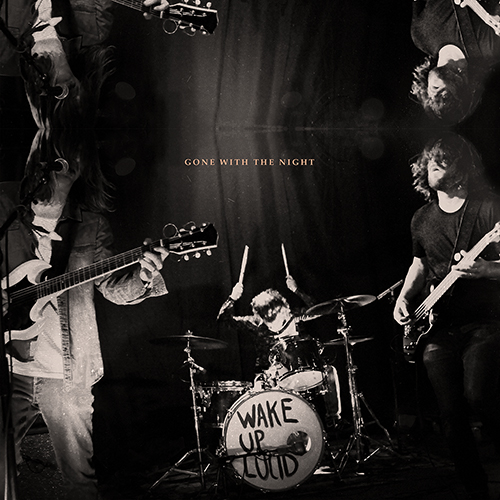 Is making a band kind of like an art installation these days, or has it always been that way?

Ryan: Yeah I think the live performance side of music has always been some sort of an art installation depending on how the band approaches it. Some people want to be entertainers. Others just wanna get in the same room with people who share the same taste and all get on the same level, that’s how I feel we approach it. We go out, turn down the lights and try and play the songs the best we can, that’s what’s important to us. What’s difficult nowadays is that every band has to be able to first be a good band and then also be really good at business and marketing, two things no artist really gives a shit about.

Jamie: How one represents themselves to the public is, or should be, entirely up to the artist. Today, we’re definitely seeing a demand for artists to work on a multi-­media platform, so it definitely seems like most bands have to pull some extra-­currricular leg­work to stay relevant. That’s just people adapting to contemporary circumstances.

Who would be your ideal music producer, Frank Zappa, Butch Vig or someone else?

Ryan: I really don’t have an answer for that, I’m just always looking for songs that I like, I rarely ever look further than the name of the band to be honest. We have been working with Joe Cardamone who has got a pretty good take on the kind of sounds we like.

Ian: Man, I dig Butch Vig! Two of my favorite records, both sonically and production-wise are Sonic Youth Dirty and Nirvana Nevermind. Some albums are heavy. Some are polished. Some are filthy, some melodic.

Jamie: A producer basically becomes an added member to the band for the short period they’re conjuring up a record, which means developing a musical relationship over time, communicating musically. You want someone who is on the same vibe as you. Someone that has the ability to also see a similar vision as the one you want represented on your album. It’s hard to imagine some all­star producer working with us because we don’t personally know Butch or Frank.

Is there a particular manner in which you prefer to start the preproduction process? Sometimes early gems make the best part of a recording process, the mental “spark” or lightbulb stages. Look at the Stooges or Beatles or even Weezer outtakes, for example.

Ryan: We don’t have any type of specific approach to writing. I think for any band or songwriterthat “spark” is the draw that keeps you going and also it’s the fear in the back of your head that it might not happen again because you have no way of controlling. What works best for us is tohave the idea there, work it out a little bit and then go into the studio and try and capture that spark of it all coming together live. If you catch it when it happens then you really have something special, but trying to figure it out and control it and get the perfect take seems to be the worst thing you can do.

Jamie: There are some lightbulb moments that initiate a good song right from the get go, and its magic, and you whipped up a tight song in 15 minutes. A lot of times, its about finding that magic hidden within a song that changes the structure. For example, Ryan will have written a couple songs on acoustic guitar, brought ‘em to practice, we learn ‘em and jam on ‘em till we discover something in it. Different changes. Different Dynamic. Etc. As you go through the motions you will stumble upon those lightbulb moments.

Ian: It’s simple. Bring an idea and an iPhone. Aside from band members, ideas and instruments, the Voice Memo app is a vital part of the process. During a warm up for a rehearsal, we’ll take a small idea and just jam it for 2030 mins. Halfway through, someone hit’s record on their phone and we make some noise and see where it takes us. As rehearsal days go along, more ideas pile up on phones, and eventually we end up with tons of voice memos. 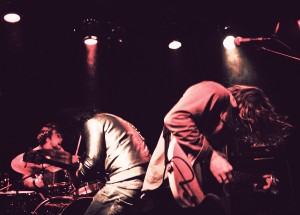 We each take them home and listen, write, rewrite and then bring them into the room and start working through structure, arrangement and dynamics. It can be aggravating trying to navigate through writinga new song, but once the structure and arrangement begin to take shape; well that there is the pay­off.

Do you consider life a waking dream or a dream within a dream or a wake up call?

Ryan: Life is just something that’s happening to us all. You don’t have a say incoming or going, your just here and it’s up to you to choose how you want to experience it. Jamie: All perspectives/interpretations of life are worth investigating to some degree. I feel like I mostly function on a musical level. Music is humanity transcended. A musician will sort of dream up a musical piece and put his dream out in the world for people to experience and be moved by. I take that, am totally inspired by it, and try to dream up music of my own to pay back what I so enjoyed of music. I believe that when you read a novel or listen to an album, or whatever sort of art you experience, you are getting as close as you can to another human being’s consciousness. It’s so intimate and so abstract that the boundaries of “who’s dream?” “what’s reality?” “fiction or nonfiction?” are obliterated; you are in someone’s mind for a few moments, and they, in turn, affect your mind, and you walk around the world with new ideas that came from somewhere and are still yours, and you affect other people when communicating these ideas to them.

Do you prefer the jam out solos on “Hotel California” or “Free Bird”? Orare you more, like, Fu Manchu fans?

Ryan: I’m more influenced by songs like “Cowgirl in the Sand,” “MachineGun” and “Dirt.”

Jamie: I prefer the intro to Axis: Bold as Love

Ian: When Ryan jams out Star Wars licks in the rehearsal room…that’s the preferred solo.

Ever spent a lot of time isolated? Your music seems like each player is really in control of their sound and role, like…I dunno, Soundgarden or something. But like each of you brings what they have reflected on and mastered to the table and adds to the group.

Ryan: I think any musician who has reached a level where they have developed their own voice with their instrument has spent a lot of time isolated. Getting to that point is a long intimate process where for years it’s just you, the guitar and your imagination sealed off in a room. Besides that it’s a natural progression for people to kinda push you away while your learning to play, being around anyone who is just starting off on piano or guitar or drums can be fucking painful.

Jamie: True. We’ve all spent time in different bands and working on our own stuff, so we all bring different styles to the table. This new EP showcases our evergrowing efforts to unify our styles in a clever way. It’s our best release yet, for sure.Ian: I can only speak for myself, but spending time working out songs in isolation is where most of my work is done. I spend hours sitting with my bass in front of the computer. I take the most current voice memo recording of the song, load it into Logic and then start recording take after take after take of various ideas. Each take is a lot of jerking off and overplaying, but this is where I try and get most of it out of my system. I then go back, listen to and dissect takes, and figure out which parts work, why they work and how to craft them in a way that they help shape the song.

What has been your favorite live gig thus far?

Ryan: If you show up and your gear works, the house PA doesn’t shock you and there are some people who want to hear music and forget about everything else for a little while then that’s my new favorite gig.

Jamie: Not sure. Just always trying to make it better than the last.

What are you looking forward to in 2015?

Ryan: I think it’s gonna be a good year, I’m looking forward to this EP coming out and playing itlive for people. We have also been writing a lot lately so we’re planning on getting back in the studio later this year and getting to work on a full length. We also have a van now so it will be great to get a couple tours in.

Jamie: Another year of the struggle.Ian: I can tell you what I’m NOT looking forward to; the forthcoming Kanye / Sir Paul McCartney collab… Fucking whack. 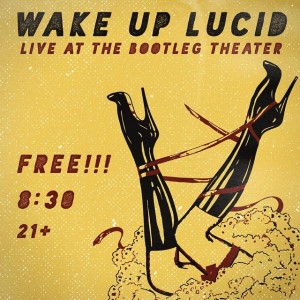 More News On Wake Up Lucid:

More On: Alternative Metal, Exclusive, Wake Up Lucid,
share on: