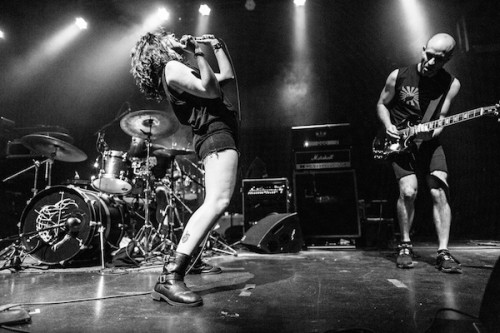 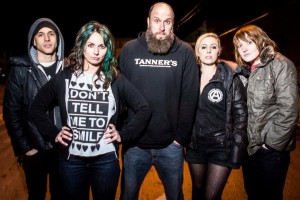 “Servilia” makes for such an anthemic opening song. Your voice is so empowering. It gives me similar chills inside like I used to get listening to The Gits, and I mean that with huge respect. How’d you pick that for the lead track on the LP?
We struggled to pick the 1st song. We played with the order a lot, but everyone involved with the record who was not in the band thought “Servilia” should go first. At some point, you just have to accept maybe you’re just too close to it, and that’s OK – to trust the opinions of people you respect.

How’d you get involved with Bridge Nine? Probably my favorite hardcore label and you’re in great roster company.
We sent them and a few other labels our 1st e.p., “Improvised Weapons,” and a demo of some of the new songs. Bridge 9 has always been our first choice, actually. You can tell they do this because they love music, it’s not just a business for them, which is great. Thank goodness they were interested in us! And we’re very happy to be label mates with our fellow Baltimoreans, Octaves, and our friends in Lemuria.
Lemuria rules. I have their sticker on my car. I heard your NYC show over the summer with Propagandi was very good. How was the experience?
What I mostly remember from that show is loading up and down a huge, historic flight of stairs! As I write this, we’re actually on our 4th tour with Propagandhi (through Texas and Florida). We feel so lucky. They’re incredible musicians, their songs rule, and they’re nice and funny and all that good stuff. It’s really a very unique tour experience. That’s why we say “yes” every time they ask us to go out with them!
I was wondering your opinion about the Rolling Stone rape campus article retraction. It wasn’t as if the college system didn’t need a gross share of sexual abuse advocacy overhaul anyway!
I’m not surprised that anyone with power in that situation handled it poorly, because historically, that is what usually happens. Personally, there were too many horrible stories of injustice and violence being reported on during that time that I had to make a mental health decision to not follow that particular one. It was too much for me. But I can say the most important thing anyone can ever do is believe victims. Statistically, gender-based violence is under-reported and the conviction rate is extremely low, all the while victims are shamed and blamed. Victims gain nothing by falsely reporting and the likelihood of it even happening is on par with all other crime reporting. It is not more common, so we should believe someone just as fully if they say “I was raped” or “I was robbed.”
Did you wrestle in “Say It” with the chance of someone hearing it who is still too traumatized/fragile to confront their rape(s) yet?
I didn’t wrestle with the decision because for me it was the right thing, the necessary thing. That doesn’t mean I’m ignorant or insensitive to the possibility of it triggering someone. We’ve played that song for a year or so and I see people eyes go wide when they realize what I’m singing. Some don’t know if they should look me in the eyes. But after we play people tell me “thank you” for singing “I was raped” loudly and in peoples faces, unapologetically. Some have even told me they started crying, but in a way that was healing….I really hope it can serve as an empowering statement. If our show can be one place where you feel safe enough to sing along with me, to share your truth, to not be silenced…then that’s really powerful. I certainly don’t take that lightly. Something that people who don’t experience gender-based violence need to witness, even.
[youtube]http://youtu.be/GPgxRfm5QTQ[/youtube]
How do you feel social media helps activists and is it more important to do “offline” activism or online hackstivism or what not? In that regard, how do you view the Sony hack controversies?
They go hand in hand. You can’t isolate yourself online and expect to stay connected to the people and the energy offline and on the street. Now, some people can’t attend events or workshops or rallies, etc, because of work, caring for loved ones, lack of access to transportation or having a disability, and that’s OK. By the same token, not everyone has access to the internet. I believe in diverse tactics. The most important thing is that everyone who can do something, should do something.
I recall when punk bands like Pansy Division, L7 or Tribe 8 and even Op Ivy were amongst the most heralded in the “scenes”. Why did politics become secondary to shit worthless break up songs? I mean, I’ve written some myself but political songs are way more important! haha.
I’ve written my fair share of breakup songs, too, don’t worry! We can’t all be writing political songs, but we can and should support people who do. Like, don’t put all the political bands on one bill, you might be preaching to the choir, so to speak. Instead, keep it varied, expose people to social justice issues and stay informed! 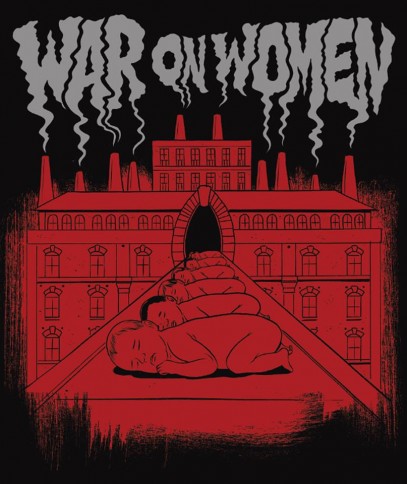 How can progressive punk music reach across the aisle and engage more conservative listeners in opening their minds to a more non-partisan yet rational and fact aware manner of thinking? Everyone is human, even if they leave a putrid carbon footprint.
That’s not my job. People duped by lies in mainstream media probably won’t hear us, but if they do I am hopeful that they wanna head bang to our music. And maybe some of what I’m screaming will seep into their brains. But I’m singing from the perspective of a traditionally marginalized group of people, so I’m not fucking reaching across anything. I’m saying my piece.
Here’s one re: “Roe V. World”. I lost twins. The mother couldn’t bring them to term due to a health condition. Hardest thing I ever went through. We would have loved them if it had been possible. I have memorial pieces for them on my body. Do you think any pro life advocate has a right to tell us we are going to hell?
Obviously no one should be judging you on your private health care needs and decision, but rest assured – hell doesn’t exist, so you’re all good!
[youtube]http://youtu.be/3keAS0zTIsE[/youtube]