Panzie* are not just hard rock, not just metal and not just sleaze glam. Throw all that stuff in a bag of snails and puppy dog tails (with maybe some booze, pills and brass knuckles) and you’ll be pointed in the right direction. Really though, it is a disservice to this crew (one of NYC’s truest, trailblazing rock n’ roll groups) to stamp the same old tags on their huge,mean sound.

Panzie* will remind you when the Lower East Side was dangerous and have the riffs and true grit to back up their stage looks. Building a steady buzz in the North East as an insider’s party band, they are ready to conquer the streets with the arrival of their antcipated debut “Love & Blood.”

Click HERE for an interview with guitarist Jonnie Rockit of Panzie* about what went into the making of “Love & Blood” and the backstory on this rough and tumble group.

Morgan Y. Evans: When you cats started Panzie*, what was the band’s goal? How did it all start and did you ever think you would come as far or have as many crazy times as you have had? Can you elaborate as much as possible in your answer?

Jonnie Rockit: We just wanted to play stuff we wanted to hear at the time. Tired of all the same ol’ same ol’ in NYC, so we fixin’ to change that!

MYE: “Love & Blood”, your debut Panzie* release, is finally out. What was it like making the record? You poured a lot of passion, partying and vitriol into it. The band has a dangerous element I think has been lost on a lot of hand crafted or hip bands that don’t really live rock n’ roll all the way. Not that every band needs to “rage” all the time,but you guys are the real deal and not only believe in what you are doing but know your music history and can hang tough with any rock band.

JR: Dude, we hang hard period. We rage when it’s right. When it’s business we are on point with it. We don’t slack, we don’t budge and we live rock n’ roll. We breathe it, eat it, shit it, piss it, but we like to say that we are unlike predecessors… we like to play things smart. It took us a year to finish the Album with Stacy Odell, our producer. We had parents die in the middle of it. Hardships everywhere,. Thank God for it, though. If we didn’t have our music, dealing with those kind of issues would of been alot harder! (Laughing) Hence the Name “Love & Blood”.

MYE: I like how you guys can mix it up loud one minute and also switch modes. I remember how cool it was one year after seeing you guys play a loud set then later that night elsewhere you played an acoustic gig post-Joey Ramone birthday tribute near Irving Plaza. I think that was the same night you guys played with She Wolves when I was singing backups for them. But I was really impressed by how embedded you are in the real NY underground. Care to talk about your approach to music?

JR: Man, like I said, it’s just something we would like to hear. Before Hawaiian, DC and I started Panzie*, I was a pro guitar tech for almost 10years. I was just sick and tired of the crap that was being cranked out in the early 00’s. Ughhh, it was like READY! SET! TERRIBLE!(laughing). We like to keep our music versatile. It’s heavy as hell, but chicks can dig it, and dudes can get their angst out. You can hum melodies we make or you could bang your head or stomp your feet. It’s fun music to play and to listen to. Why not be embedded in the LOCAL NYC scene if you make people want to dance and have a good time? It’s a crossover of sort, i guess… what we play. But let’s get one thing straight: We love the NYC scene and we are a NYC band but Panzie* wants to be national, hence international! 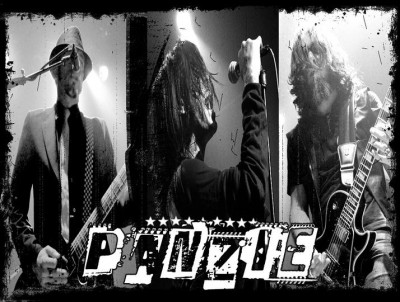 MYE: I love NYC even though it always changes. I am listening to “NY Is Killing Me” by Gil Scott Heron and Jamie XX as I type this. Everyone has their own “NY” and then there is the real and multi-dimensional eternal “NY” archetype and then the real world. What is Panzie*’s NYC like? How can you distill your complex relationship with the Big Apple for us? I think of you guys as a true blue NYC band.

JR: Thank you! Well, NYC growing up was a lot more hardcore, real NYC, you know? Even though I’m from Manhattan, I know about all the 5 boroughs, the different NY accents from Upstate to Long Island. I love NYC. Where else can you get delivery at 4am? Or have bars open till 4am? (Chicago) which kicks ass in its own right. It’s bright lights, tall buildings, multi ethnical people, the hot women, the booze, the loud music. You put that with the history of Rock n’ Roll in NYC and you have the right concoction to spawn a band Like Panzie* in this day and age

MYE: Were you guys working with Biohazard briefly? I heard a rumor about that? Did I make that up?

JR:Na, We have friends in the band Biohazard, that’s it.

MYE: What are you most looking forward to about 2012 for your band?

JR: Well, We are gearing up for radio play and touring. 2012 is Panzie*’s year, spreading the gospel of “Love & Blood”. Eventually, tour the country, then the world!

MYE: What Panzie* songs mean the most to you message-wise? What is funnest to play and what also stands out as lyrics the band all agree on or really feel when you are rocking out?

MYE: I was reading a book called “The Diamond Age” by one of my favorite Authors Neil Stephenson and it is in the future. He talks about how, in this made up future, national boundaries collapse when economic systems and information exchange evolve in a way that can’t be controlled by borders anymore. It talks about many cultures living together in a post-post-modern clusterfuck. The cultures that survive, similar to some religions or even endangered species in real life, are the ones people pay attention to keeping the traditions of alive, like oral tradition in Native American times, almost. I thought it was a cool metaphor for how music is nowadays as well. With the internet, people know a lot more of everything but sometimes it is sound bytes and jumble with no history attached. Hardcore bands and real rock bands know their roots and keep promoting to keep that culture alive. I think Panzie* really adheres to the rock n’ roll spirit of great bands like Motorhead or The Ramones or The Dictators. You guys are out for blood? Thoughts?

JR: Wow, this is a real great question. When we started Panzie*, we wanted to go back to the basics, a real meat and potato band. Loud, heavy, deep guitar sounds, heavy bass sounds , driving drums sounds, raw vocals… BUT we want to be up to date about what we do, how we sound and how we go about things. Personally it’s like someone handing me the torch and i’ll carry on and learn from other peoples experiences. We are bad ass! But i dont think we are assholes! And who cares? It’s about the music, right? I also think rock n’ roll in post apocalyptic culture will sort of end up like in a “Mad Max” movie! and we will be runnin’ in dune buggies with AK-47’s bolted on to them blaring Slayer! etc!

MYE: That’s the dream. What do you think have been Panzie*’s biggest victories or best shows and/or worst times so far? What do you want to say to people who are virgins to your band?

JR: Selling out Mercury Lounge over capacity (which the openers helped with considerably) for our record release party, on Oct 28th 2011 last year. That and opening for Eve to Adam this year on Jan 7th when we opened the show at Bowery Ballroom. We drew 200 people at 9pm. WOW!