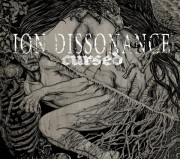 Canadian death metal outfit Ion Dissonance have posted a new song “The More Things Change The More They Stay The Same,” from their soon to be released album “Cursed.” The song is available for streaming on the band’s myspace page. The new album is due to be released August 24th in North America through Century Media.

For a track listing of the new album click here.

Track Listing
1- Cursed
2- You People Are Messed Up
3- The More Things Change The More They Stay The Same
4- This is The Last Time I Repeat Myself
5- No Care Ever
6- After Everything That’s Happened, What Did You Expect
7- We Like to Call This One…Fuck Off
8- Can Someone Please Explain This to Me?
9- Disaster in Sight
10- This is Considered Mere Formality
11- This Feels Like The End…
12- They’ll Never Know