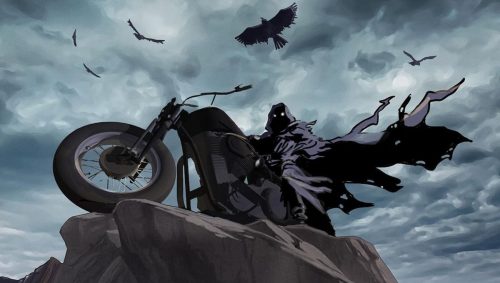 The Iron Maiden machine has gifted us with another future classic, the massive new song (and accompanying epic animated video) “The Writing On The Wall”. While I liked the band’s last few efforts, this single struck me as the most classic feeling number in awhile. No shade on The Book Of Souls or The Final Frontier intended, as both have plenty of rad moments like the galloping “Speed of Light” and larger than life, cinematic “Starblind”, to name two jams. But something about this new song just hit me like OLD Maiden. It is super easy to sing along with and has such an adventurous 80’s feel and a larger than life, grandiose video steeped in Maiden lore of (cough) Biblical proportions. I would kill for a whole record like this if the band has one more in them before the writing is, indeed, on the wall.

Bruce Dickinson conceived the video in conjunction with former Pixar executives Mark Andrews and Andrew Gordon. It was eventually produced with the London-based animation studio BlinkInk and does not fall short.