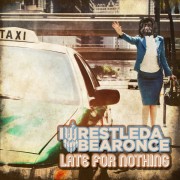 Experimental metallers IWRESTLEDABEARONCE have announced their newest single, “Firebees” off of their forthcoming album Late For Nothing, which will be unleashed on August 6 via Century Media Records.