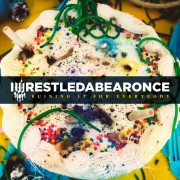 Louisiana extreme metal act, iwrestledabearonce, have released a music video for their song “I’m Gonna Shoot,” off their upcoming album “Ruining It For Everybody.” The music video is a live performance of the band in Mexico.

The new album will be released on July 26th via Century Media.