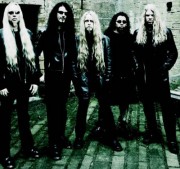 Nevermore guitar player Jeff Loomis and drummer Van Williams have announced their departure from the group. Both had been with Nevermore since the band’s first album, 1995’s self titled, “Nevermore.” The two have released a joint statement:

“In a mutual decision Jeff Loomis and Van Williams have decided to leave Nevermore. The time has come to pursue our own paths from the group. Due to internal struggles and ongoing issues within the band, we feel it is our time to move on. We would like to thank all of our fans around the world for their years of love, support and enthusiasm. This was not an easy decision but a very necessary one at this point, may we all meet again someday, somewhere in time.”