Metal Blade Records had this to say about the album release:

“With the critical praise and fan adoration bestowed upon 2009’s Ruination, it would have been easy for the band to rest upon their proverbial laurels and serve up Ruination Part II. But from the moment Demonocracy roars to life it is wholly evident that this is a far more musically accomplished beast that takes their signature sound to the next level. From the abrasive blast of opener ‘Children Of Deceit’ to the disconcerting strains of ‘The Deity Misconception’ or the brooding, heart wrenching closer ‘Tarnished Gluttony.’ A record drenched in equal parts misanthropy and naked rage, and from start to finish they suspend the listener by the throat.

A key factor in this progression was the change in the band’s ranks, which finds vocalist Jonny Davy, drummer Jon ‘Charn’ Rice, and guitarist Al Glassman joined by guitarist Tony Sannicandro, who met Al when he was a session guitarist for Despised Icon and filled the slot vacated by Thompson. In addition, Cephalic Carnage bassist Nick Schendzielos replaces Brent Riggs. Having initially brought Sannicandro and Schendzielos on as touring musicians, the members immediately gelled, and first wrote together on 2011’s Gloom EP, sealing the deal and securing their places as full-fledged members of the band.”

Guitarist Tony Sannicandro believes he made a very natural addition into the band’s ranks, and he’s proud to bring his intricate style to Job For A Cowboy’s instantly recognizable sound. “I think I bring more of an old school guitar approach to the band. Obviously before the band got me there wasn’t a lot of lead work. On the new album has a solo on every song. I think I’ve done the best work of my life on there,” he states. Equally, no one can doubt Schendzielos’ musical pedigree and formidable skills, and the bassist is looking to really make a mark through his work with the band. “It’s really invigorating that the cats in JFAC are into my style because there is such a great expanse of uncharted territory for bass in metal,” he states. “Cephalic is notorious for our chaotic and vigorous live performances alongside an expansive and dilatant range of metal stylings. I’m bringing all that experience with me and combining it with the talents of these splendid men to make my best bass work to date.” 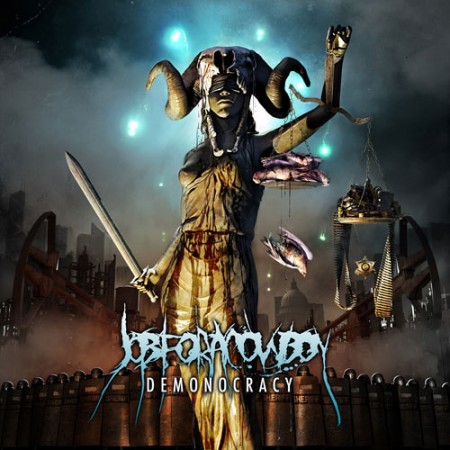 More News On Job For A Cowboy: