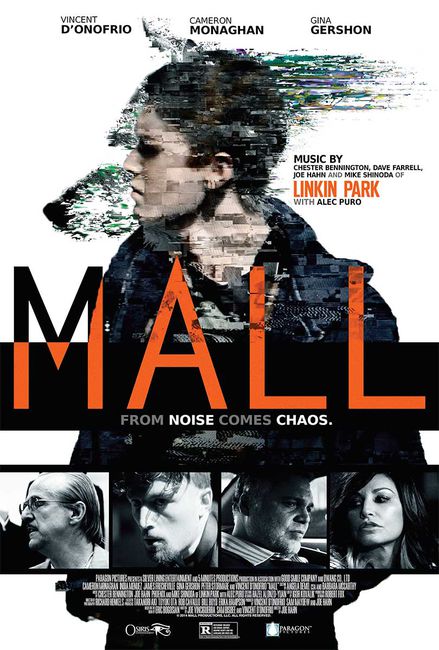 Mall, the debut feature film by Joe Hahn of Linkin Park, will appear in theaters nationwide starting this Friday, October 17th. Co-starring Vincent Donofrio (who pulls triple duty as star/producer/screenwriter), Gina Gershon (Killer Joe), Cameron Monaghan (TVs Shameless), Mall examines a group of disgruntled suburbanites who find themselves at a shopping mall in the midst of a seemingly random shooting. The film will also be made available for purchase through www.mallthemovie.com on the same day of its theatrical release via Paragon Pictures in association with Silver Lining Entertainment.

For more information regarding tickets and theater locations, visit:

As a member of the multi-platinum Grammy-winning rock band, Hahn is responsible for the beats, programming and keyboard heard in Linkin Park. He has also directed as many as 30 of the bands ground-breaking music videos, and over a dozen short films and music videos for other musical acts. Now Hahn is making his full feature directorial debut with Mall, featuring a script adapted from Eric Bogosians 2001 novel of the same name by DOnofrio, Joe Vinciguerra, and Sam Bisbee. “I find it refreshing to see this kind of point-of-view in contrast to today’s society that interacts digitally”, Hahn recently explained to Mashable. “When I read this script, it felt real and refreshing to show how ugly people can be as they hide their inner beasts after cracking their facades.”

Billboard recently premiered an exclusive teaser clip from Mall, which can be viewed here:

Earlier this summer, Paragon Pictures, led by Evan Crooke, picked up the North American rights to Mall. As the theatrical distribution division of Osiris Entertainment , Paragon Pictures will release Mall nationwide. More information about Mall can be found through Facebook.com/MallMovie and Twitter at @MallMovie.