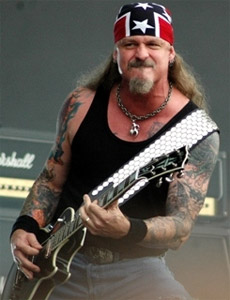 John Schaffer from Iced Earth can get in the garbage, but it seems he is already there. The reptilian fearing,  delusional Confederate Flag apologist is cool with marching with Nazis and trying to overturn a valid election – the safest in history – to disenfranchise the black vote. Now the police are looking for him. Why hasn’t anyone done a wellness check on this dude on a regular basis for years now?

I regret every time I have ever supported this band in the past , including a cover story for New Noise. You’ll never be Maiden. Go crawl up Set’s mystical snake asshole. Sons Of Liberty is dumb as fuck. Sure you have a super nuanced view of social issues when your band’s best singer literally quit to be a cop. LMAO.

An almost even bigger fuck you to edge lord indie m*th connoisseur / revenge por* burn out Ariel Pink, who not only supports Trump now but also emotionally blackmailed my partner Globelamp once by telling her if she ever mentioned him in public for verbal abuse that he would go and publicly support accounts run by supporters of her abuser, despite knowing the sites are full of slander against her. Even stupider, he once gave her career advice and told her that you can’t go around saying whatever you want in life all the time and expect to be taken seriously (she has the screenshots)…then goes from mansplaining to supporting known civil conversationalist Donald Trump. 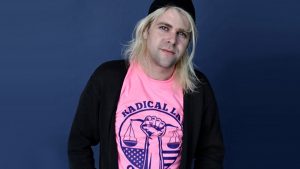 If you march with Nazis, you are condoning them. Period. Ariel is also Jewish, so it is extra fucking stupid.

If you are into telling people that the Dems were really behind slavery, I hope hundreds of years later you also are cool with showing people 13th and how in bed with prison for profit the GOP have been and remind everyone of the Southern Strategy, among so many other things. Also, calling out Biden for his racist policy history is fine, as it is with the Clintons. That doesn’t mean Biden hasn’t improved a lot on the issues compared to Donald FUCKING Trump (who literally tried to take credit for a black man’s economic gains and started the racist birther movement). The ‘tear gas the peaceful protestors for racial justice for my photo op’ guy.

There is no place in America where white, cis male entitlement is “the real victim”. BLM would never have gotten so far into the capital yesterday and with a MUCH more valid reason to be mad at institutions that have failed them.

Pink is claiming how he was there to ‘peacefully support the President’, as if supporting grifter mafia slimebag Trump in any way is acceptable at all?!!

Hope you both enjoy the Maga sewer, you fucking traitor loving flops. Shut the fuck up, pay some taxes for a social safety net and realize you are privileged lala land loving clowns.

Just in case you wanted to know, and like, not give a shit about the band anymore pic.twitter.com/21Vr2yC3nX

Fuck Ariel Pink. Seriously his best ideas were always ripping off someone else… creepy little fascist Shitbag from Beverly Hills. raised in a god damn cage… mother fuck him