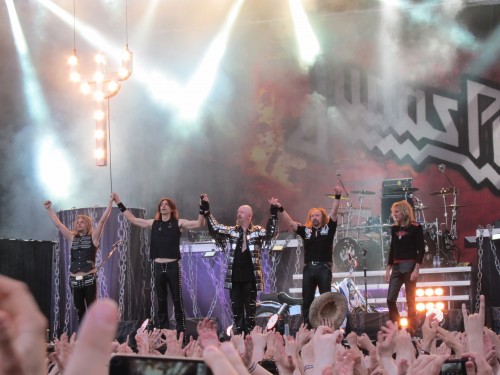 Sad Wings of Destiny turns 40-years-old on March 23 and to celebrate this mammoth fucking album, I present to you a retrospective on it!

Sad Wings of Destiny is Judas Priest’s second album. It is the only album which features drummer Alan Moore. That year Kiss’s Destroyer came out, Rush released 2112, AC/DC released High Voltage internationally and Dirty Deeds Done Dirt Cheap in Australia, Black Sabbath released Technical Ecstasy and Deep Purple broke up. But for Judas Priest, things were just taking off. Off the back of Sad Wings of Destiny Judas Priest signed to CBS Records and got 60,000 pounds to record their next album Sin After Sin, which came out the very next year.

Read the full retrospective of the album here.

Sad Wings of Destiny opens with two of Judas Priest’s strongest, most powerful, most energetic tracks. Starting with “Victim of Change” the listener gets dragged down with the guitar into whatever hellish land the angel on the cover has found themselves in. This song keeps me banging my head from start to finish. It chugs so rhythmically and with such insistence, it can’t be ignored. The solo work is to be accepted and K.K. and Glenn don’t disappoint, of course.

And just as seamlessly as the song went smooth, it builds a bit of a rocker temperament as Halford belts out “CHANGES!” and we’re taken out on the same crushing guitar riff that brought us in. Halford growls and then insists “No! No! No! No!” and the song ends with a sustained scream.

“The Ripper” is a much shorter song, but packs no less of a punch. The song just has a certain groove to it as Halford sings, “You’re in for surprise, you’re in for a shock!” And then they track him screaming like only he can. The song is, of course, a story about Jack the Ripper, or, as it says in the song, “Or if you like Jack the Knife.”

The song goes out on another Halford shriek.

“Dream Deceiver” takes the album in a different direction, soft and archaic. It reminds me of something I might hear in the animated version of The Hobbit (which, on a side note, is a worthwhile movie to watch if you’ve never seen it).

“Dream Deceiver” seems more psychedelic than NWOBHM, like something you might here at Woodstock or out of The Doors discography.

“We followed the dreamer through the purple hazy clouds // He could control our sense of time // We thought we were lost but no matter how we tried // Everyone was in peace of mind.”

Halford spends the song softly crooning at you. The music is a thick atmosphere to drive you into the same fevered dream as that of the songs protagonist.

“He said in the cosmos is a single sonic sound // That is vibrating constantly // And if we could grip and hold on to the note // We would see our minds were free… oh they’re free.”

Halford sings the last stanza in a high-pitch:

From there sit back and let the guitar riffing take you to a different plane, maybe you too can find and hold on to that single sonic sound and set your mind free.

“Deceiver” picks up musically where “The Ripper” left off but continues the lyrical themes of “Dream Deceiver.”

“Solar winds are blowing // Neutron star controlling // All is lost, doomed and tossed, at what cost forever”

It’s as if the protagonist of the album has been hurled from the soft dreamscape of “Dream Deceiver” into the very center of a black hole.

“Deceiver” plunges right into the two minute instrumental “Prelude” (which, in later pressings of the album is the actual prelude and the beginning of the album, but which in the original pressing was the start of the B-side).

For anyone who may say piano has no place in heavy metal, I defy them to listen to Glenn Tipton’s pounding piano on “Prelude”.

The soft “Prelude” plays into the chugging “Tyrant”.

The theme of “Tyrant” seems to take a much different approach than “Dream Deceiver” or “Deceiver”.

“Behold ‘tis I the commander // Whose grip controls you all // Resist me not, surrender // I’ll no compassion call.”

The way the chorus is layered, with one track of Halford singing “Tyrant” in a dragging down way while overtop that plays, “Capture of humanity // (Tyrant) Conqueror of all // (Tyrant) Hideous destructor // (Tyrant) Every man shall fall.”

“Your very lives are held within my fingers // I snap them and you cower down in fear // You spineless things who belly down to slither // To the end of the world you follow to be near.”

“Tyrant” is followed up fittingly by “Genocide”.

The song begins with the lyrics, “Mercenary battalions // Are poised to strike us down // Terminations conquest // Upon us now full grown.”

Check out the vocal effect used for the line “Sin after sin I have endured // Yet the wounds I bear are the wounds of love.” Halford sounds like some celestial being.

“Epitaph” brings back the piano. It is probably the most unique song in the entire Judas Priest discography. If they tried to release this song or play it live in the 1980’s they’d probably had beer cans thrown at them.

Still, it is a beautiful fucking song. Halford in this song doesn’t scream or screech or growl – he simply sings, and at some points the rest of the band joins him in a chorus. It is the most vocally full track on the album (if not in the entire discography).

“The old man’s sitting there, his head bowed down // Every now and then he’ll take a look around // And his eyes reflect the memory-pain of years gone by // He can’t regain nostalgic dreams he’ll never see again.”

“With trembling hands, he wipes a tear // Many fall like rain, there’s one for every year // And his life laid out so clearly now, life that’s brought death // So nearly now life once he clung to dearly lets go.”

The song speaks of the inevitability of death.

“A lonely grave, and soon forgot // Only wind and leaves lament his mournful song // Yet they shout his epitaph out clear // For anyone who’s passing near // It names the person lying here as you // And you… And you… And you…”

Ultimately the album ends on a rocker – “Island of Domination”.

“They smashed through the clouds into the light of the moon // Their steeds were full charging, called destruction and doom // ‘Twas as if all hell had broke loose on this night // And all in all it was a terrible sight.”

The lyrics continue the fantastic theme of “Dream Deceiver” and “Deceiver”. “Sky rider, you supersonic flyer // Night driver, you demon of desire // Spine snapper, you tried your best to break us // Throat choker, you thought that you could take us.”

This album does a fantastic job of showing Judas Priest (and each individual member’s) fantastic range. It makes sense that this is the album that helped to get them signed to a major label. It’s huge and powerful – but it’s not afraid of its softer and more melodic moments. It literally crushes you into the ground and sweeps you away into the far reaches of the cosmos. It discusses alcoholism and tyranny. And yet if you just slam it in and drive down the road and into the sunset, all you might think about is the way you can’t stop banging your head.

This album gets five out of five fallen fucking angels.