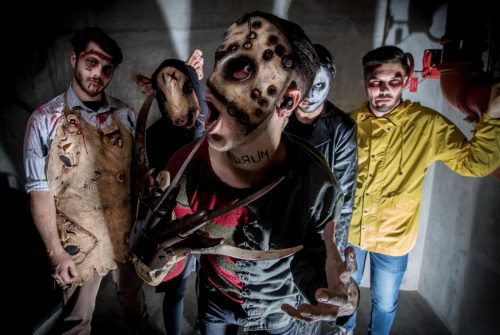 Only a mother could be proud of…ok, that’s not fair. We are all proud of Ice nine Kills.

During the mammoth #FearlessAtHome live stream event that took on Saturday, horror themed theatricore outfit, ICE NINE KILLS celebrated the 40th Anniversary of classic horror movie, Friday The 13th, with the debut of “Jason’s Mom” – a very special, acoustic parody in honor of one of the deadliest matriarchs in movie history, just in time for Mother’s Day. They dedicated the performance to Adam Schlesinger whose genius song writing and smash hit, “Stacy’s Mom”, provided the inspiration for the song.

Speaking on their re-imagining of the Fountains of Wayne classic track and the 40th Anniversary of Friday The 13th, INK frontman, Spencer Charnas says

“Today marks the 40th anniversary of Friday The 13th and with tomorrow being Mother’s Day, we thought this acoustic cover would be the perfect way to celebrate. We want to dedicate this to the memory of the inspirational songwriter Adam Schlesinger, who co-wrote this amazing and enduring pop song for Fountains Of Wayne.

We hope all the Moms out there have a truly killer Mother’s Day. ”

Ice Nine Kills also payed homage to Friday The 13th with this month’s Nightmare On The Ninth merch drop. The ‘Mommy Knows Best’ collection celebrates Forty Years of Friday and is available for a limited time from NightmareOnTheNinth.com The movie was also the inspiration for their track “Thank God It’s Friday”. Taken from their 2018 opus, The Silver Scream, the track has clocked up 2 million YouTube views and 9.6 million streams on Spotify since it’s release.