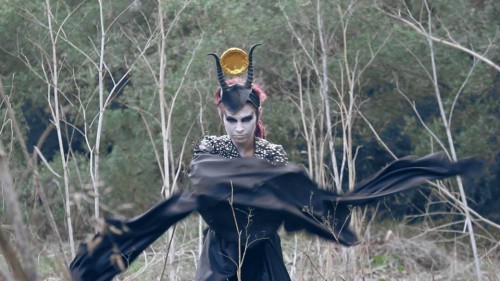 Karyn Crisis was pretty much the first female vocalist to do experimental sludge/death metal.There’s Dawn Crosby (R.I.P.) from the too often forgotten Fear of God, but she was nowhere near as heavy. Karyn’s vocal work with Crisis, Ephel Duath and as a guest on records ranging from Giant Squid to Six Feet Under is as cathartic and poetic as extreme music gets. Recently she has also been expanding her life focus to include holistic healing and her ever growing visual creations. Karyn is just a one of a kind force of nature and is finally ready to create a solo album under the banner of Gospel of the Witches.

It’s been a long-time in the making, but we’ve finally arrived at the right moment to record the Karyn Crisis solo project album and it seems as though all the stars have aligned to bring me 13 songs and a stellar group of unique and talented musicians to bring them to life. After 13 years touring with my former band Crisis, I’ve found myself emboldened and driven to not only sing, but to have a hand in creating the atmosphere of my own solo project, Gospel Of The Witches. I decided to name the band, rather than use my own name, because this is not a continuation of Crisis; it’s a continuation of my life story and experiences. I’ve come to you (fans) for funding for this album instead of going to the music business, because it’s you who’ve stayed in contact with me all these years, and it’s you who knew in a heartbeat what you thought of my voice and my expression. It took the music industry 13 years to begin to figure out what they think of me, and I’m sure I still don’t fit neatly into a genre or category. But according to you, I’ve been a part of your lives, your struggles, your triumphs, and your days. – Karyn Crisis

The project will feature Ephel Duath’s Davide Tiso, Intronaut’s Danny Walker and “Death Choir” additional vocals from Immolation’s Ross Dolan ! Holy fuck! AND it will be produced by Jamie King (Between The Buried and Me).

Click HERE to check out Karyn’s Kickstarter project video and the great fan rewards, including .