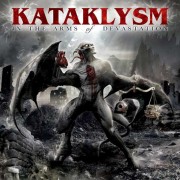 Canadian Death Metal band Kataklysm announced details on their new DVD “The Iron Will: 20 Years Determined.” This album will celebrate the bands 20th anniversary, and will be released through Nuclear Blast Records.  The DVD will also include interviews with a wide range of characters, including the band’s infamous first frontman Sylvain Houde, who sang on the first three Kataklysm albums: The Mystical Gate of Reincarnation (1993), Sorcery (1996), and Temple of Knowledge (1999).

To see what frontman Maurizio Iacono had to say click here.

“This is something that we are doing first for ourselves to look back at the long and hard road traveled and to be grateful that twenty years later, this band is stronger than ever and still means something in the music world. It’s an accomplishment to exist this long and this DVD is dedicated to our fans who solely kept us alive in this destructive and turbulent scene. I decided to scrap my book idea (it was taking way too long and time is of the essence) and instead tell our story on THE IRON WILL in detail to get things off my chest once and for all. We’ve been the underdogs for so long and looking back, this is a good a place to be.”

North American tour dates for Kataklysm’s headlining “Spread The Venom 2010-2011 World Tour“ with All Shall Perish, Decrepit Birth, Conducting From The Grave, and Abysmal Dawn are as follows: